Well this was an interesting bit of research.  Back in May of last year, I found a photo on eBay (can’t remember if someone sent me the reference or if I found it – if someone sent it to me, it was probably Bob Cunningham (thanks Bob!)) with the following description:

The photo was from a seller in Moscow, Russia so my assumption at the time was that the car was Russian.  Here’s the photo and of course I had to buy it – a Russian Press Photo from 1956 of a car that looks like a Victress…..who could resist??? 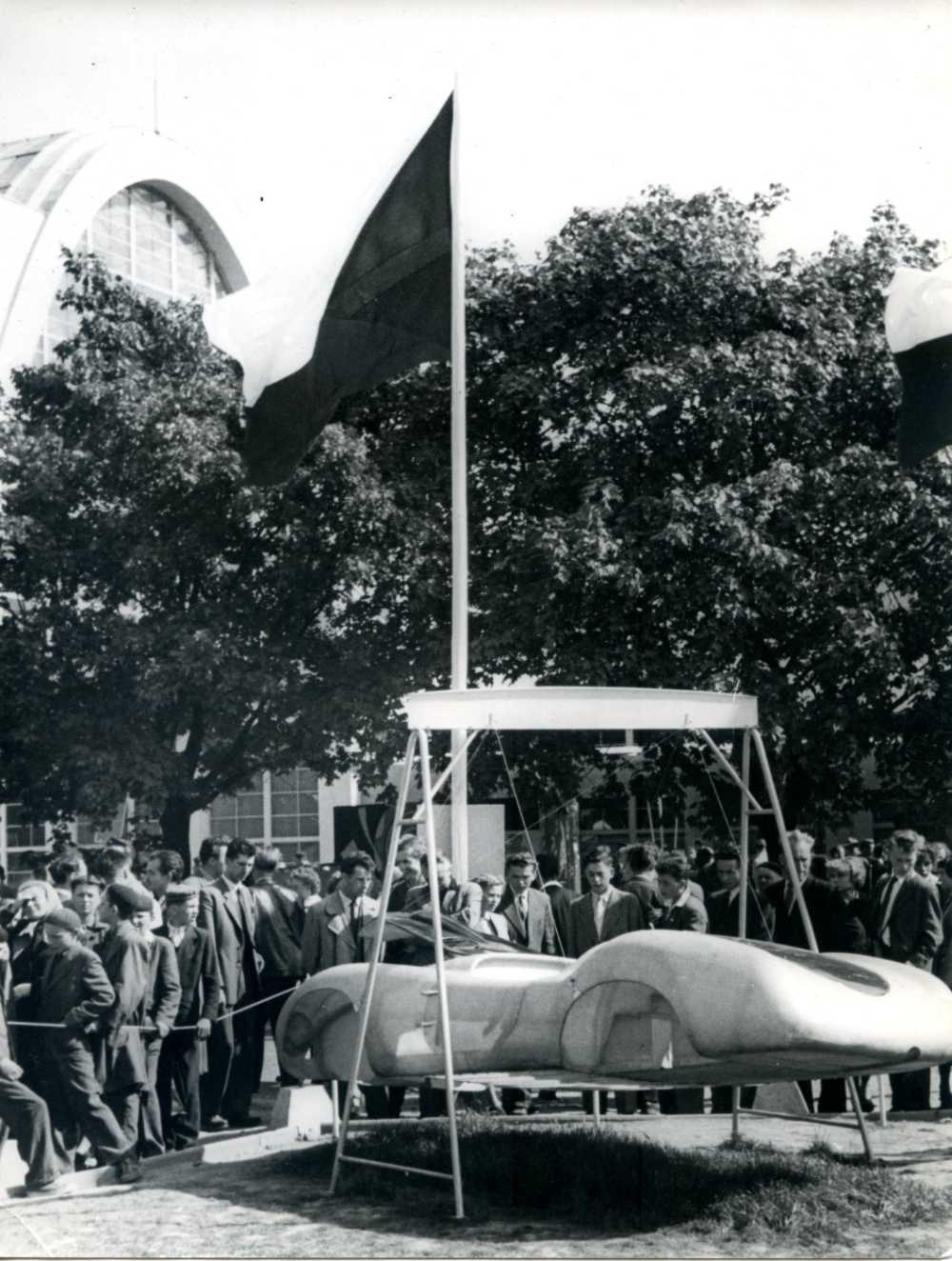 And here’s a close-up of the body.  You can see that the hood is open and the trunk has a round edge at the bottom: 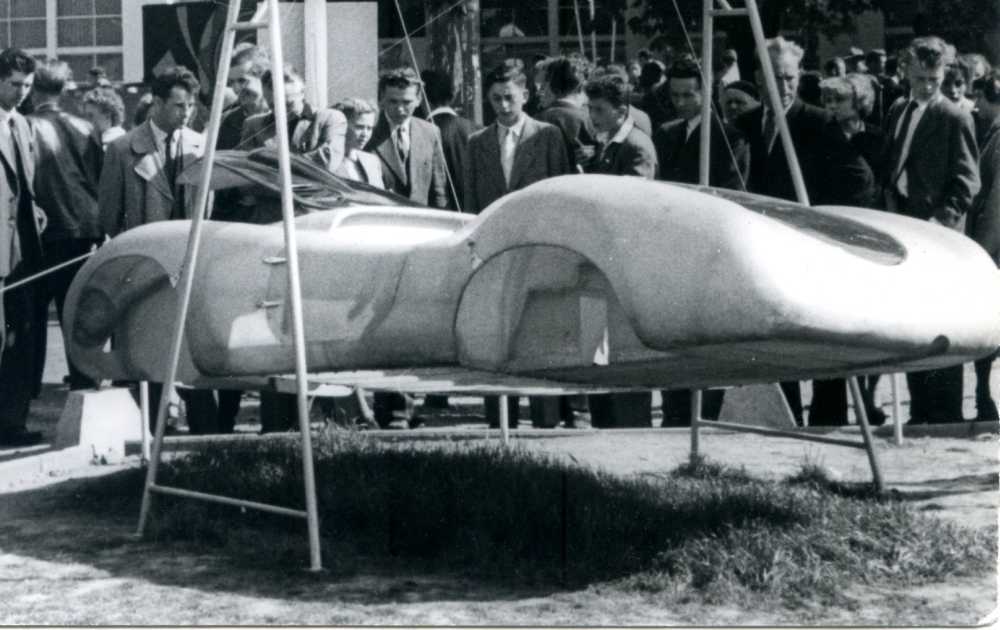 Perhaps I study these photos too long.  If you look closely at the photo above you’ll see that grass is only growing under the car body.  It looks like this was such a popular exhibit that people wore the grass out all around the body and they had to rope it off for the remaining part of the exhibit.  Just my guess gang, but fiberglass cars in America in the early 50s were rock stars – and so this may have been too.

Fortunately, the reverse of the photo had an inscription – naturally not in English. So…I contacted my good friend in Lithuania – Arunas Racelis – who maintains the excellent car website “AllCarIndex” to help with the translation (click here to visit Arunas’s website AllCarIndex).

Since the press photo appears to have been in Russian, Arunas was able to translate the text as follows:

Plastic body of automobile at the 2nd Czechoslovakian exhibition in Brno 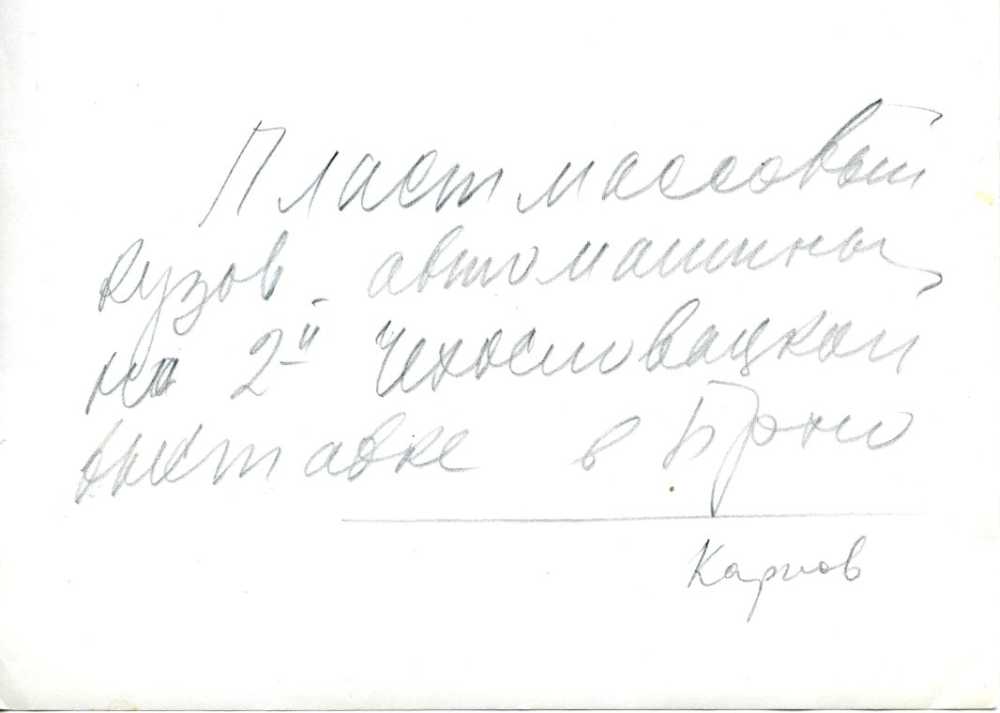 Apart from that, Arunas was puzzled.  He and his contacts in Russian/Eastern Europe have not seen the car before.  A mystery fiberglass car body from Eastern Europe…we might be looking the introduction of fiberglass bodies in eastern Europe.…Forgotten Fiberglass expands its reach! So….Russian car?  Czechoslovakian car?  Where in the world was Brno?

The 1956 Exhibition of Czechoslavkian Engineering

Poking around a bit on the net, I found a bit more info about the Brno Exhibition Center as follows (this is from Wikipedia):

The centre has 15 exhibition halls with a visitor capacity of 25,000–30,000 (maximum 60,000) a day. The city of Brno has a tradition of trade fairs, which is inseparable from the industrial development of the city into an industrial, scientific and logistics hub in Central Europe. Annual markets and trade exhibitions were held in Brno since 1243. As a result of the booming textile industry in the city, the first trade shows were held in the 18th century.

Since 1821 regular trade exhibitions were held in Brno. Wholesale merchants from Vienna, Linz, Saxony, Hungary and Turkey attended the annual markets in Brno, i.e. from the same regions as today.

104,000 visitors attended the Imperial Jubilee Exhibition in 1888, the largest exhibition held in Brno until that time. From 1922 – 1927 Brno Annual Exhibition Markets were regularly held Thanks to the tradition of trade fairs and an exhibition centre that is recognized as the leading trade show venue in Central Europe, the city of Brno, Czech Republic’s second business city, is also nicknamed as “The Capital of Trade Fairs”

This must have been quite an event to have a postcard of it – so of course I bought it.  This postcard came from “Hungary.” I included scans of the front and back of the postcard below, and you can see that the same building is in the background in both the photo of the car and the postcard below – a nice building in the shape of an “arch.” 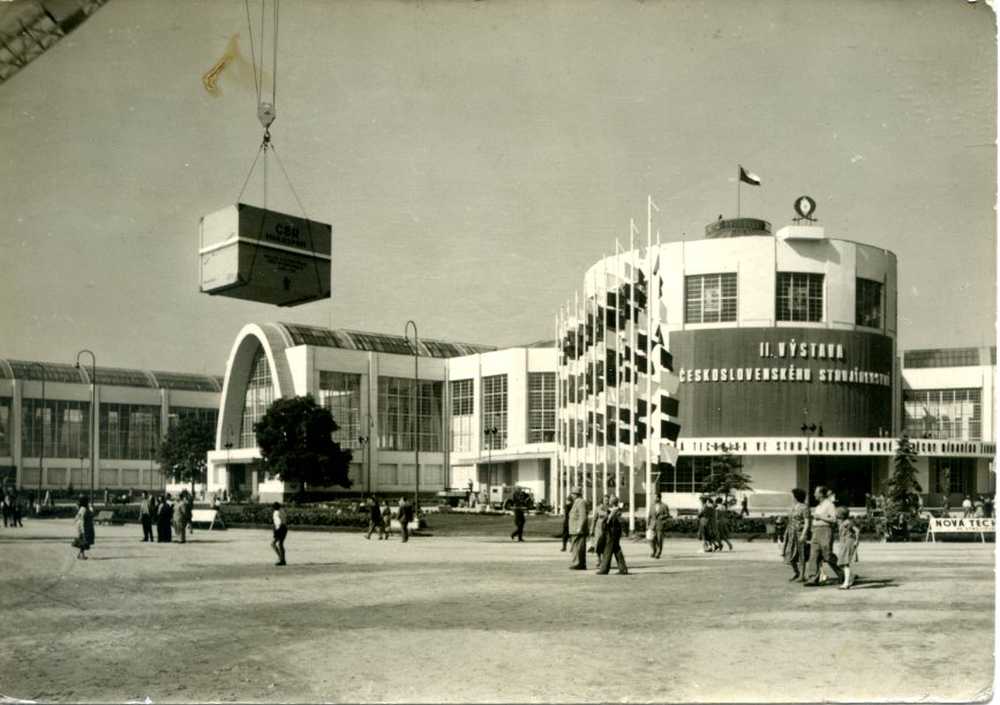 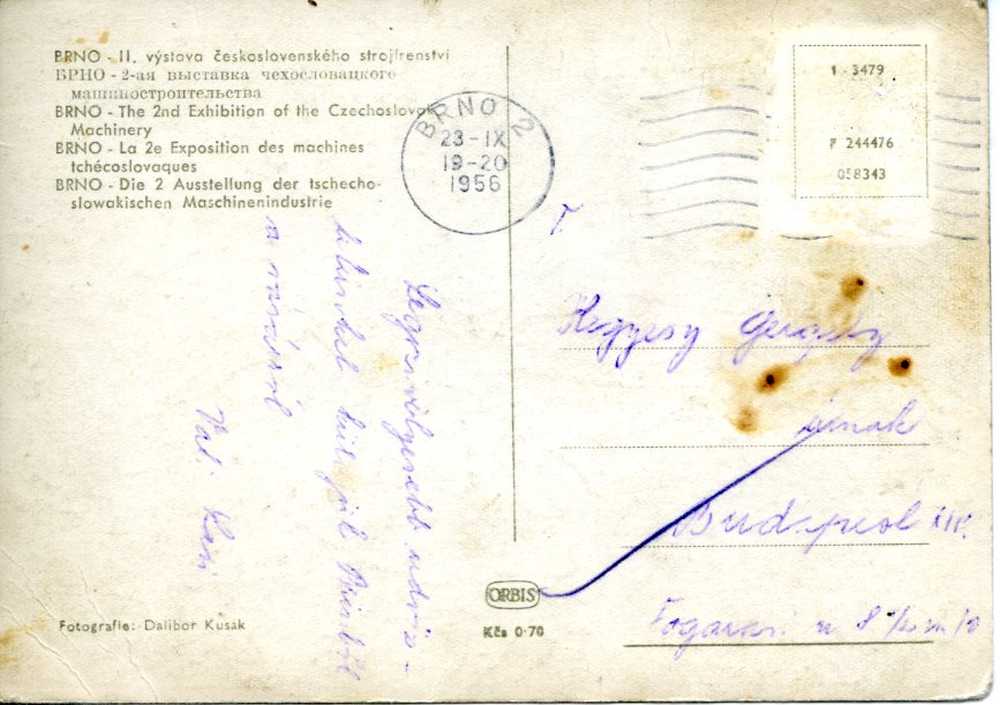 So…the next step is to continue looking for more information across the pond.  Perhaps some of our “Foreign Forgotten Fiberglass Fans” will take up the challenge and find out more about this interesting car body and whether or not it ever made it into an actual sports car.

If there was a press photo in 1956, there was an accompanying story that we do not have. And it’s that story that someone may find and forward to us in the future.  Which of course we’ll share here at Forgotten Fiberglass  🙂