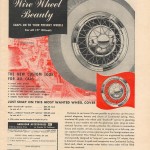 So the interior is restored, the body is painted, the engine is rebuilt, and what little chrome might be on your vintage fiberglass special is replated, repainted, or renewed.  Wha ‘cha gonna to do about your wheels?   Isn’t that a question you would ask if you were nearing the completion of your car – whether it was 1955 or 2010?  What kind of choice do you have in terms of being period correct about your restoration?  All of these questions are relevant and important to those of us restoring our vintage fiberglass sports cars.

Let’s start with some of what we can see from back in the day. 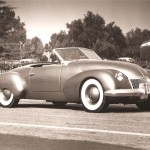 There are many articles that discuss hubcaps that you might have used back then, and one of the best was published early on in the June 1953 issue of Motor Trend.  Here they described 6 different styles of hubcaps and where you could have purchased them.    Back in 1953, the cheapest you might pay for a set of 4 hubcaps was around $25; the most expensive was close to $80.  For a car that was supposed to cost about $1000 to build, $80 was quite a bit of money for this extra bit of flair – but well worth it.

Glasspar G2’s, Woodill Wildfires, Grantham Stardusts, Allieds, Victresses, and more – all are seen in vintage pictures with nearly identical style wire wheel hubcaps.   The article below from Motor Trend points out an interesting fact – the wire wheel had nearly disappeared around 1935-1936 in America, but European sports cars kept on using them – and this was influencing American tastes.  So by the early 1950’s, American sports cars were often emulating the European look with wire wheel hubcaps. 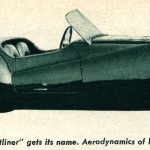 The Victress S1A Built by Virgil Rice and Used in the Movie “Johnny Dark” Looked Great With These Hubcaps – and You Can Still Buy This Style New Today.

Some people fitted their 1950’s sport specials with 1935 Ford wire wheels that were 16 inch in diameter.  This is still being done today, and I’m planning to do that with some of my cars.  And of course, you could find and purchase Dayton, Kelsey Hayes, Borrani, and other true wire wheels too.  I’ll post an article in the future about wire wheel choices – but for now we’ll stick to hubcaps.

Hollywood Flippers – The Exception; Not the Rule:

There’s a style of hubcap that originated with the 1933 Cadillac Fleetwood V-16 Aero Dynamic Coupe which was specially created for the General Motors Exhibit at the 1933 Chicago Century of Progress Exhibition.  These ‘caps were emulated for the earliest custom and sports cars from the late 1930’s thru the mid 1950’s.  Their use on American custom sports cars seems to have stopped around 1950, and from then forward they were mostly used on custom cars.  I’m working up an article on the Flipper hubcaps and will discuss these later – as they relate to the 1940’s American sports cars – the heritage of the 1950’s fiberglass sports cars.

As much as I’d like to say that the original hubcaps are easy to find – they’re not.   If you were going to keep a ‘cap from the 1950’s – it would have been from a car from one of the Detroit companies – Ford, Chevy, Chrysler , etc.  The aftermarket hubcaps were of less interest to enthusiasts and collectors, and for this reason – they are harder to find today. 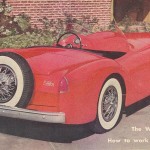 1953 Woodill Wildfire Shown With Hubcaps it Most Often Wears

So…if you want to “go for the gold…” then eBay and the website www.jalopyjournal.com is your match.  Jalopy Journal has a discussion forum much like ours and is called the “HAMB”.  Check it out and watch the classifieds.  I’m sure you’ll find what you’re looking for.

You can also peruse the listings (particularly on EBay) and look for what people are selling from back in the day.  I’ve found sets of three styles of the caps shown in the article posted below – and I’ve included some pictures of what these actually looked like as shown on eBay.  See the gallery below for more detail.

There are also newly made hubcaps – some close to the vintage style and some not so close.  These are easy to find if you search on the internet using “vintage hubcaps” as your keyword.  Here’s one website I’ve found showing some of these available that you can purchase new: 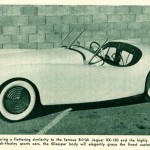 Look at Those Shiny New Shoes on that Glasspar G2 – What a Great Look for the Car. Who Will Use These First on Their Freshly Restored G2???

As Rick D’Louhy has told me time and time again….”wheels and tires” make a car.  Not just how they look but the stance of the car on the wheels as well.   I’ve found some thoughts on wheel treatment and restoration from the famous designer, Strother MacMinn, as well.  As identified on the www.coachbuilt.com  website, his words still ring true today:

A great Concours d’Elegance automobile is a combination of beauty, accuracy of restoration, and an indefinable melange of “star” qualities. But above all, a car must reflect its own period, especially in matters of color and decoration.  Strother MacMinn, a famous judge with strong artistic gifts, comments on taste: “Either choose chrome wire wheels or white sidewall tires but not both. Too gaudy.” He adds, “All classic cars were not red or cream!” (Two favorite colors of restorers which often show to advantage on a field). The best car may quietly state its own period with a delicate refinement, even with understated elegance, that, when new, would have reflected the buyer’s taste. Good judges will see this on the field.”

I think MacMinn’s words are right on target – especially for us today.

This was the Most Popular “Cap” Back in the Early/Mid 1950’s for Vintage Fiberglass Cars. Glasspar G2’s, Wildfires, Grantham Stardusts, Allieds, Victresses, and More – All Are Seen in Vintage Pictures With Wires 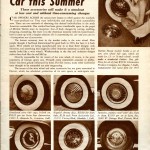 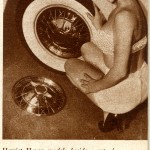 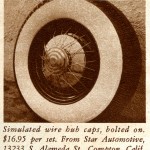 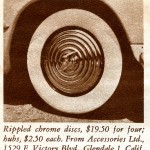 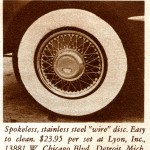 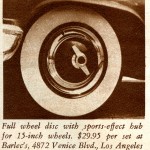 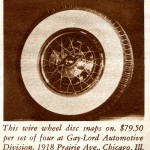 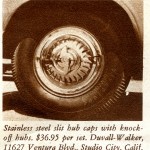 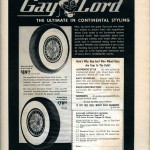 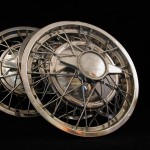 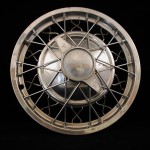 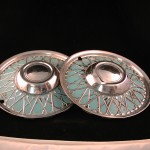 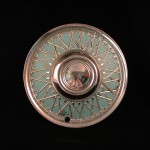 Look at Those Shiny New Shoes on that Glasspar G2 – What a Great Look for the Car. Who Will Use These First on Their Freshly Restored G2???

1953 Woodill Wildfire Shown With Hubcaps it Most Often Wears

The Victress S1A Built by Virgil Rice and Used in the Movie “Johnny Dark” Looked Great With These Hubcaps – and You Can Still Buy This Style New Today. 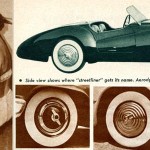