Fred Roth had all the fun.  Starting in 1974 (and earlier), he helped provide research for Michael Lamm’s article on the history of Woodill Wildfire which appeared in the March/April 1974 issue of Special Interest Autos.

By that time, Fred had already acquired and began restoration on one of the Series 1 Factory/Prototype Woodill Wildfire sports cars, and was friends with Woody Woodill and Howard Miller – the principles of the Woodill Wildfire Company.  Fred didn’t leave anything or anyone out there to find! – I thought to myself.

The Road To Finding Phil Cox:

Several years ago I collaborated on a research project with Thom Taylor – photojournalist and researcher extraordinaire (click here to learn more about Thom Taylor).  We pooled our research resources together and set out to find the last two issues of a 1941 magazine called Throttle.

Geoff Miles and Steve Coonan of The Rodder’s Journal wanted to reprint the 12 issue run of magazines that stopped in December, 1941.  Think of the date, and you’ll know why this magazine stopped publishing.

Throttle was an important magazine – the first dedicated automotive “speed” enthusiast magazine that would start the postwar run of magazines we know and love such as Speed Age, Motor Trend, Hot Rod, Road & Track, and others.

Our efforts were successful, and the needed copies of Throttle were located with the help of Greg Sharp of the NHRA Museum in Pomona, California.  And most importantly from our perspective, everyone can now join in appreciating and reading about the history in these very magazines.  Click here for a review of the book published by The Rodder’s Journal:  Throttle – 1941: The Complete Collection.

It was through this dedicated project that Thom and I became friends and he shared with me his latest project at the time – A book titled “Kustomland: The Custom Car Photography of James Potter – 1955 to 1959.”  Click here for a review of Thom’s book.

Well….I’m a big fan of Jim Potter because he wrote articles in 1952 to 1956 all about our favorite subject – fiberglass sports cars.  And his favorite car was the Woodill Wildfire.  I often thought I might strike out and try to locate Jim Potter or his family.  I had just struck paydirt – and Thom Taylor obliged.

Rick D’Louhy and I flew to California in 2013 for a week long research and “meet and greet” event (I’ll be sharing stories of this week in the future).  One of the folks we met during that visit was Jim Potter’s son – also a “Jim” – Jim North.

We spent an afternoon at Jim’s house near the coast (in fact, near Costa Mesa where Glasspar was headquartered) and during that time we reviewed the astonishing collection of “fiberglass fotography” we had come to seen – much but not all of Woodill Wildfire.

Jim was kind enough to let us borrow the archive and return with it to Tampa, Florida.  It was too massive to review in one sitting.  And…we wanted to scan the archive to preserve the wonderful images for future generations.  With Jim’s permission we’ll be sharing some of these archival “gems” in the near future.

And…it was one of these gems – a series of 35 large high res images with captions – that we reviewed and sorted into order that yielded a Woodill Wildfire story never told before.  The story of Ed and Phil Cox and the building of their two Woodill Wildfire sports cars.

This was a fascinating story laid out – step by step – for others to see and share the excitement of the build.  And…it’s been hidden for over 50 years.  Naturally I started seeing if I could find Phil Cox and within just a few steps I was on the phone talking with him.  What great excitement was at hand!  Answers to untold questions would be reviewed and Phil was ready to assist.

As an introduction to the kind of information Phil is lending to us for sharing on Forgotten Fiberglass, here’s the first Woodill Fiber Glass Body Corporation Stock Certificate (200 shares) that I’ve seen – 200 shares of the company purchased by Phil when he was a young man and an employee of Woodill Corporation: 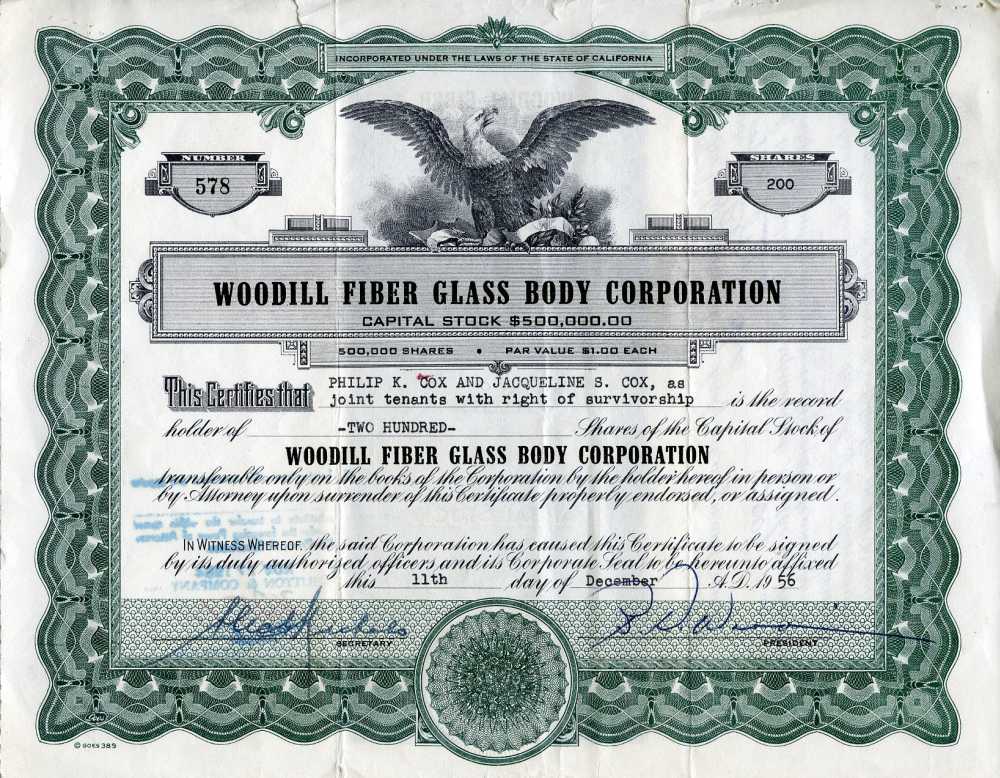 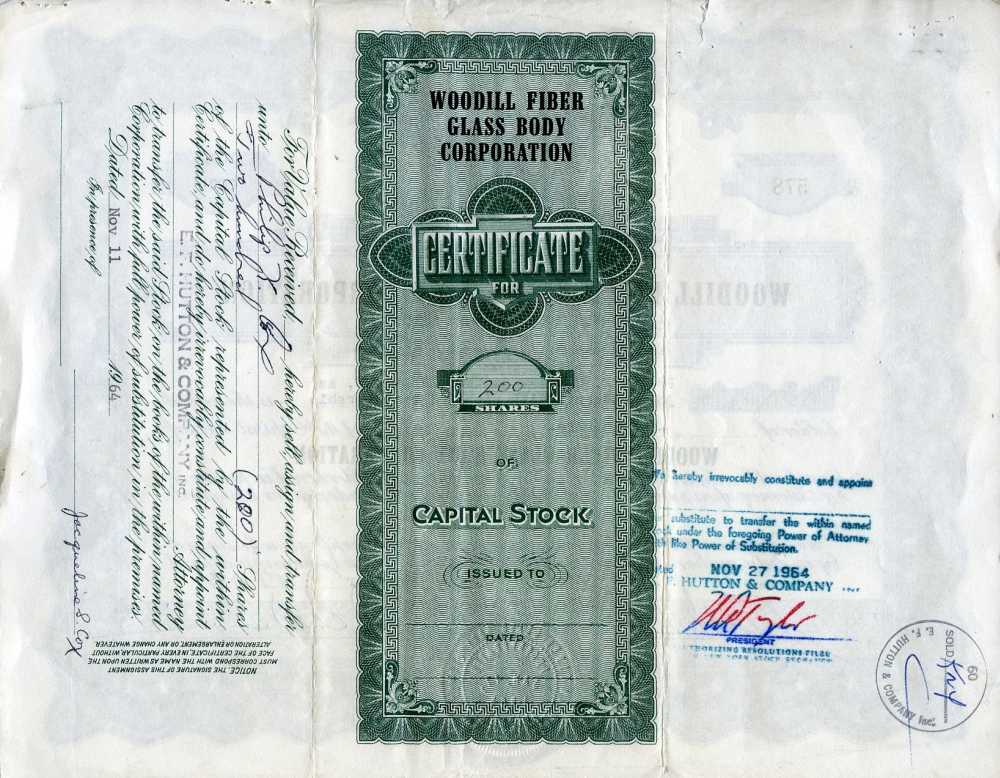 Phil was an employee who worked closely with Howard Miller – production foreman of the Woodill Corporation – he worked directly for Woody Woodill too.  Phil kept detailed records and started working for Woody in June, 1956 and left the company when (as he recalls) it was going out of business in February, 1957.  Roughly a 9 month employment.

Wait until you learn what new information and insight Phil Cox has of Woodill Wildfires and his time at the company.  Photos, stories, and even film – test driving a chassis with Howard Miller himself.  All to be shared soon here at Forgotten Fiberglass.

And…as a way of whetting your appetite for the first story we’ll share about Phil, here is the lead photo and caption of the Jim Potter photo story about building your own Woodill Wildfire that we’ll soon share: 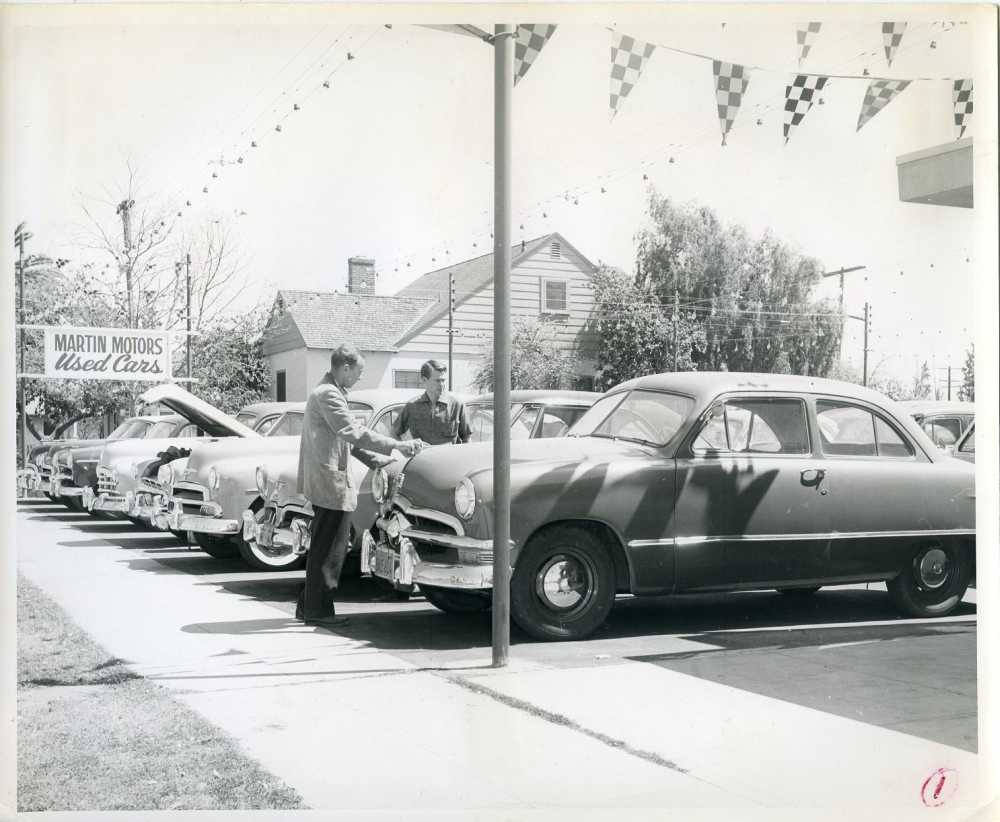 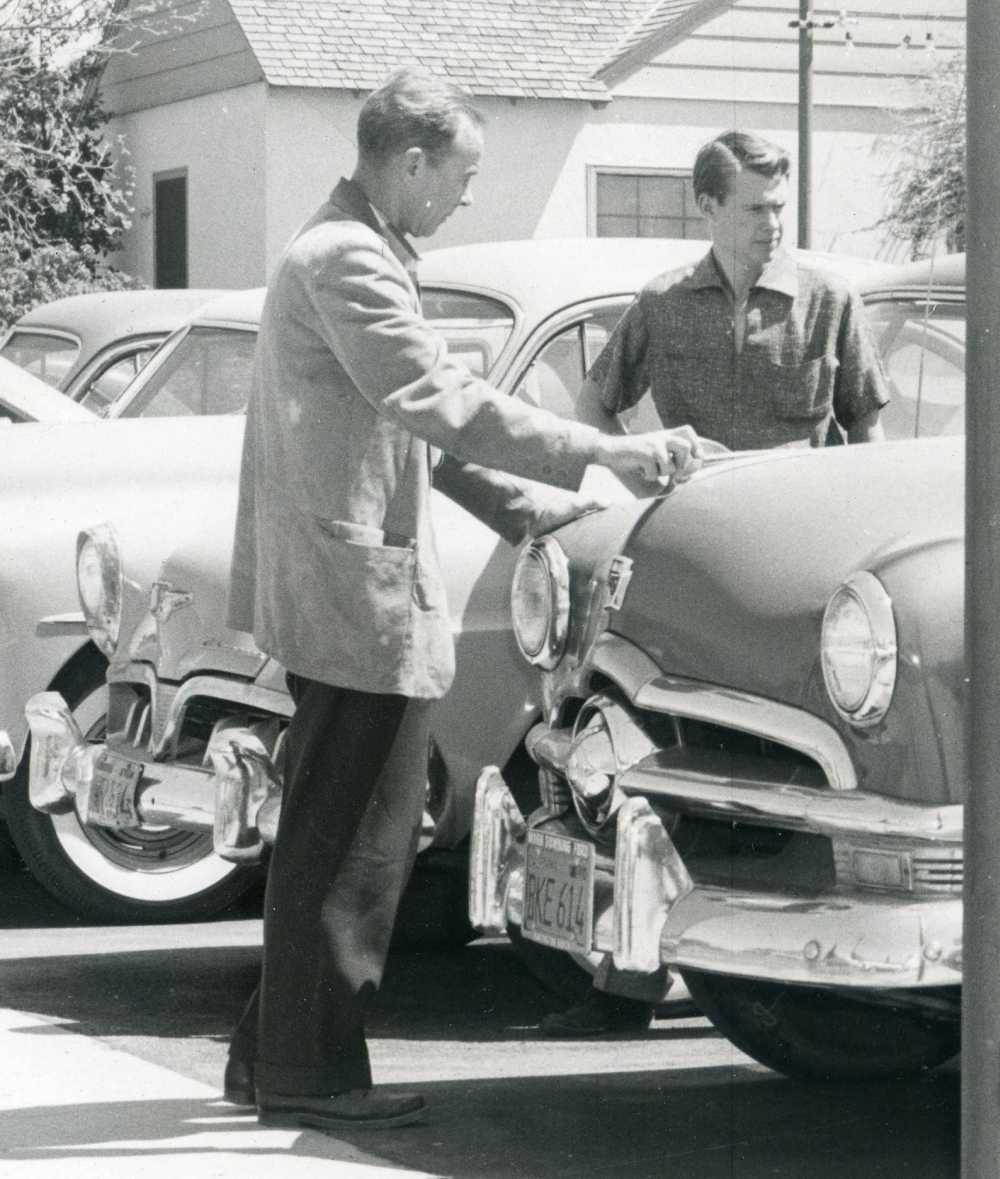 Great thanks to so many people listed in this story that made the finding of Phil Cox possible.  And just this week, Phil Cox and Fred Roth were introduced to each other via phone, and I’m sure a new friendship formed.

I’m also pleased that it looks like Phil and his wife Linda will be joining us for the debut of another Wildfire – one built in the 50s and still owned by good friend Dick Foster – at the Amelia Island Concours d’Elegance in March, 2015 (click here to learn more about this event).