The 1930s were a rebuilding time – a time of renewal as people started to work their way out of the depression, and the design styles during this time were fascinating studies of contrast.  Design in all things during this time showed extremes.  None more different than the the extravagance of the Art Deco contrasting with the streamlined movement.  And these differences revealed themselves in architecture, homes, furniture, cars and more.

An American car that combined both of these styles was the Sharknose Graham of the late 1930s – streamlined yet opulent.  Shown below is a Sharknose taken to a further extreme in design by the French coachbuilders Saotchik.  A beautiful car. 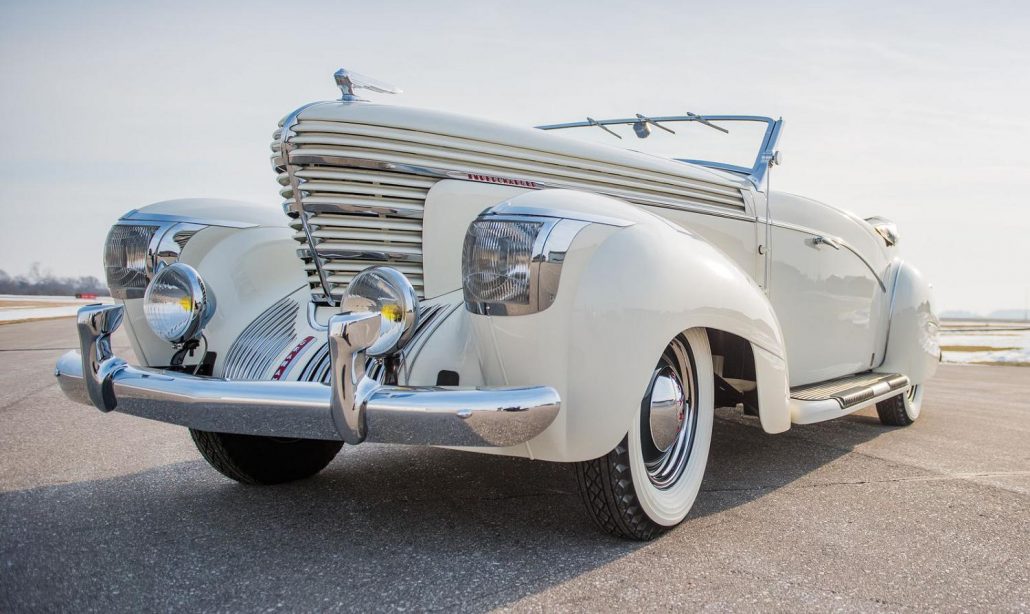 We often think of the 1938 Buick Y Job as the industry’s first concept car – and that’s correct as long as you think large.  It was designed and built by General Motors which was one of the heavyweights in Detroit.  But concept cars in America predate the Buick Y job by a decade or even more.  And they started in a big way with the teardrop streamliners.

One of the most famous designers who used streamlining in his automobile designs was Paul Jaray.  Born in 1889, Jaray witnessed the birth of the aircraft and the lighter-than-air dirigible too.  He is credited with redesigning German’s Zeppelins and influencing streamlined design in a number of cars of the 1930s.

But other designers were known for the teardrop designs too.  Buckminster Fuller, Norman Bel Geddes, Frank Spring and even a young Strother MacMinn.  Present and future heavyweights of design and engineering would reveal their teardrop concepts and sometimes these concepts would be brought to reality – a very exciting time.

The streamlined teardrop car became a shape that several coachbuilders and talented individuals decided to emulate based on the period understanding of aerodynamics.  And while not a national phenomenon, it’s estimated that less than 100 of these types of vehicles were built in America from the late 1920s thru the early 1950s.  Other streamliners were built in Europe but in small number as well.  And nearly each one was uniquely designed and built by an individual or small coachbuilder. 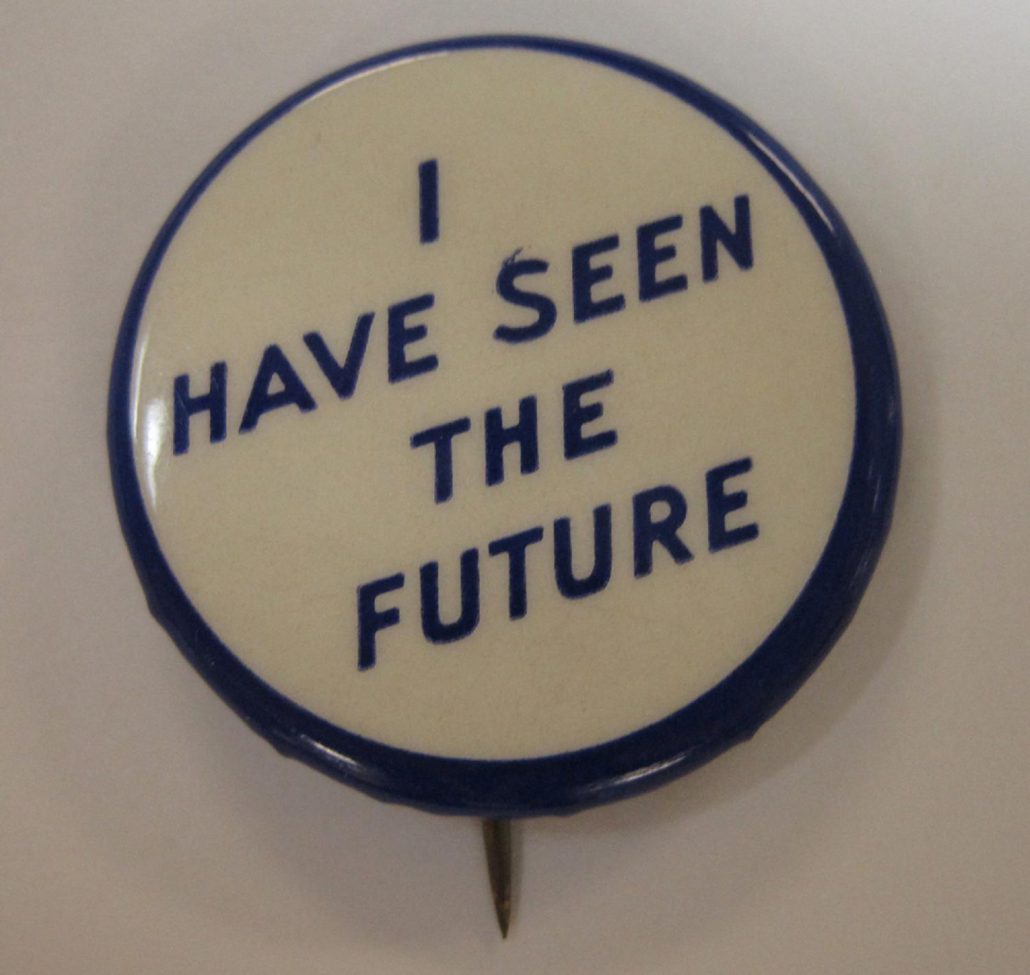 The teardrop shape and concept persisted and always drew attention in magazines, automobile shows and on the road wherever they would go.  It was the “future car” of its era.  One of these teardrop streamliners was the Gougeon Streamliner built in 1937 by Ronald Gougeon of Bay City, Michigan.  Friends shared that he was influenced by the cover of the Motor Annual Magazine in 1935 shown below.  He kept a copy of the front cover of the magazine on the wall of his garage as he built his aluminum skinned streamliner translating the two-dimensional shape to a three-dimensional work of art. 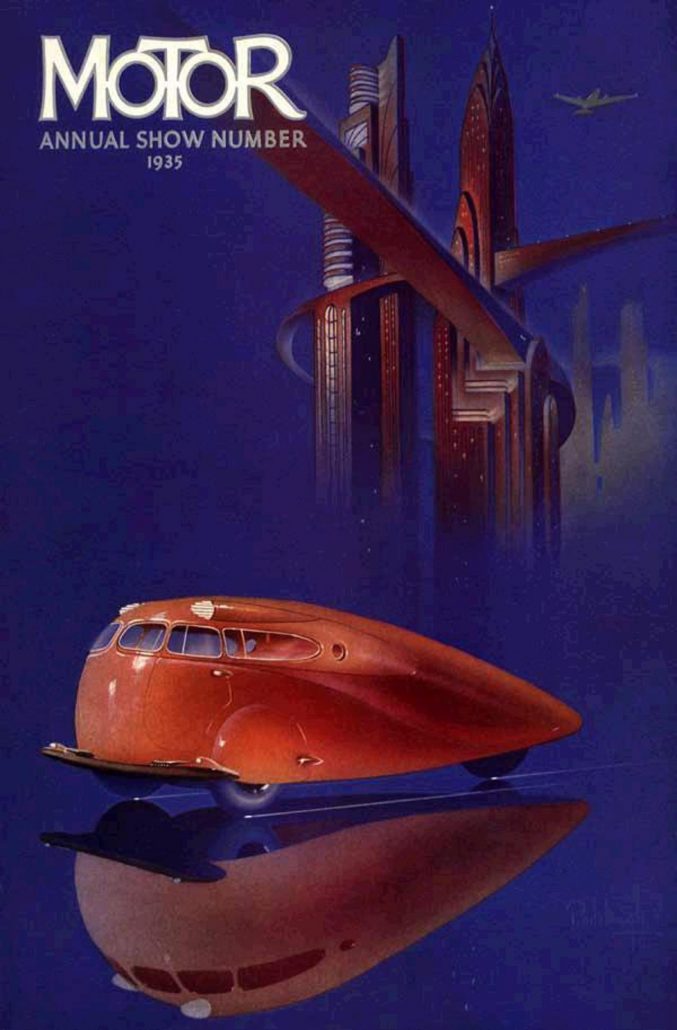 Few teardrop streamliners may have been built, but this didn’t keep magazines from showing the possibility of these cars on the streets across America.  Check out some of the inspiring magazine covers below. 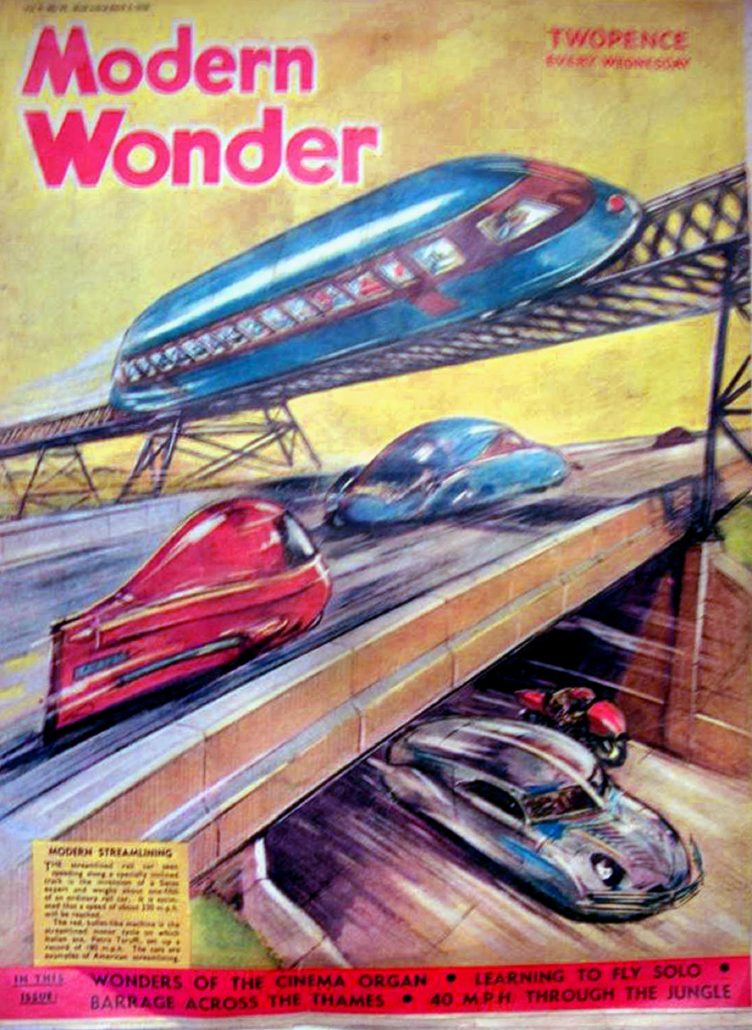 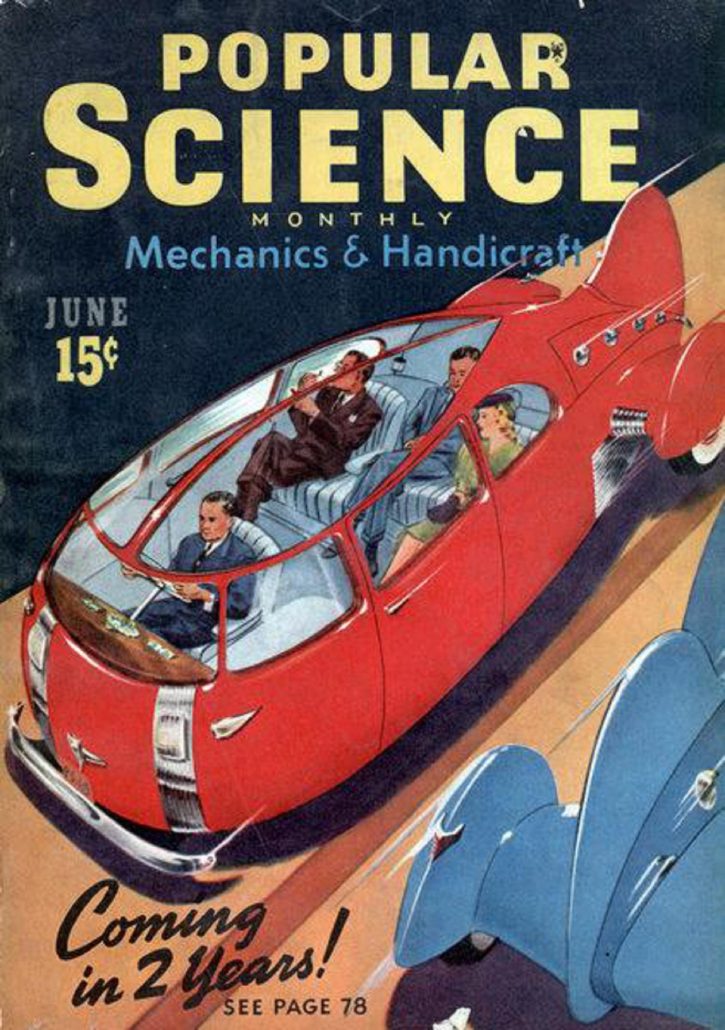 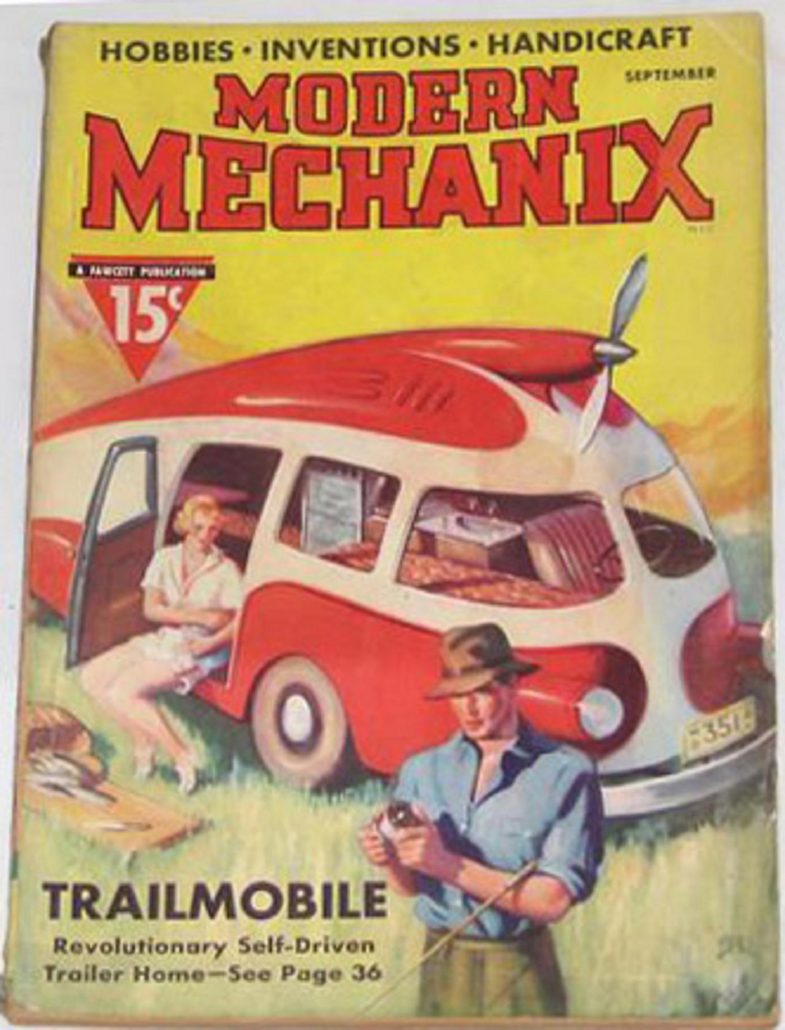 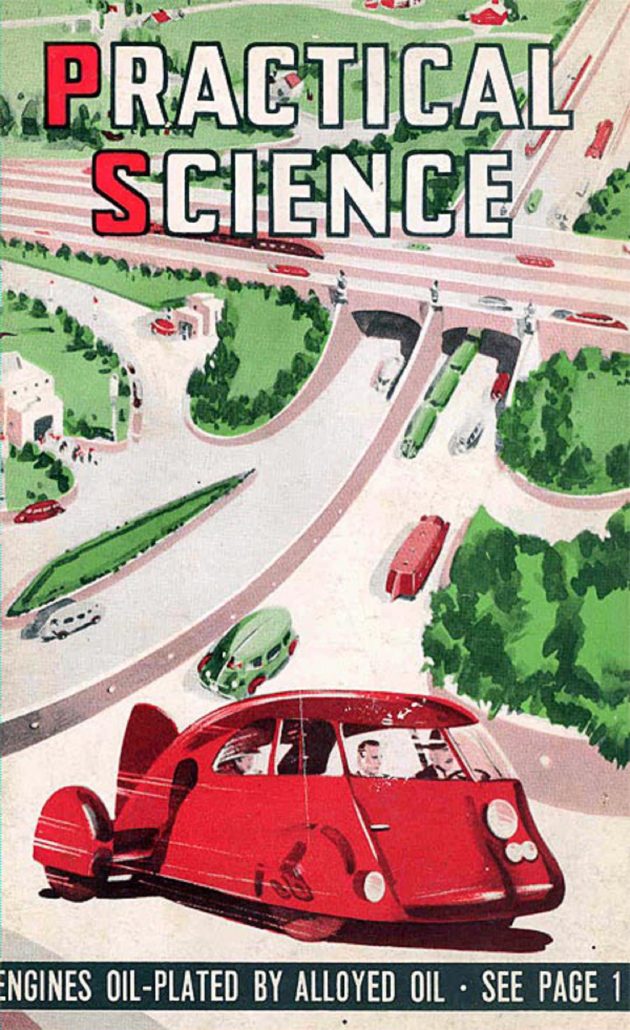 According to the Gougeon family, Ronald Gougeon started building his streamliner in 1935, and within short order had a running, driving automobile.  Family and friends remember a red leather interior – leather having been acquired directly from (somehow) the Packard automobile plant.

Ronald used and modified a 1934 Ford chassis with a wheelbase (unaltered) of 112 inches.  Given that the driver and passenger sit in front of the front axel in a cantilevered position (where the engine would normally be, the streamliner is actually quite large and can easily seat four people.  Gougeon also lengthened the front of the chassis by two the three feet as well.

We’ll explore more of the details of Gougeon’s work on the streamliner in future stories.  For now let’s learn a bit more about Ronald Gougeon. 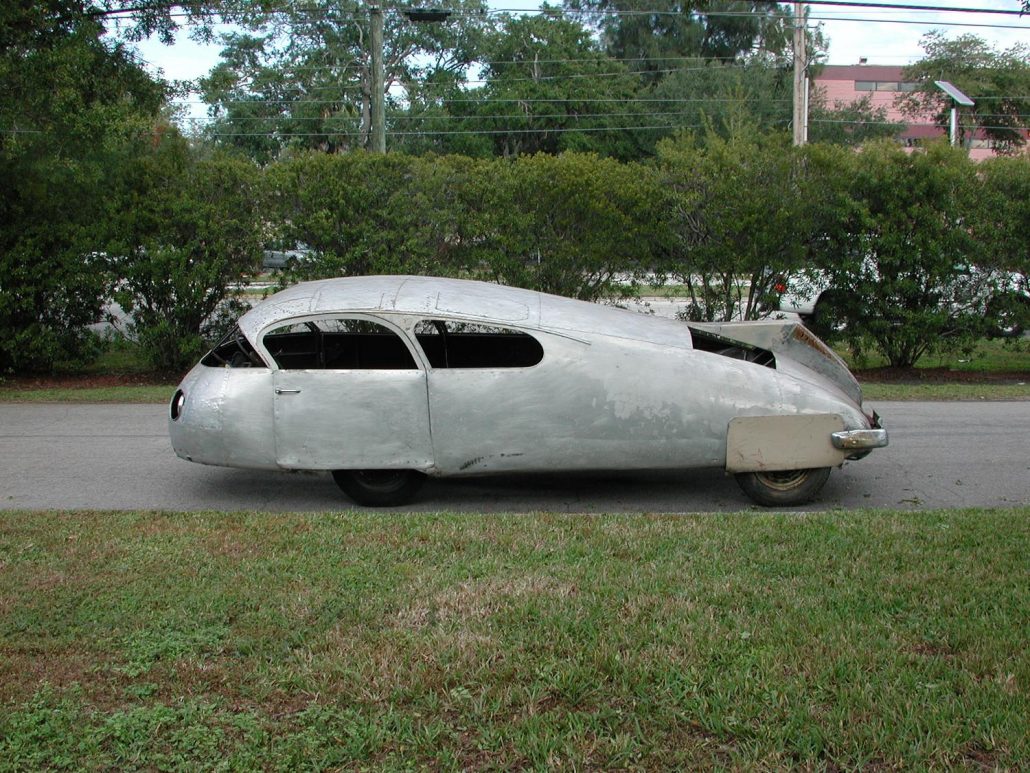 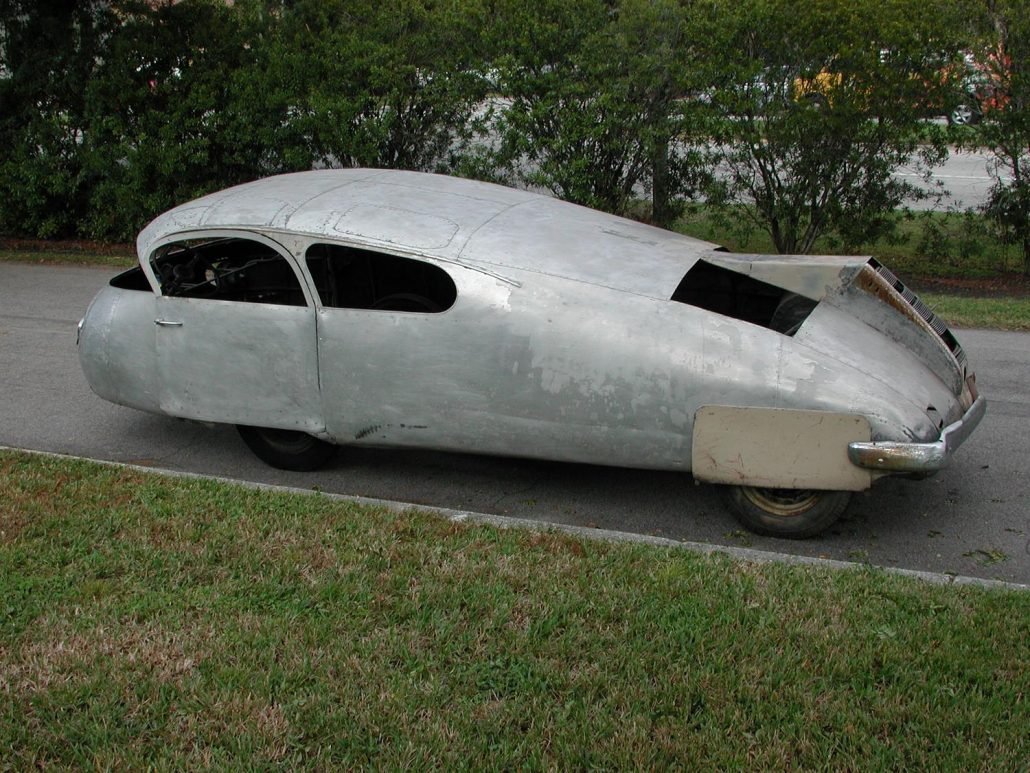 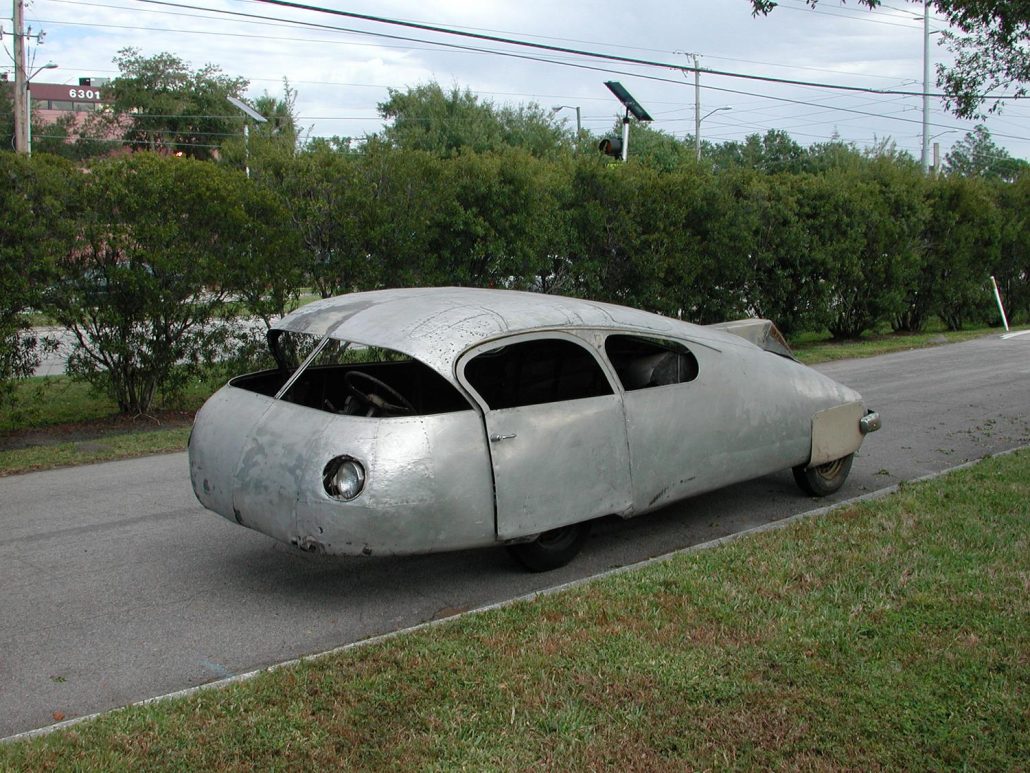 Here are two shots of the inside as we began to restore this streamliner: 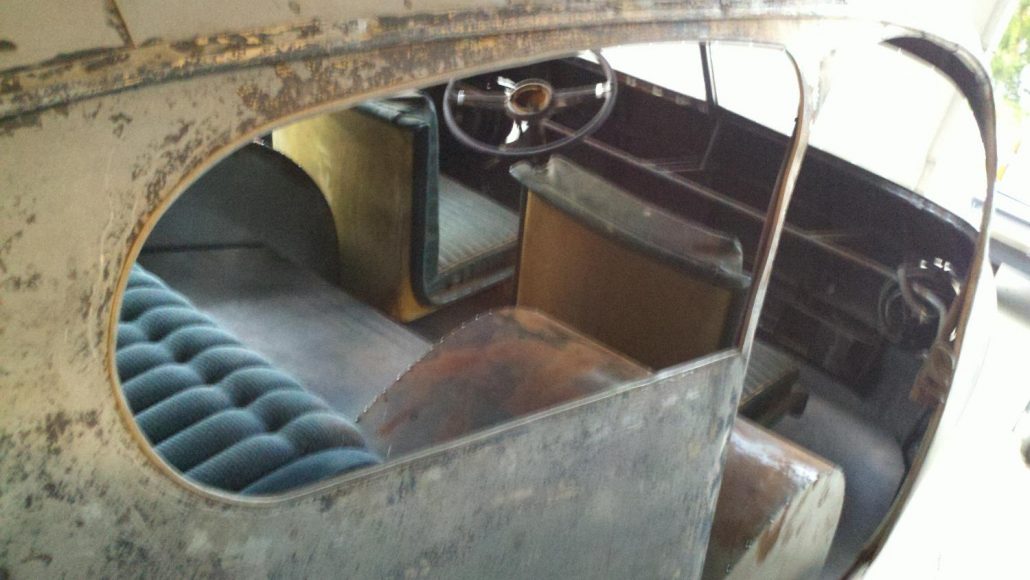 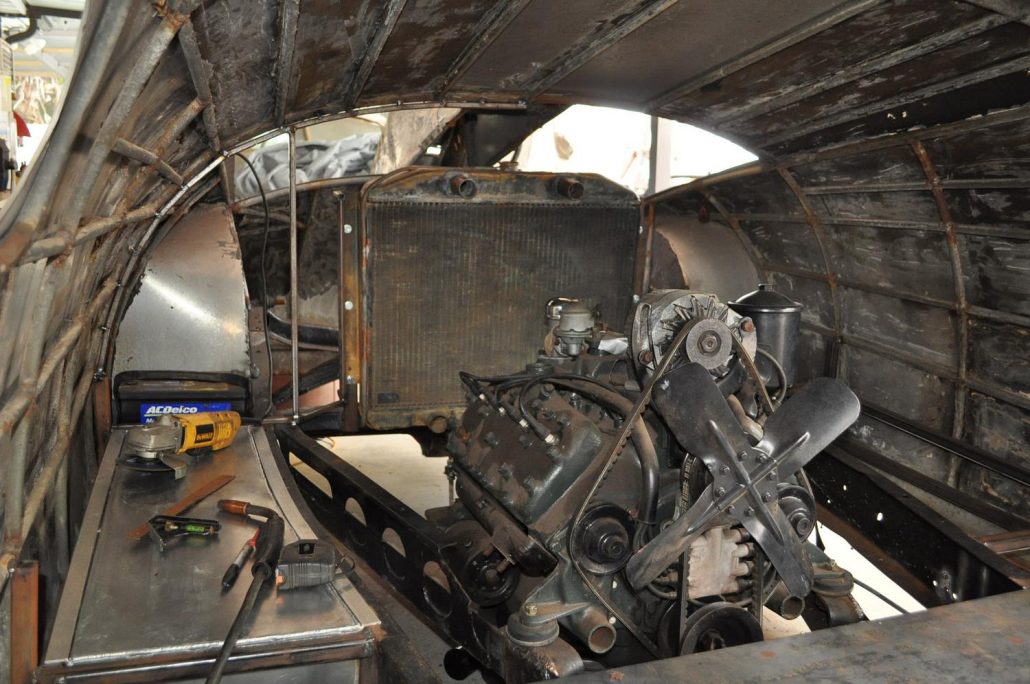 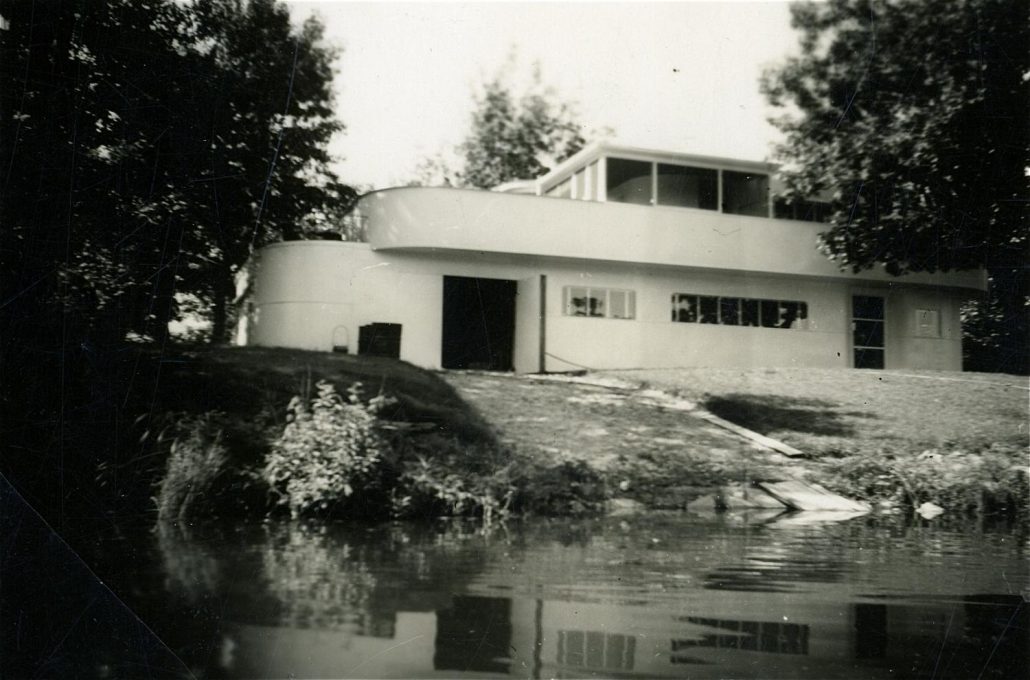 In the 1930s, Ronnny developed and operated a small chain of beauty parlors and became wealthy doing so. It surprised no one when during the same time he told people he was going to design and build his own car.   And he did.  He finished the car in the 1930s but as with most designers that keep their own work, he continued to work on it over the years of his life.  One of the last modifications he wanted to make was updating the rear end to Corvair – but time did not allow this change to take place.

Sadly Ronald Gougeon passed away at age 53 in 1963.  We’ll share more about Ronny and his background in future stories on his Gougeon Streamliner. 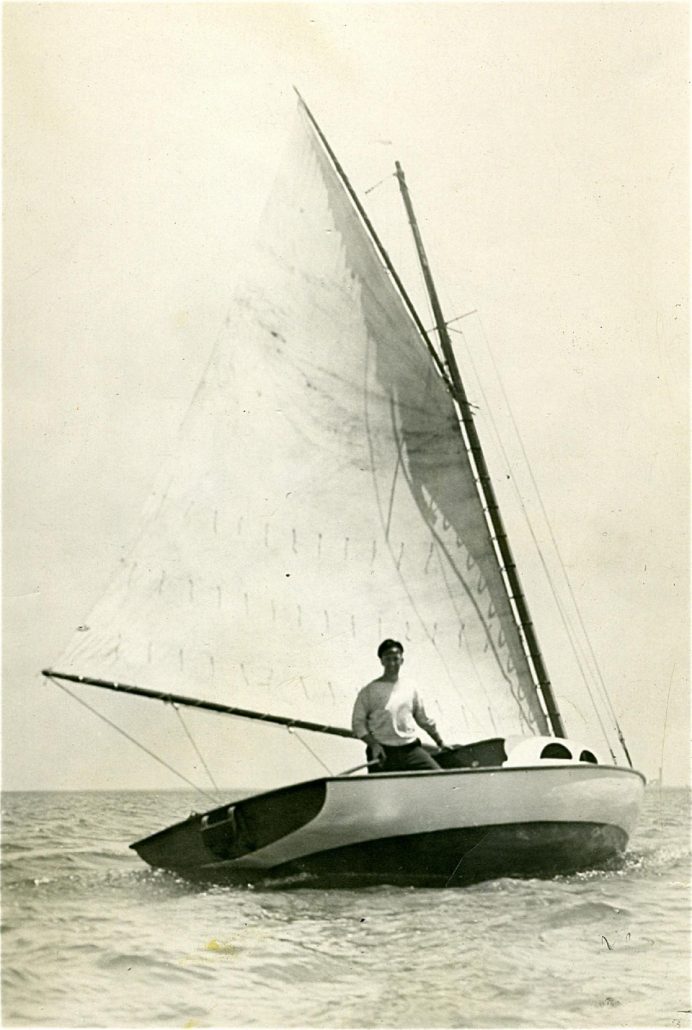 Ronnie Gougeon on a boat he designed and built.

The extended Gougeon family reached out to help me with history when I acquired the streamliner – especially Meade Gougeon.  Meade shared stories and histories and photos and more – all that we’ll share in future stories.  They also helped me get in touch with others who knew him well.

My Favorite Story – From Joy Cote

One of the many stories I heard during my research on the Gougeon was from Joy Cote – a neighbor of Ronny’s in the 1940s.  She and her future husband Jack Cote would watch as Ronald would build, test and change the streamliner to make it look and perform the way he wanted.  They had been married for 61 years when I talked to them some time ago – and dated for several years before they got married.  They both had known Ronny and his streamliner.  During one conversation, Joy shared,

“Early one Fall in 1946 I was starting college and much to my surprise Ronald asked me if I needed a ride to college – it was about 40 miles away.  Since he was a family friend I said yes and he went to get his car and pulled up in his streamliner – much to my surprise.

Ronny had been working on it and removed the front floor but said I would be safe if I put my books and cases down and kept my feet firmly on the rails – which I did.  He tore out of their and raced his way all the way to my college.  I was never so scared in my life – and never forgot a moment of the drive or how people looked when we pulled up in his streamliner.”

Why My Interest in Teardrop Streamliners?

I was born in 1962 but always interested in teardrop streamliners – and here’s why.  My parents were both graduate students working on their doctorate at Southern Illinois University in Carbondale, Illinois.  Buckminster Fuller or “Bucky” as the students called him was a professor there and my mother took classes from him. 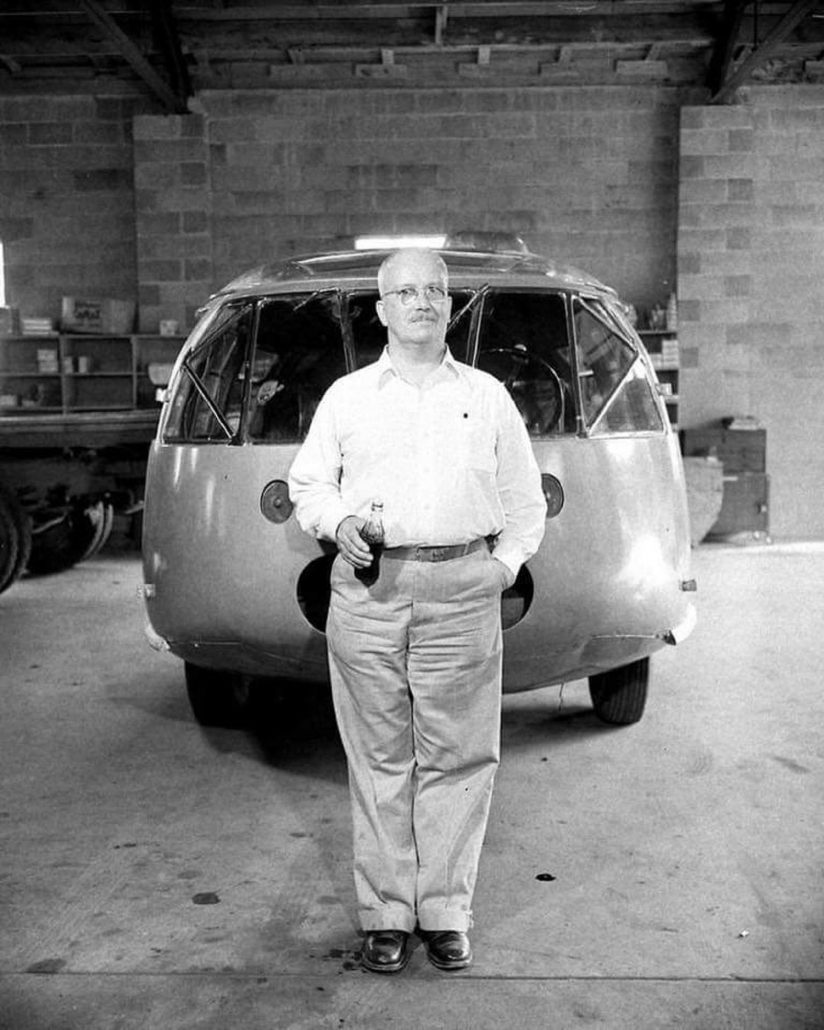 Bucky Fuller in front of his Dymaxion Streamliner

She would talk to me at a young age about some of the things they were doing with “Bucky” and one of those was helping him build one or more geodescic domes near the campus.  I was very young but loved cars and she would tell me about his teardrop car called a Dymaxion and the car he drove which was a Citroen with that hydraulic suspension which would lift up or drop.  Cool stuff for a young kid to hear.

By the time I was a teenager we were living near Chicago and my mother’s experience with Bucky would come up in conversation from time to time.  And during that time in the 70s we actually had a chance to visit a surviving Dymaxion at the Science and Industry Museum in Chicago, Illinois.

So I was hooked.  Stories of the teardrop cars when I was growing up.  Visiting one in a museum.  I just never thought I would find and own a teardrop car like the Gougeon.  Be careful what you wish for gang.

So this article kicks off the “Streamlined Dreams” section of our website that I will be developing over the next several years.  This part of the website will focus on streamlining, teardrop cars and more.  I’ll also share more history on the Gougeon Streamliner and other teardrop cars of the era too.  And maybe I’ll share the story how I found and now own a second teardrop streamliner.  Yes I have a strange talent for finding strange cars.  Who would have guessed. 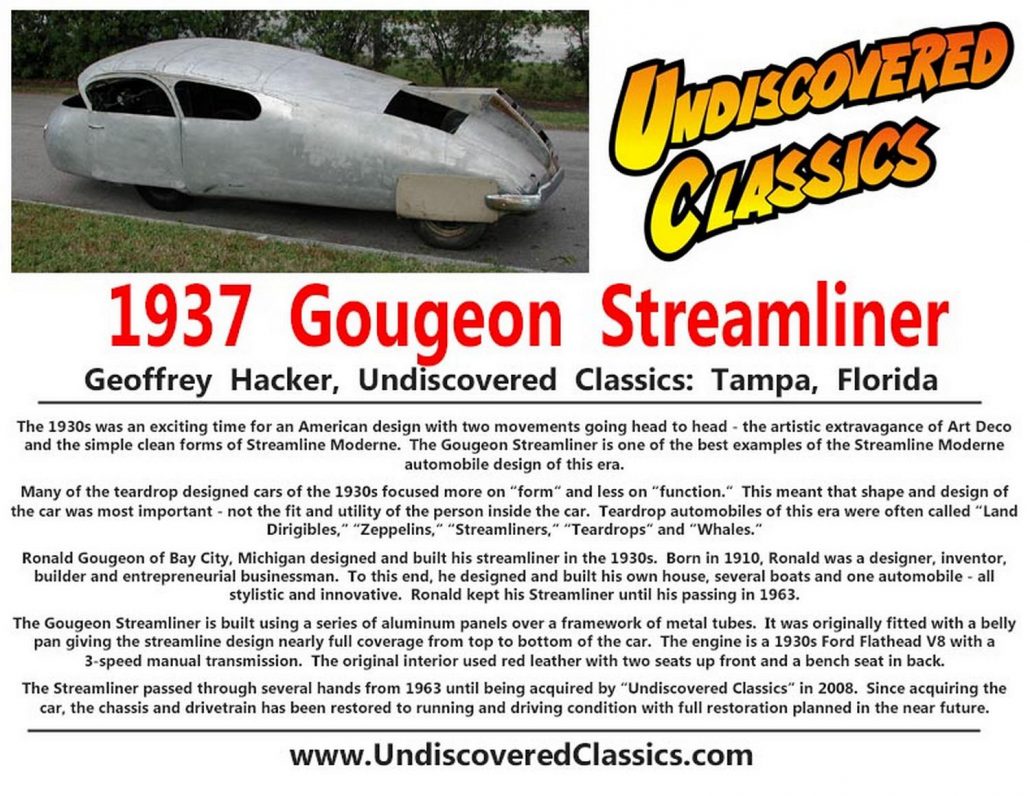