Concept cars were not all built by and for the Big Three in Detroit.

Small shops and creative and talented individuals built concept cars as far back as the 20s and they are still building them today.  But when “concept cars” are brought up in an article or conversation we tend to think “GM Motorama” or other show cars/concept cars of the big  manufacturers.  It just wasn’t so.

Let’s break out of that mold and start considering some of the concept cars that were built in the postwar era by individuals and coachbuilders that were celebrated back in the day and represent some of the finest and most imaginative work of the era – like the 1953 Manta Ray.

And to kick this off, let’s look at one of the best articles on this car – an article written by Dean Moon of “Mooneyes” himself.

We tend to think of Dean as the owner of the famous speed shop from Santa Fe Springs, California – only.  And it’s true that he owned this and built it into a powerhouse.  What’s also true is that Dean was an author and a photographer, and he captured some terrific stories and photos from this era as no one else did.  This is one of my favorite story that he penned – and one of my favorite cars too.

So…off we go and let’s see what Dean Moon had to say about this special concept car from 1953. 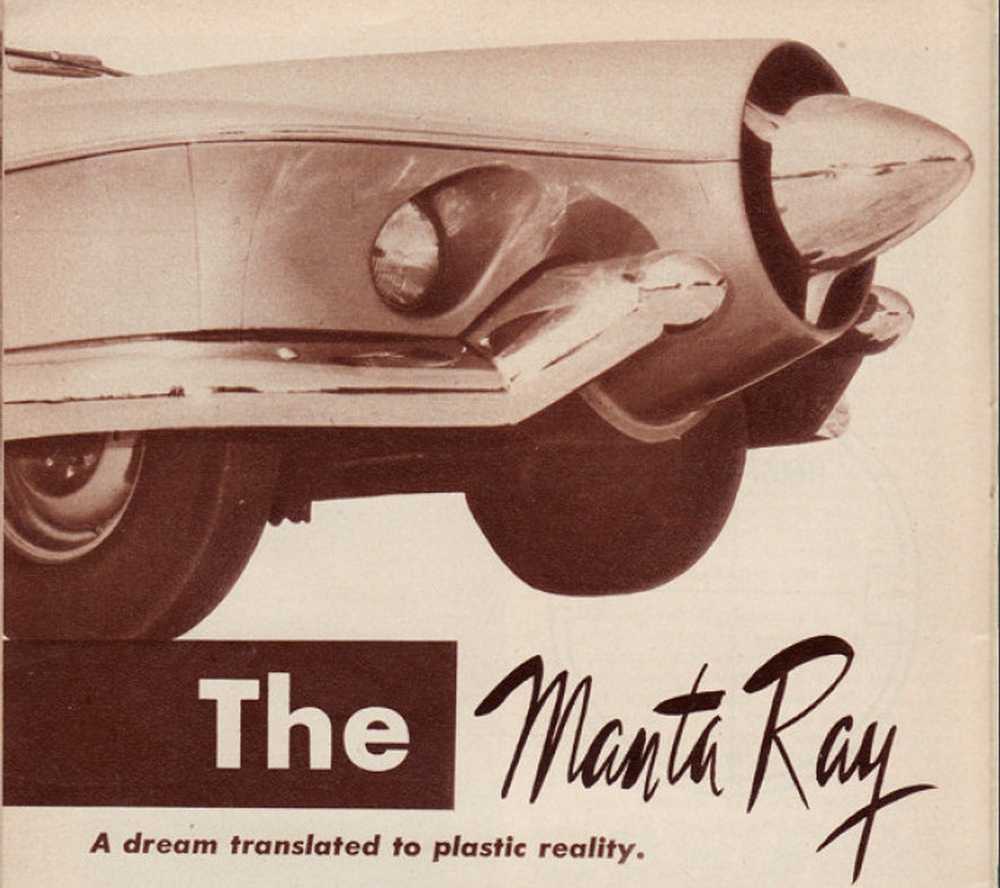 Beautifully expressed in fiberglass are the ideas and imagination of Glenn Hire and Vernon Antoine in their exceptional example of automobile styling and building.  Wanting to incorporate the swift flowing lines of a jet fighter plane into a car’s styling, they converted their Whittier, California garage into a workshop and set themselves to their task.

Both Antoine and Hire are employed by North American Aviation Company in the engineering and designing departments of the guided missile and jet aircraft divisions so they were well qualified to transfer their drawings and sketches into reality.  A year later, and with 4000 hours of hard, spare-time work under their belts, the men rolled the Manta Ray – as it is appropriately named – out of the shop. 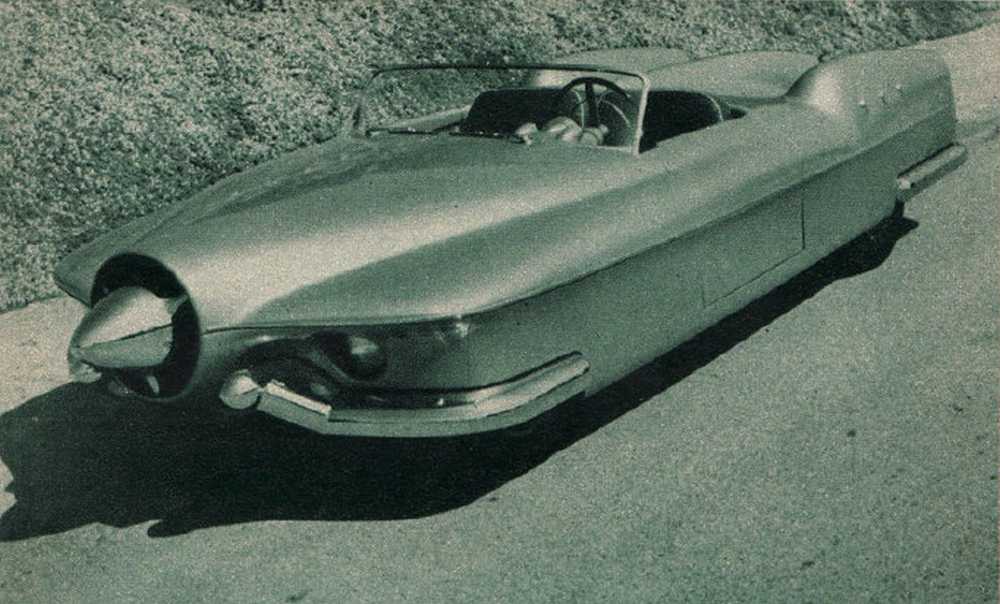 Being more interested in appearance than in actual performance, the engine and chassis departments were left strictly alone except for the 3” shortening of the frame side rails.  The chassis and power plant assemblies are 1951 Studebaker, chosen for the simplicity of structure and the light-weight characteristics.

Even with the thoughts and determination of the two experienced men all did not go as well with the body as might be expected.  Many seemingly insurmountable problems had to be overcome as the work progressed.  Problems like the determining of the number of body mounting brackets, their design and installation. 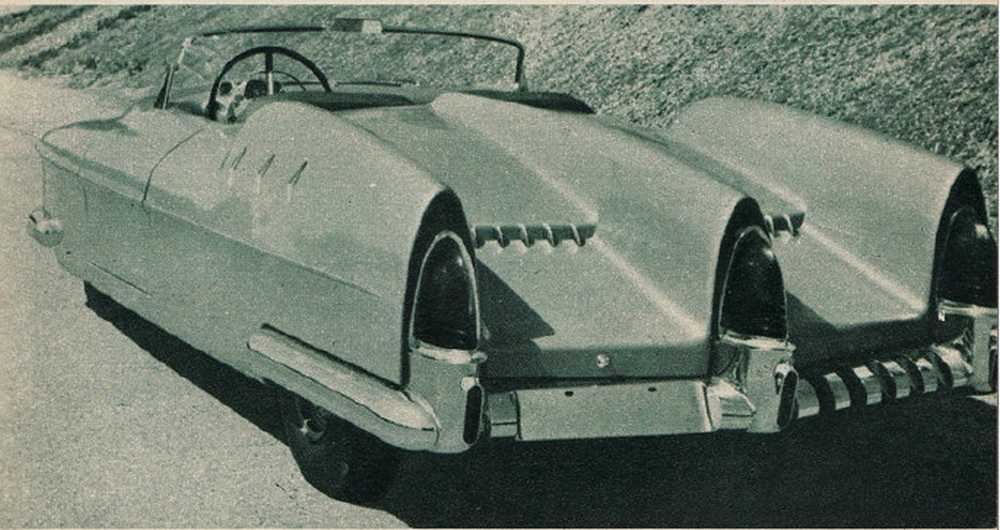 Body contours had to be kept within certain limitations so the shell could be removed from the mold.  The final design had to be decided upon, the location of the inner panels determined and the finished layout of the instrument panel designed for once the molds were completed little change could be made without a terrific amount of rework.

Nevertheless, the dream became an actuality and the builders say that the job turned out even better than they had planned.  At a recent automobile show held in Los Angeles, Glenn and Vernon received a special trophy, as well as a cash award, from a local newspaper for “Outstanding Creativeness and Engineering.”  Upon completion of the show Bob Yeakel, a leading Los Angeles auto dealer, became so enthused after seeing the car, and later driving it, that he purchased it from the owner-builder team.

Interest didn’t cease there, however, for Bob Yeakel has given the go-ahead to Glenn Vernon on the production of the same car for a select clientele.  (Editor Note: Bob Yeakel is no newcomer to the pages of Rod & Custom.  It was he, you will remember, who helped to build and who drove the first jet car.  See Rod & Custom for June, 1953.)

The new version of the car will differ mainly in the engine and chassis.  The frame itself will be constructed of tubular steel for extra strength and rigidity, and the power will be supplied by a Cadillac engine, with Hydramatic transmission, unless the purchaser demands otherwise. 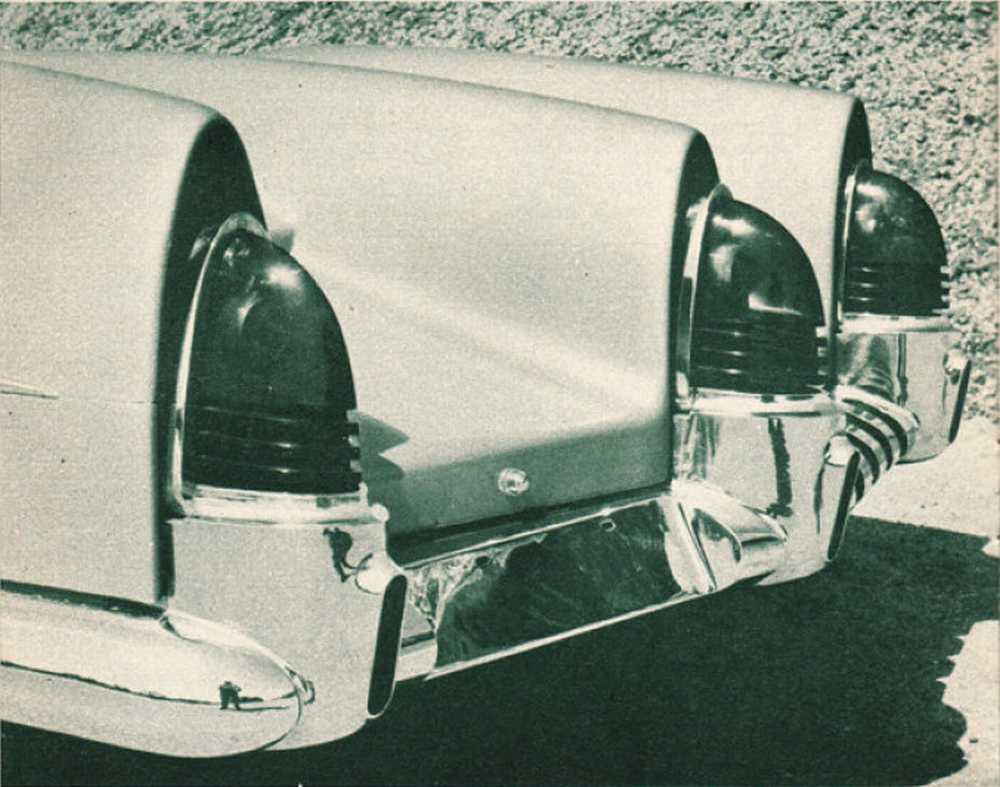 There is even some discussion of whether to include a supercharger but this will probably be classified as optional equipment.  The seating capacity will be increased from three to four persons, however, the single seat design will be retained.

As for the body of the present car itself, it is a masterpiece of quality workmanship and one has to see it to truly appreciate it.  A common detriment to plastic bodied cars is the waves and ripples that immediately mark it as being made of material other than metal.  Not so with the Manta Ray. 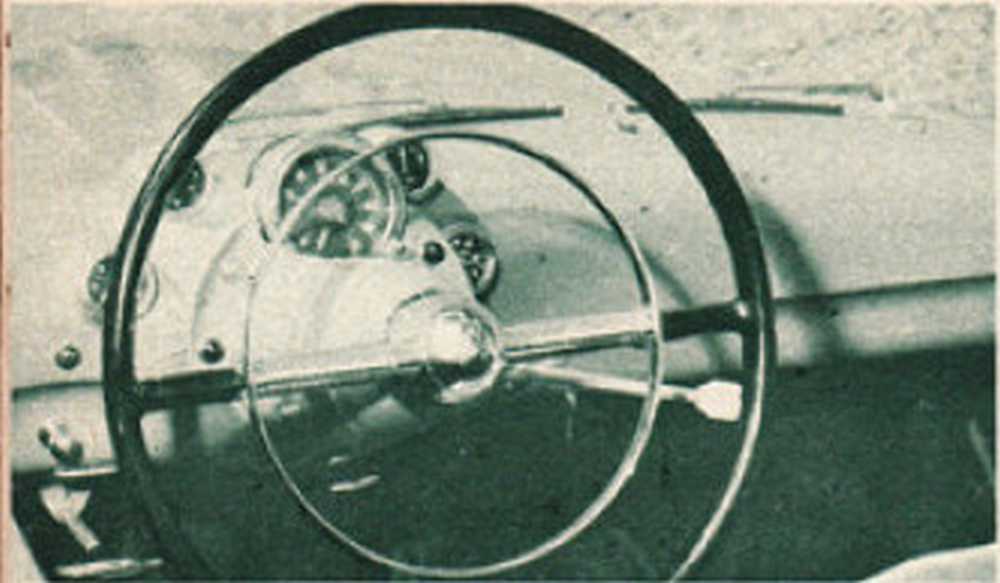 The mirror-like finish, with no wrinkles or other imperfections, was achieved only after countless hours of sanding, priming, more sanding and so on.  All the seams, creases and contours are exactly as intended; either straight as a die or smoothly curved, whichever the case may be.

Many sharp-eyed enthusiasts will immediately not its resemblance to General Motors LeSabre.  True, LeSabre prompted the general appearance of the Manta Ray but the relationship is only superficial.  The nose piece was first pattered in wood then a 1/4 “ thick casting was made which was chrome plated.

The taillights – all three of them – are immediately recognizable as being from a Lincoln, which is exactly what they are.  The fact that the taillights do not “fit” in the openings provided in the body was done purposely – to match the type of styling used on fast jet planes.

The three ports in the rear bumper were intended to provide outlets for the exhaust but it was decided that the corrosive effect of the gases would mar the bumpers chrome.  Therefore, the exhaust was re-routed beneath the car in the traditional manner.

Upon completion, the car was painted a metallic golden shade of lacquer which suits the car perfectly.  Needless to say, the car attracts a great amount of attention whenever it is driven around town – and well it should.  This is a one-of-a-kind car down to even the tiniest of details.

And the good news gang is that the car survives.  This was first reported by good friend Sondre Kvipt of the Kustomrama website.   The owners of the Manta Ray have had it in their family for nearly 50 years or more, and are they are also part of the Forgotten Fiberglass aficionados.  You’ll meet them and their car soon.

So were others built?  If so, where are they?  And why did the car disappear for so many years?  Answers to these questions and more will be revealed in future stories here at Forgotten  Fiberglass.