Any successful business needs a successful promoter – and Woody Woodill was just that – par excellence – for American sports cars in the early to mid 1950s.  When Woody’s plan in 1952 of making his car the new Willys sports car didn’t materialize (Kaiser bought Willys and went forward with their plan for the sporty Kaiser Darrin), he put his head down and pushed forward.

And by the summer of 1953, he was back in the game with a new model that we call informally the “Series 2” (a name coined by friend and historian Glenn Brummer) – an entirely new design by Woodill and built by Bill Tritt and Glasspar.  Woody offered these cars fully built and in “assemble it yourself” form.  Depending on the parts purchased and the skill of the new enthusiastic owner, it could take 3 months or more than a year to finish.

Not a project for someone anything less than fully engaged in the process from soup to nuts.

Woodill released his brochure for this new car in late 1953/early 1954.  Let’s check out his marketing approach on this new four-page brochure. 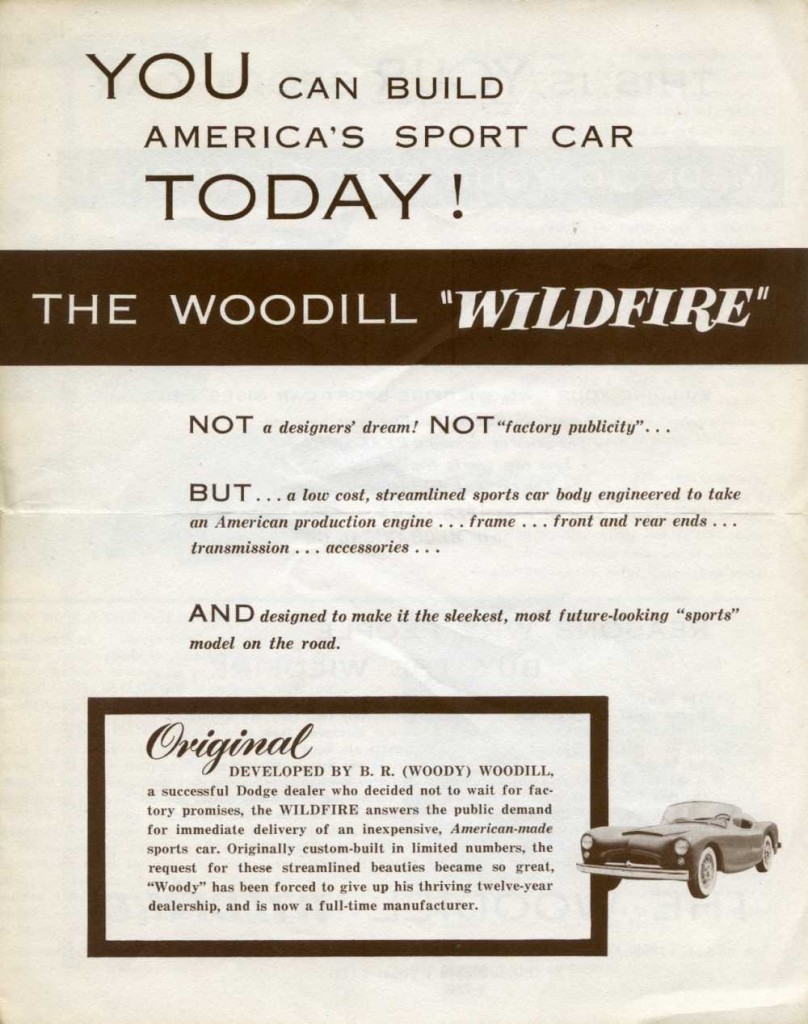 Comments on Page 1: Woody did a great job at focusing on the key selling points on page 1 and did a nice summary at the bottom of the page discussing the history of the car as follows:

“Developed by B.R. (Woody) Woodill, a successful Dodge dealer who decided not to wait for factory promises, the Wildfire answers the public demand for immediate delivery of an inexpensive, American-made sports car.  Originally custom-built in limited numbers, the request for these streamlined beauties became so great, “Woody” has been forced to give up his thriving twelve-year dealership, and is now a full-time manufacturer.” 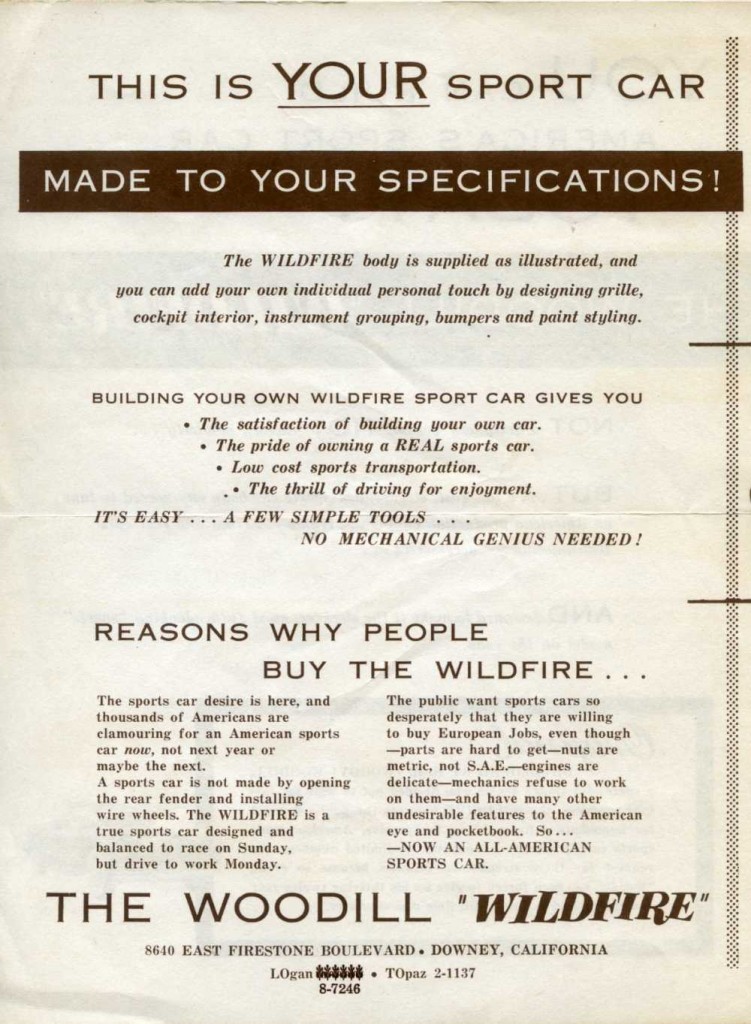 Comments on Page 2: I love how Woody encouraged people to customize the car to their own taste.  Right up front he says, “The Wildfire body is supplied as illustrated, and you can add your own individual personal touch by designing grille, cockpit interior, instrument grouping, bumpers and paint styling.”

And he nicely outlined the reasons why – he thought – people should buy the Wildfire.  Check out some of his comments above which include, “The Wildfire is a true sports car designed and balanced to race on Sunday, but drive to work on Monday.”

That did happen with cars in the early postwar racing years gang – but not too much after 1955.  The Woodill was certainly well-positioned for this kind of fun 🙂 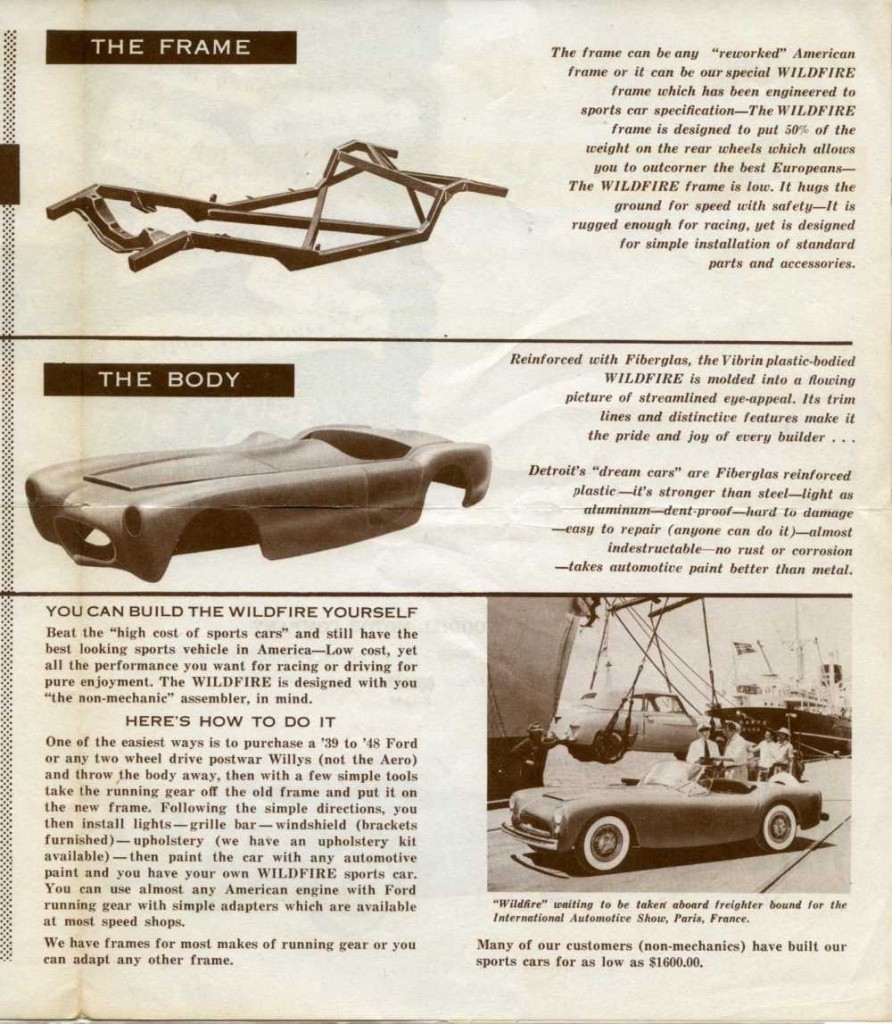 Comments on Page 3: The frame shown is the true Wildfire frame which was based on a modified Mameco frame that was designed by Bill Tritt of Glasspar and Ted Mangels and Ed Martindale of Mamceo.  And Woody was right when he said “Detroit’s dream cars are fiberglass reinforced plastic.”   Nearly 40 concept cars from Detroit were built out of fiberglass from 1953 to 1956.  (More about this fact in a future story.) 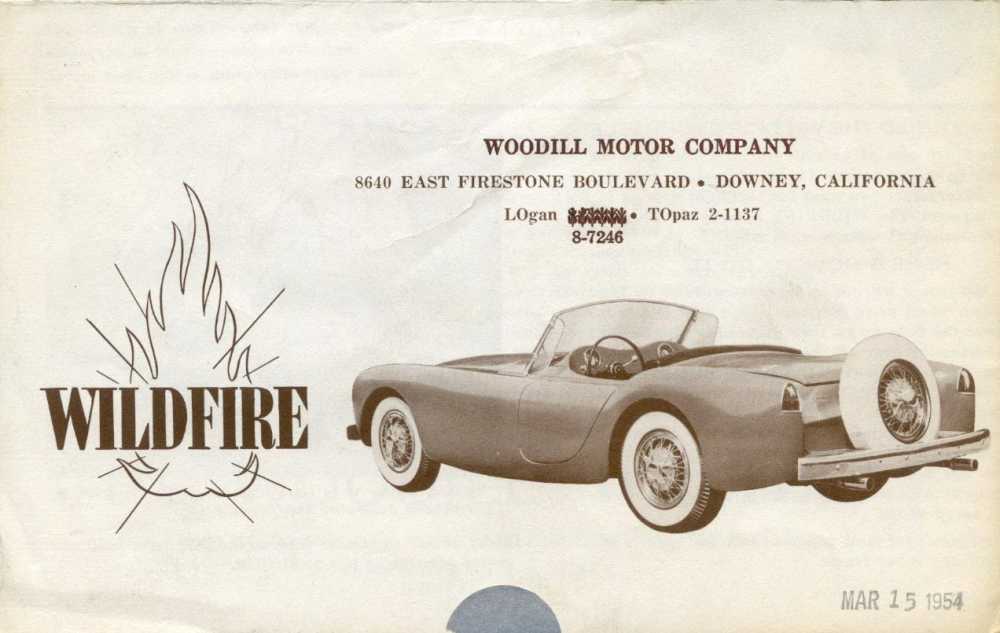 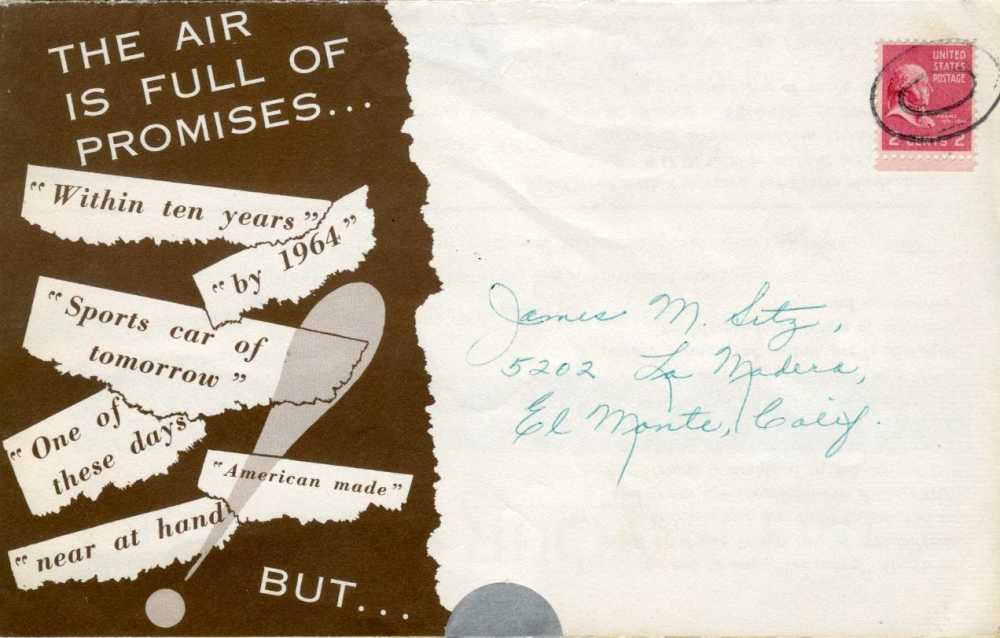 Comments on Page 4:  Note to Jim Sitz  – friend of fiberglass.  Jim….do you recognize your address above?  🙂  Have no fear fiber-gang, Jim and his wife moved to a place in the northeast, so this address doesn’t break confidential in our new century *wink*  But now we know where he lived so many years ago.

Woodill Wildfires are being restored and brought to some of the best shows in the world including the Pebble Beach Concours d’Elegance.  In fact, we hope to see another Wildfire appear at the upcoming Amelia Island Concours d’Elegance in 2015 – more about that show in a future story here at Forgotten Fiberglass.