While we may think that Glasspars, Wildfires and Victresses (the big 3 of handcrafted cars in the early to mid 50s) are plentiful given the number of stories we share here at Undiscovered Classics – nothing could be further from the truth.

I’ve written about this Buick Wildfire here twice before.  Most recently last year when I helped the owners establish the provenance of this very car.  Click on the links below to review the detail in each of these stories:

So you ready?  Let’s take a look at what Hyman has to say about this Wildfire for sale.  And away we go…. 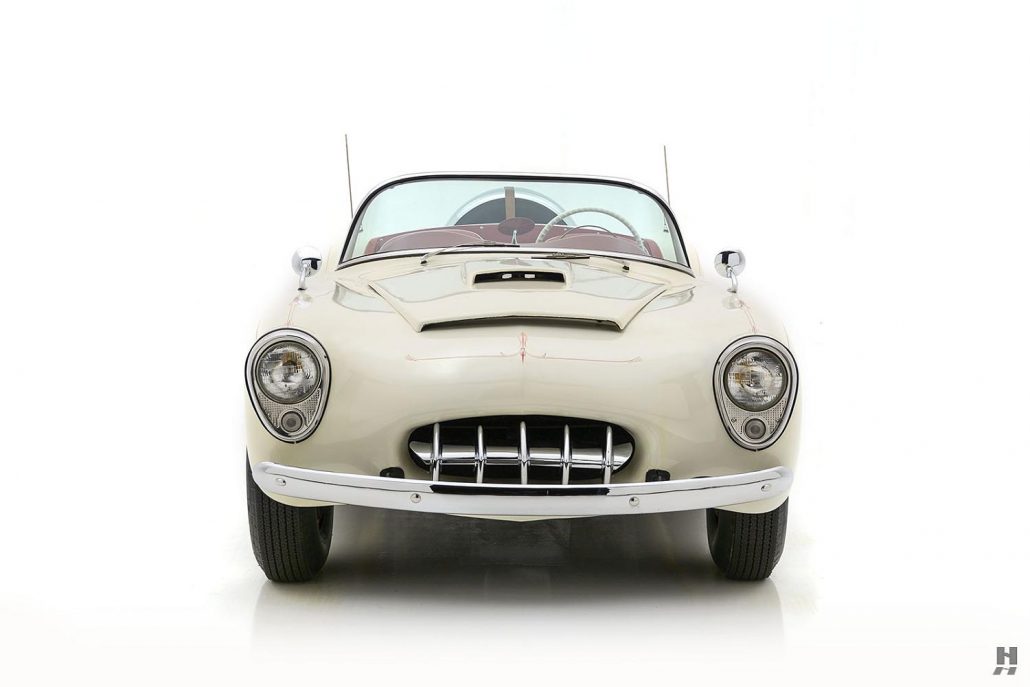 The early 1950s was a fascinating period in the American automobile landscape. Service members returning from duty overseas had experienced the excitement of small, light European and British sports cars and they wanted to recreate that experience at home. Imported sports cars trickled in, but they were expensive, and some found them poorly suited to vast American roads. 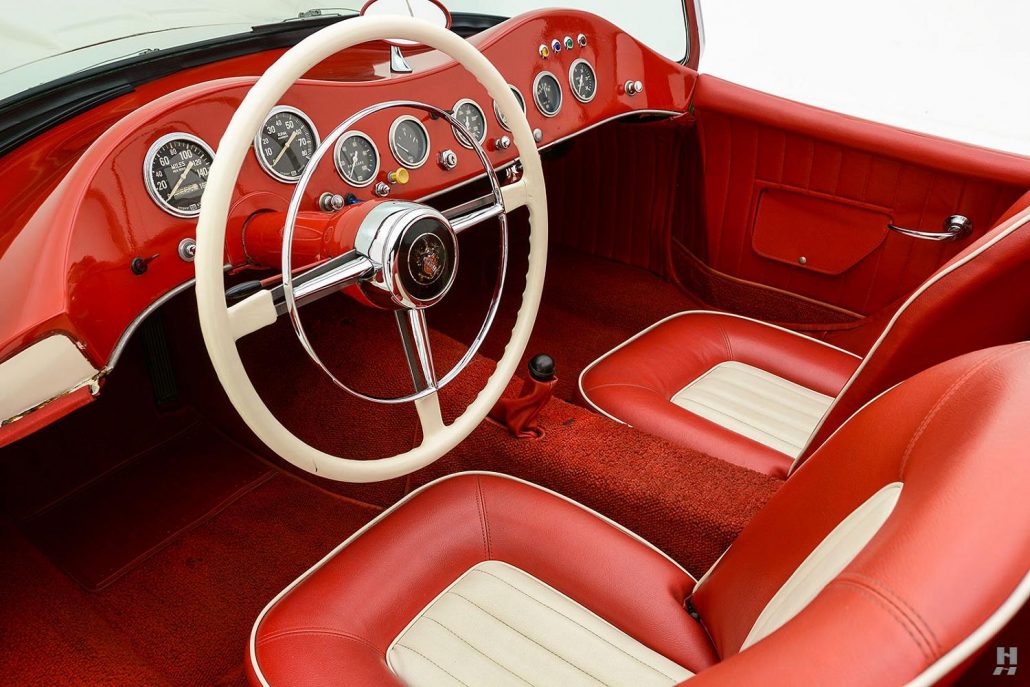 Particularly on the West Coast, the lines between Hot Rod and sports car culture began to blur, as individual enthusiasts took it upon themselves to build sports cars incorporating American drivetrains. The broadening availability of fiberglass coincided perfectly, as car builders experimenting with the material found it robust, easy to work with, and capable of being molded into virtually any shape imaginable. 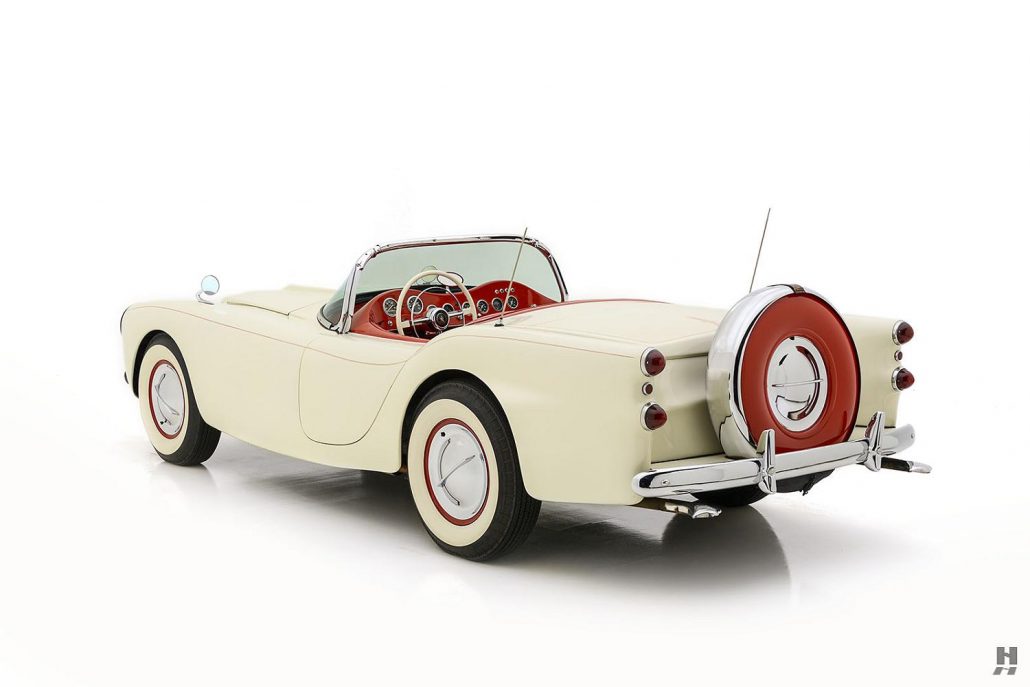 Bill Tritt is considered the father of the American fiberglass-bodied sports car. His stylish, vaguely Jaguar-inspired Glasspar G2 was one of the first commercially available fiberglass cars. Sold primarily in kit form, Tritt did produce a handful of complete, turnkey vehicles. At the time, none of the Big Three offered an outright sports car, and with young buyers pushing hard for sportier options, several dealers took it upon themselves to create their own using Tritt’s Glasspar G2 as a basis. 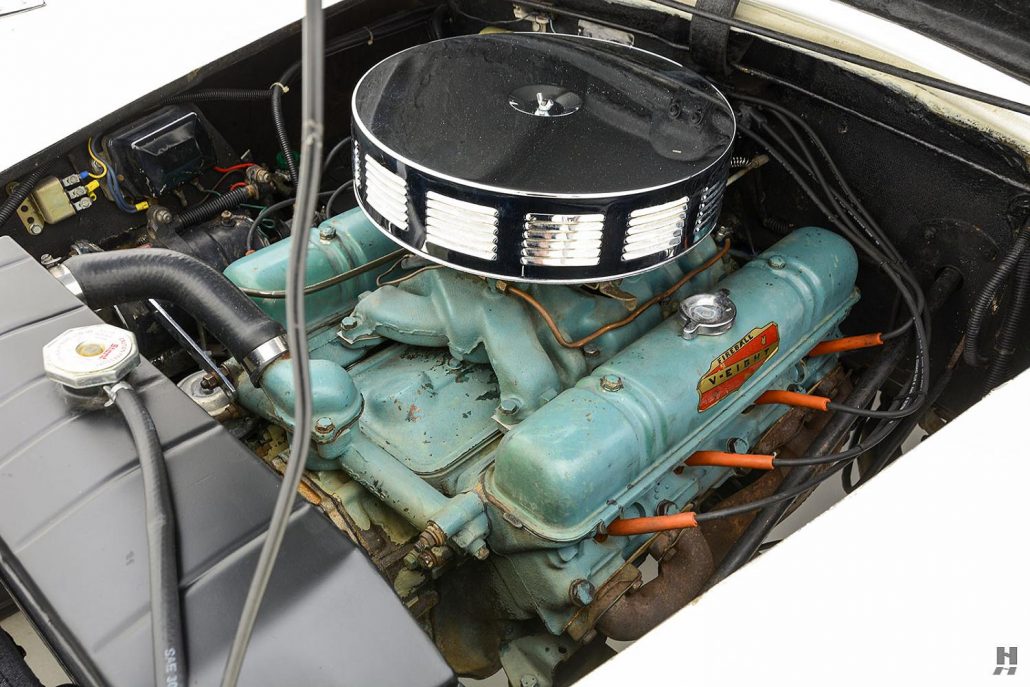 Cars such as the Yankee Clipper and Fiberflash were notable examples of G2s that were built and modified by car dealers to meet growing demand. One dealer that jumped on the bandwagon was B.R. “Woody” Woodill of Downey, California. Woodill operated one of the largest Willys dealers in the country, and he envisioned a version of the Glasspar using Willys mechanicals, going so far as to propose Willys adopt it for production. But the parent company was in the process of merging with Kaiser, and the latter already had a fiberglass sports car in the works, the Kaiser-Darrin.

So Woody Woodill changed his strategy and began offering the Wildfire through his dealership as fully-built cars or do-it-yourself kits. Early cars used the proven if slightly underwhelming Willys flathead inline-six, while later examples featured the ubiquitous and affordable Ford flathead V8. The arrival of the Chevrolet Corvette in 1953 marked the beginning of the end for boutique manufacturers like Woodill, yet he still managed to sell a respectable number of about 100 Wildfires during its brief production run. 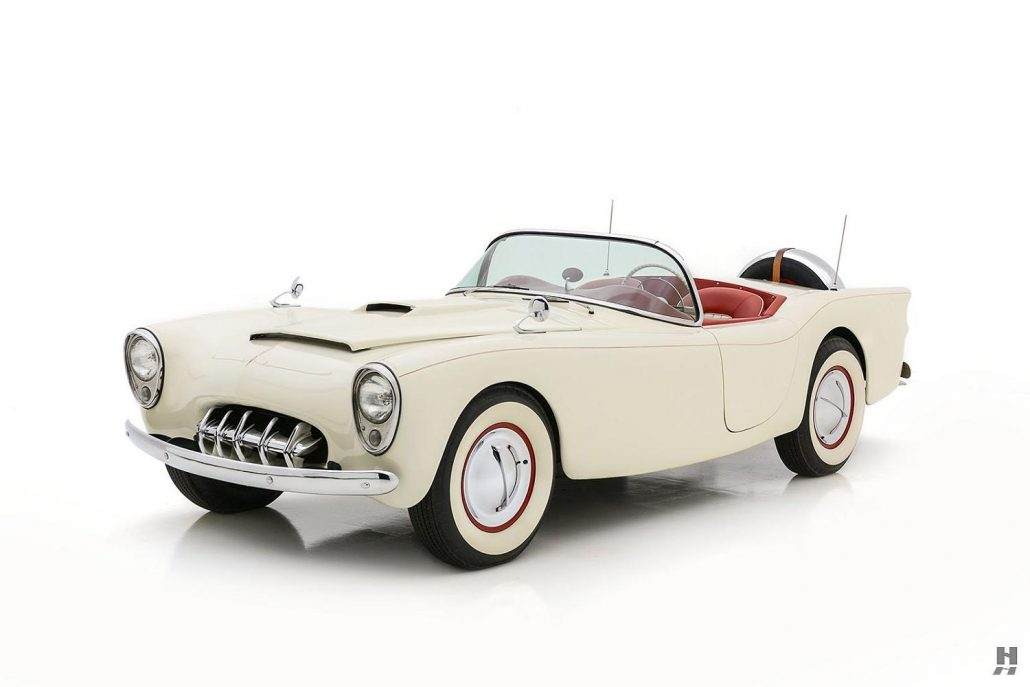 This 1954 Woodill Wildfire is a unique example with a fascinating history. It is believed this is one of only a handful of Wildfires purchased as kits by Harry Clark Buick Agency of Compton, California, and modified with styling cues and drivetrains from the Buick line. At the front, the body was altered to incorporate 1953 Buick headlights and a shortened, modified 1953 Chevrolet grille. At the rear, molds of a 1953 Buick’s rear fenders were taken and transferred to fiberglass to give it a consistent look with the rest of the Buick line. 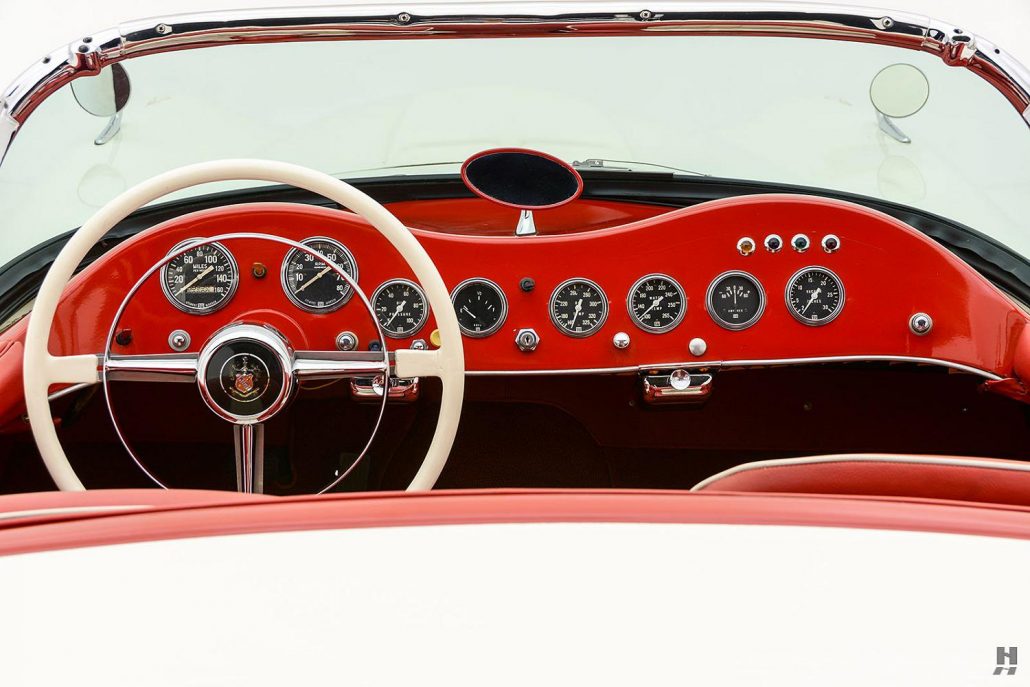 Finally, Clark added a continental kit spare wheel and a racy curved windshield. Under the hood, Clark and his crew eschewed the standard Wildfire’s inline-six-cylinder engine in favor of Buick’s powerful new overhead valve 322 cubic-inch “Nailhead” V8. The engine paired to a Dynaflow transmission with the shift lever relocated the floor for a sportier feel. The October 1954 issue of Motor Life magazine reported a Wildfire-Buick very similar to this car ran an impressive 95mph at the Santa Ana drags.

This car is one of just a few known Wildfires left in existence with its original Buick modifications, and it presents in incredibly well-preserved condition. The white paint is believed to be almost entirely original, judged by the beautiful period pinstripe job, signed by the artist and dated 1953 on behalf of A&M Custom Body & Paint, Orange, California. The body is in very good overall condition, with a few cracks noted in the fiberglass, primarily in the door jambs. The car retains the original Buick taillights, Chevrolet grille, and Ford bumpers, while a late-model Ford trunk lock appears to be the only deviation from how it left the dealership. Red steel wheels, wide whitewall tires, smooth hubcaps, and twin antennas round out the ultra-1950s look. 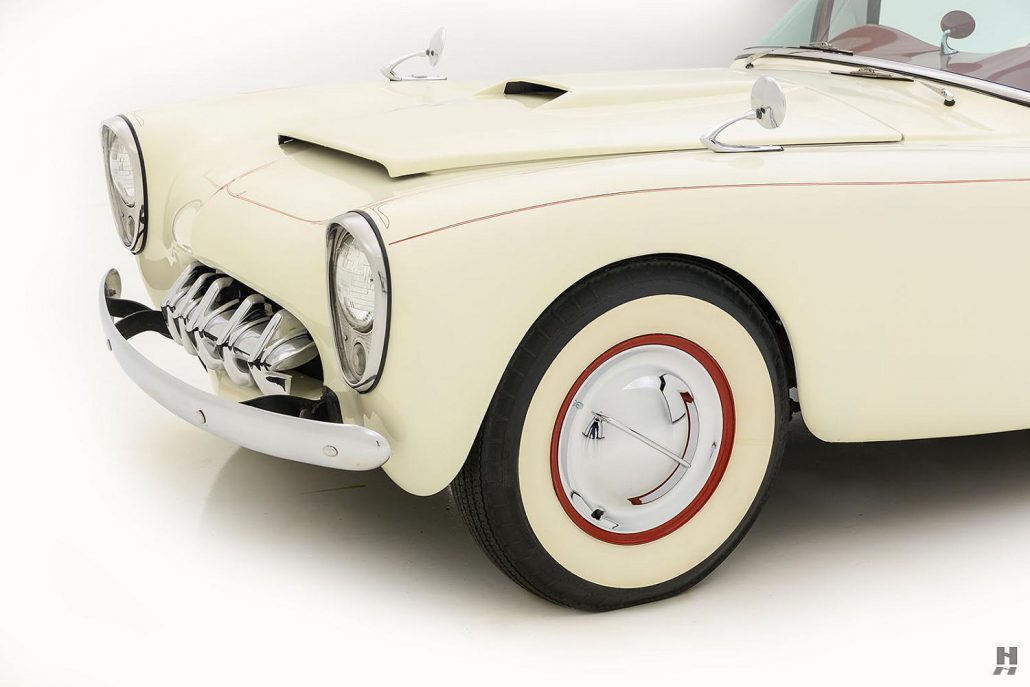 The interior features red and white vinyl trim, red nylon loop carpet, and a red-painted dash, all of which present in excellent original condition. The seats and matching door panels are in superb order thanks to the use of hard-wearing upholstery material. A 1953 Buick steering wheel is suitably flashy, and the period-correct Stewart-Warner instruments look right at home in the dash.

Buick’s Nailhead V8 fits nicely in the spacious engine bay of the Wildfire. It appears to be primarily stock on the outside, breathing through a single 4-bbl carburetor on a standard manifold, with a period-style louvered chrome air-cleaner on top. Dual exhaust, complete with period fan-style tips give the Buick V8 a satisfying, snappy soundtrack. The engine bay displays an appropriate level of patina, and it runs well with power going through the original Dynaflow automatic transmission. 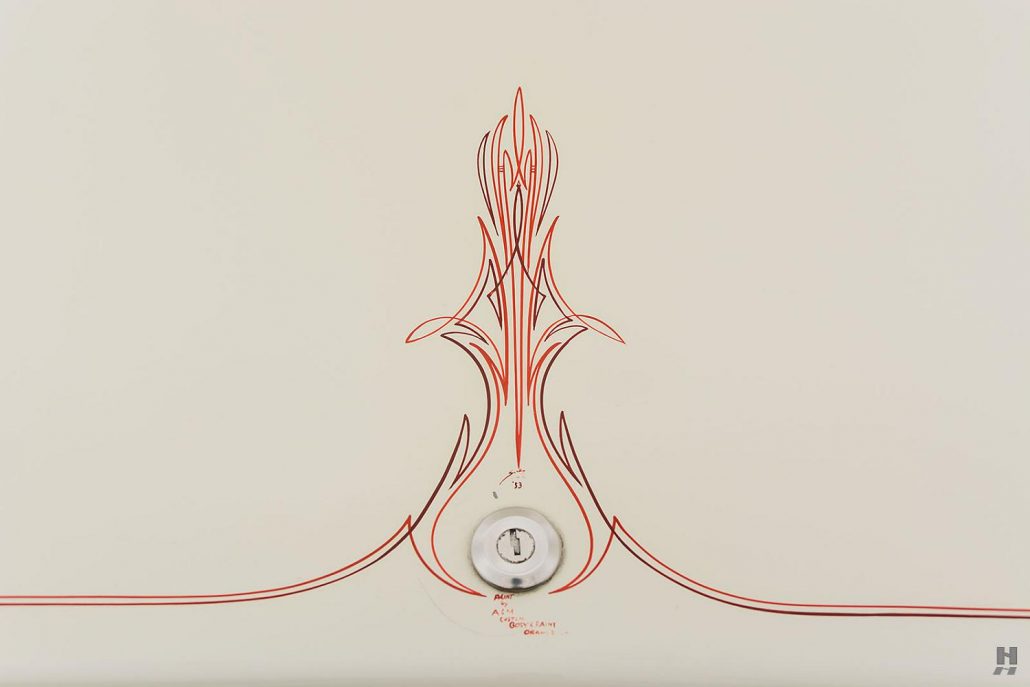 Today, we can thank Bill Tritt, Woody Woodill, and others for helping the U.S. car industry see the value in a home-grown American sports car. Without their creativity and brio, Detroit may never have caught on to the sports car revolution. The fascinating history of this particular Wildfire and its numerous distinct features make it a real standout in the esoteric world of Glasspar-bodied cars. Presented in unrestored condition, this Wildfire is sure to please discerning collectors of rare and unusual sports cars. 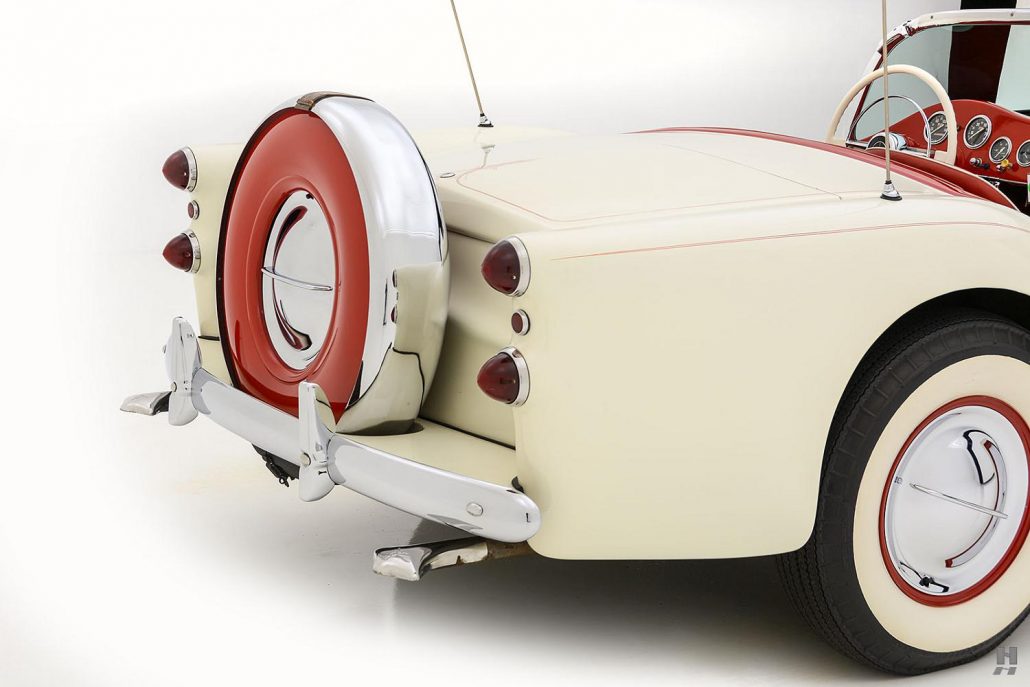 You can visit the Hyman Ltd., website and review additional details about this Wildfire for sale by clicking on the following link: