Early on, one of the individuals who coached me on the history of postwar American Specials was Fred Roth of Thousand Oaks, California.  So much of the history of postwar handcrafted cars was undocumented and details were scarce – particularly on the cars I was studying from the 1950s.  Fred Roth always lent an ear and shared with me what he knew – as he did with anyone who asked for his help.  And he knew these cars well.

Fred was the earliest known collector of postwar handcrafted cars.  Starting with an article in 1974 about Fred’s Wildfire (a car his family still has today), he led the pack about saving, promoting and sharing the history of these special cars.

I’ll be sharing more about Fred Roth, his collection and his impact on the car hobby in this and future articles here at Undiscovered Classics.  Today, we’re going to share a part of a book he published in 2015 about his collection – a section which focuses on the 1952 Maverick Sportster.

In 2015, Fred published a book on his collection – one that was a family affair.  His wife Deanna and son Chris were as involved with the collection and activities as a family could be.  Let’s take a look at one section of this book today – a section that focuses on their 1952 Maverick Sportster. 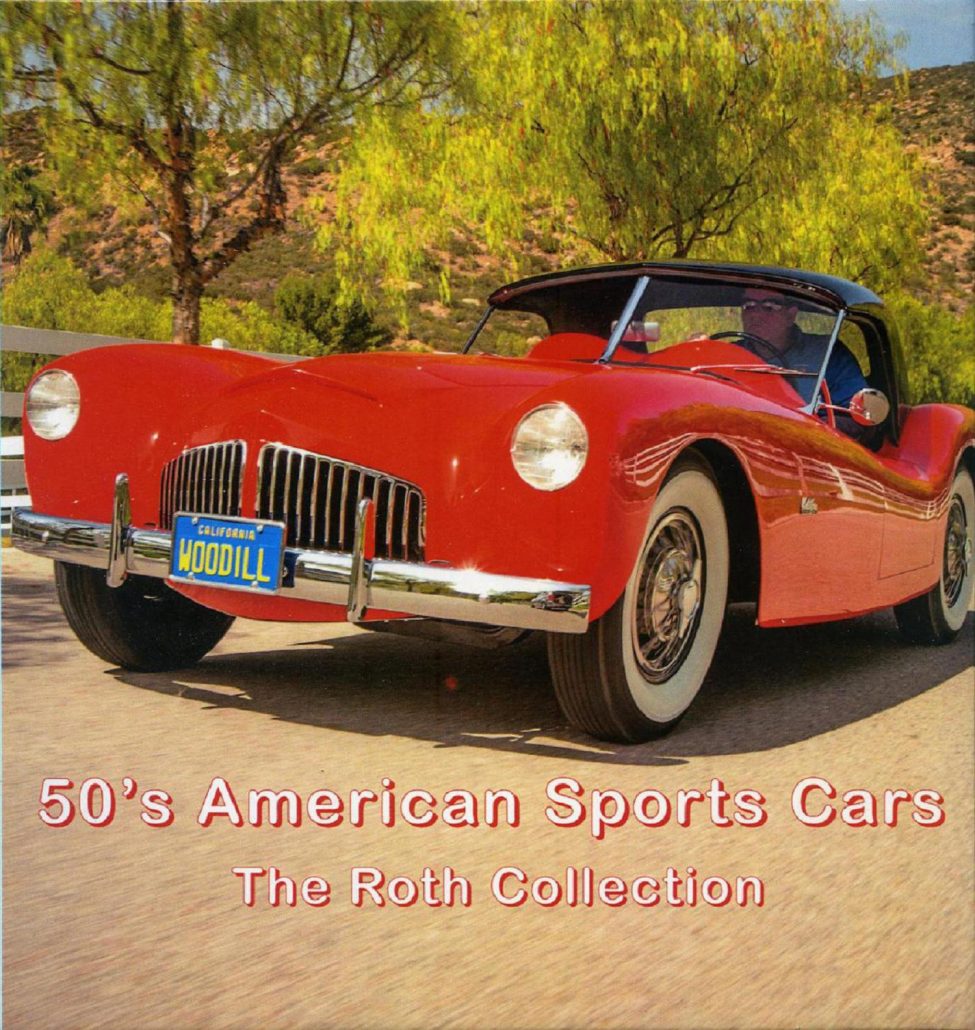 H. Sterling (Smoke) Gladwin had always had a love affair with fast automobiles.  In his youth, he goosed a 1925 Dodge until it clocked 86 mph.  Later he pushed his 1933 Terraplane boat tail speedster to 113 mph!  Eventually, he entered his trade as an aeronautical engineer, but the Southern California rat race was too much for him.  During this period he was the major influence for the development of the trigger mechanism used in the atomic bomb.

Smoke moved to Mountain View, California where he opened a small fiberglass firm.  Since his love of the auto never waned, he decided to build a fiberglass sports car to be affixed to a 1939 LaSalle he owned.  Since he had never forgotten the Terraplane, and had a great love for classics of the 30’s, he designed a sleek boattail that incorporated all the styling designs from that period with the new styling of the fifties. 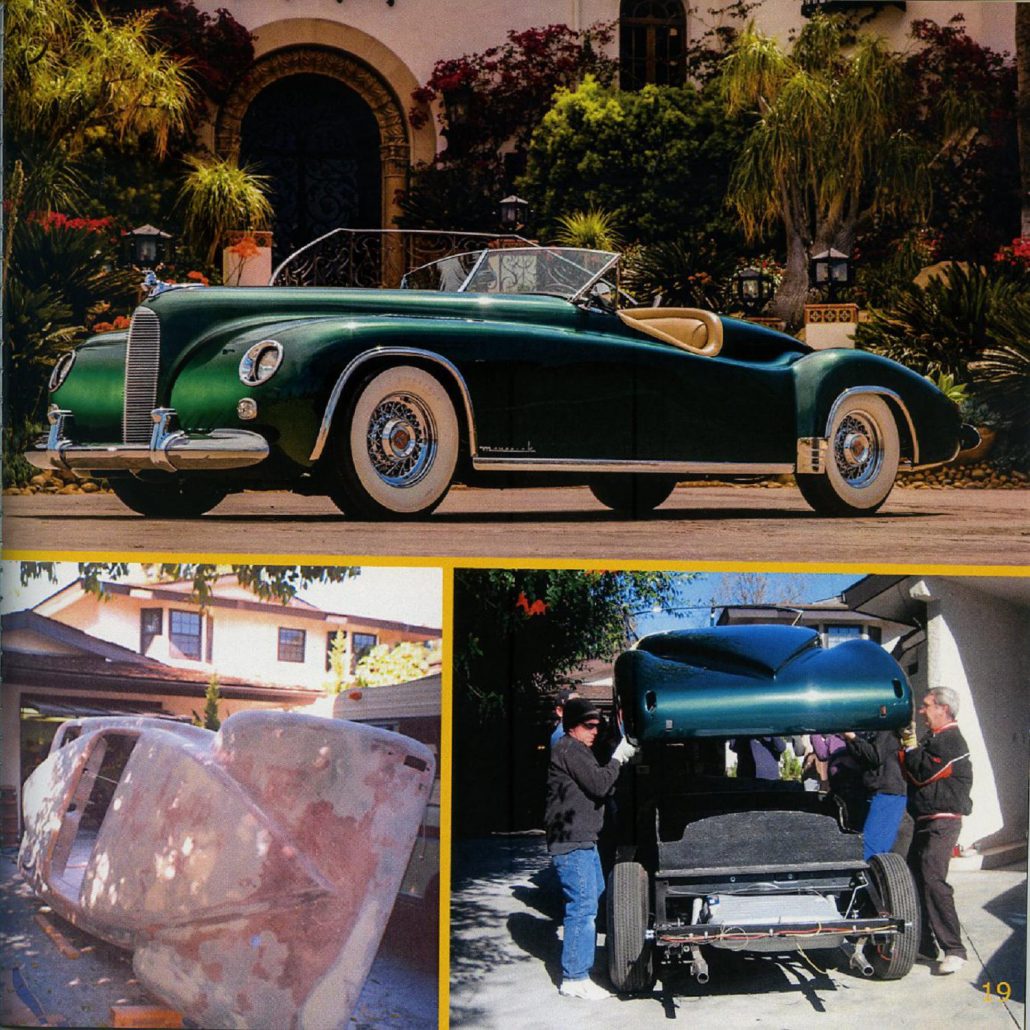 When he finished, the car was a hit with all that saw it.  His admirers urged him to start a company manufacturing the cars.  In 1954 he decided to do so and modified his prototype to make it more saleble.  Since the initial car was a one-piece body that required the body to be tilted “funny car” style to access the engine, Sterling added a hood, leaving the original louvered access panels as decorations.

He affixed the body solidly to the frame and told prospective buyers that they could have the option of one or two doors, if they were turned off by the lack of them on his car.  The frosting on the cake was adding a new Cadillac Eldorado OHV V8 engine equipped with dual 4bbl carbs.  Smoke  named his creation, the Maverick Sportster.  The body weighed 210 lbs and was affixed to a modified Cadillac frame, giving the car a massive 128 inch wheelbase.  The turned copper dash held both Studebaker and Ford instruments, as well as a Stewart Warner tachometer. 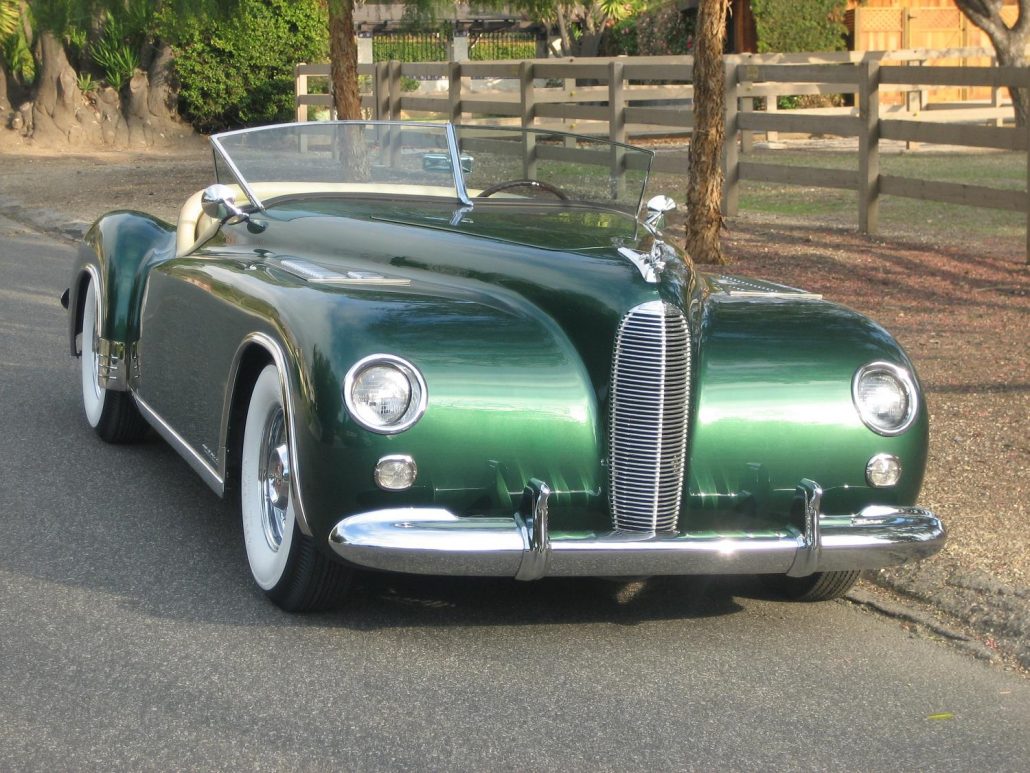 The grill was modified from two 1940 LaSalle grills, bumpers were 1941 Cadillac, 1949 Lincoln headlamps, 1949 Mercury park lamps and tail pipe tips reminiscent of the classics of the 1930s.  The car was a fair weather roadster because it had no top or windshield wipers.  To the best of our knowledge, six additional complete cars were built with an unspecified number of shells never completed before the shop was closed up.  Although we are not sure of the number of years the Maverick was sold, we do know Smoke closed the doors of his fiberglass shop in 1968.  Had he held out for two years longer, Ford would have given him a handsome sum for the name.  Gladwin’s only comment about that was, “It was unfortunate the name ended up on such a tin can.” 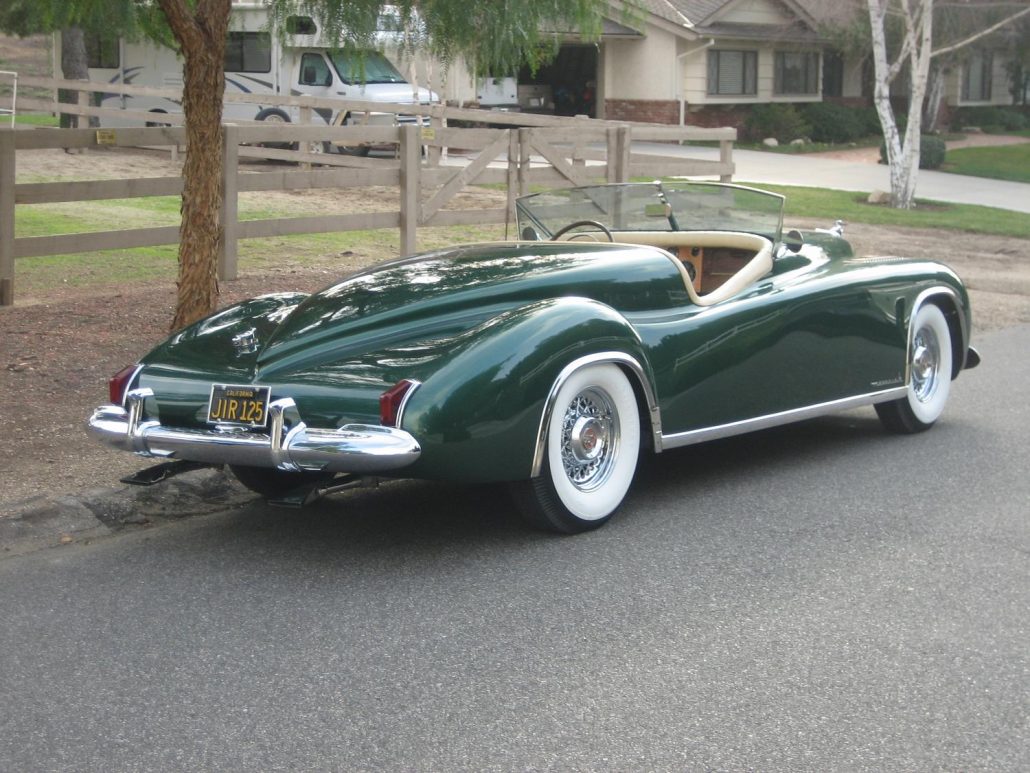 We found the prototype while on a trip to buy an Edwards American.  The car had been given a budget restoration and some parts had been changed.  We did a complete re-restoration including reglassing the entire body.  With the parts replaced, body reglassed and repainted, interior redone, the car was ready to show.

It has attended many shows including Pebble Beach, winning multiple awards including best of show at the Muckenthaler and first in class at Amelia Island.  Our Maverick was the featured car in 2010 at the Petersen Automobile Museum’s salute to fiberglass.  Smoke’s legend lives on! 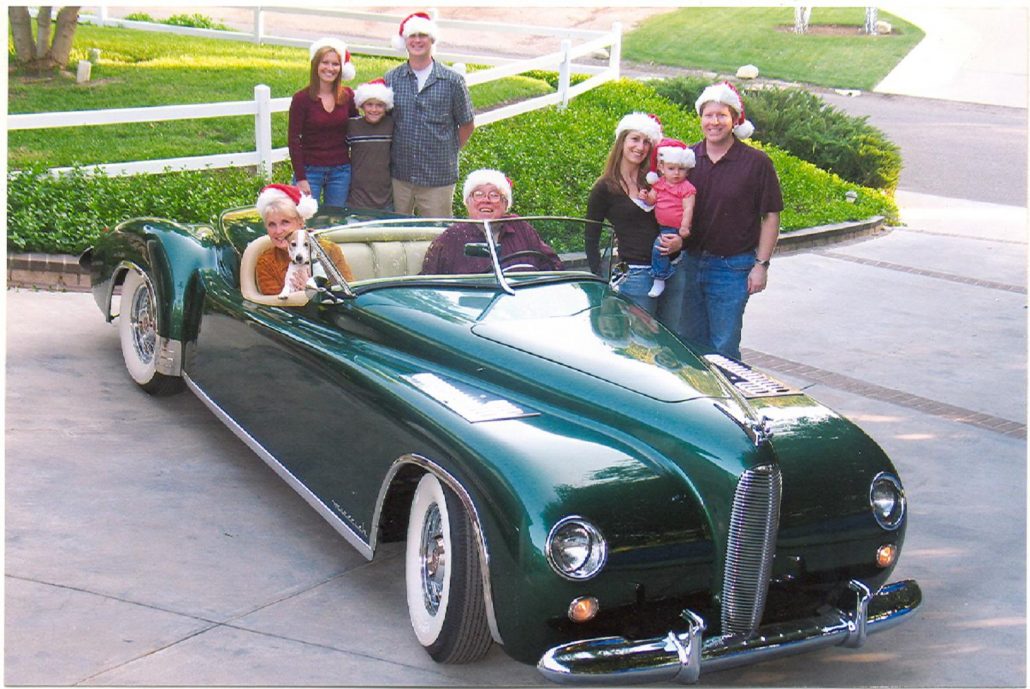 You can read more stories in Fred Roth’s book and learn more about The Roth Collection by exploring the “Fred Roth Archives” within our Undiscovered Classics website.  We have been working with Chris Roth, Fred’s son, to highlight many different aspects of the collection from the cars to the publications and articles that discuss the cars and their history. 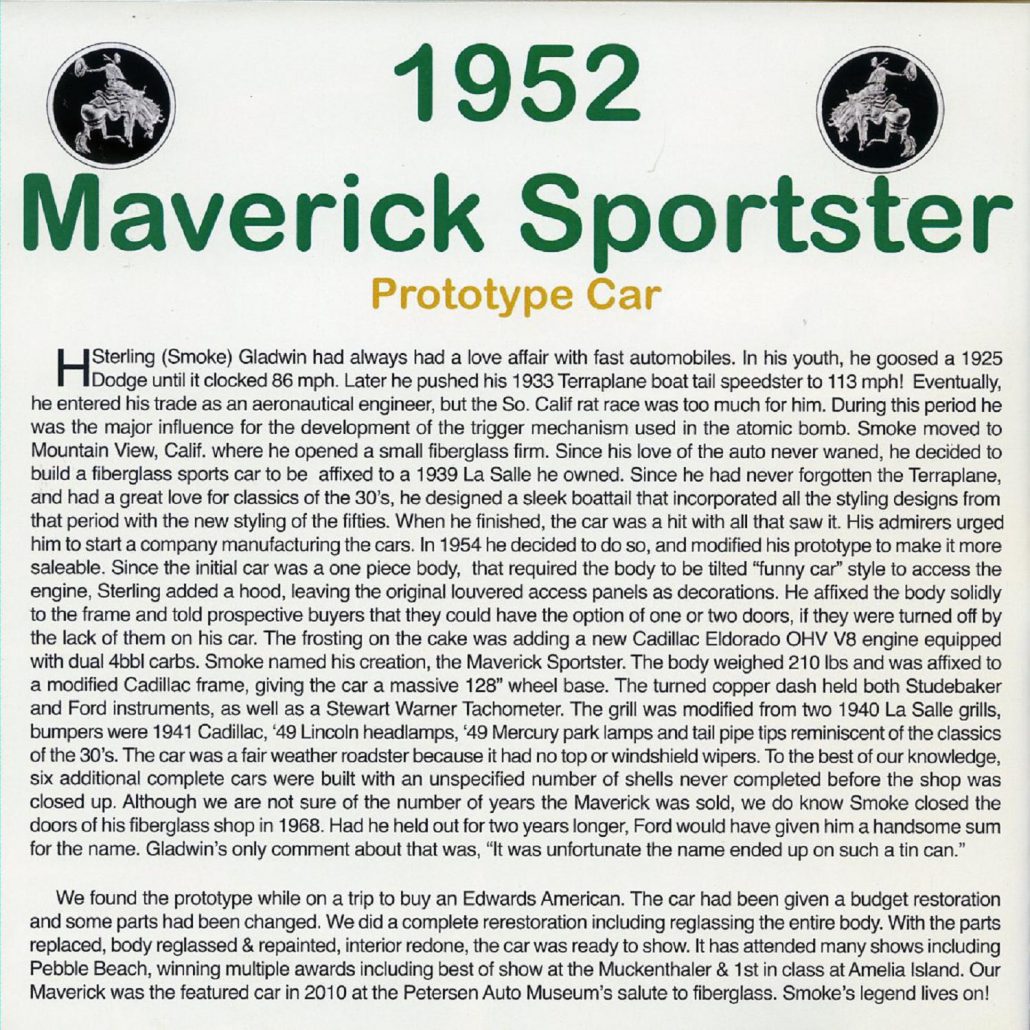