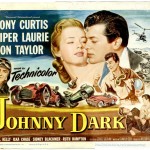 Here’s the “Title Card” for the Movie “Johnny Dark”. Title Cards Usually Showed all Key Movie Stars, and Listed the Credits Too. “Title Cards” Were Designed to Represent the Entire Film Rather Than A Single Scene.

As most of you know, the movie “Johnny Dark” is an important piece of history for fiberglass cars of the 1950’s.  After all, Universal Studios featured several fiberglass sports cars in the movie which included:

Other sports cars appeared in the movie, too, including a Kurtis Sports Car (KSC) and the Tatum Special built by good friend Chuck Tatum.   For those of you who want to review some of the “Johnny Dark” stories on our website, click on the following link:

So it shouldn’t surprise you that I’m always on the lookout for memorabilia from this movie such as the elusive “Johnny Dark Trophies” given out as promotional pieces by some movie theaters.  There are lots of special items out there from this movie gang.

Lobby cards are like movie posters but smaller, usually 11″ × 14″.  They are typically issued in sets of eight for a movie with each card featuring a different scene from the film.  As the name suggests, these small movie posters were designed for display in a theater’s lobby or foyer with the intention of luring patrons into the theater by showing glimpses of key scenes from the movie. 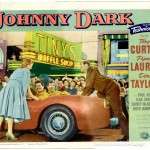 Here’s a Great Lobby Card Showing a Partial View of the Woodill Wildfire – Called the “Idaho Special” in the Movie.

* One Title Card (TC): A lobby card of special design usually depicting all key stars, listing credits and designed to represent the entire film rather than a single scene

* Seven Scene Cards (SC):  Each of the seven scene cards are designed to depict different scenes from the movie

“Johnny Dark” followed this pattern with 1 Title Card and 7 Scene Cards for a total of 8 Lobby Cards.  Copies of the “Johnny Dark” Lobby Cards appear in the gallery of pictures below and throughout this story.

That’s the title (above) of one of the press releases I’ve found from the movie in 1954.  Keep in mind that Johnny Dark was a top flight movie back when it debuted.  It was meant to capture the youthful enthusiasm of sports car racing, along with the excitement of designing and driving your own sports car.  Nothing could be more fun to the young American male wanting to share in the excitement of sports car racing, so it made sense that Universal Studios should team up in some way with the SCCA. 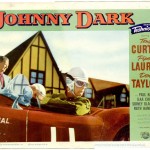 Here’s Another Close-Up of the Woodill Wildfire, A.K.A. the “Idaho Special,” at the Beginning of the Race.

“Assurances of full cooperation with exhibitors playing “Johnny Dark” have been received from the Sports Car Club of America.  This is the organization that sponsors the big sports car races and rallies throughout the USA.

Details of the tie-up remained to be finalized at press time.  Exhibitors can get the complete story of this cooperation by contacting local members of the club.  Your newspaper automobile editors or a local branch of the AAA can help you locate club representatives.

Exhibitors, whose advance campaigns or play dates coincide with any of the official Sports Car Club of America events, have a natural tie-up.  Other showmen are urged to take advantage of the tie-up by getting local SCCA members to put on a special “Johnny Dark Race”, or, if this is not practical to get cooperation for a turnout of sports cars for your opening night – called “Sports Car Night.”

The information in the Press Release continued and suggested coordinating a “Sports Car Night” at their “Johnny Dark” movie premier: 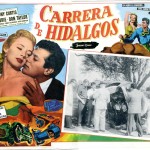 “The sports car craze has swept the nation to the extent that even in smaller towns there are many owners of the little automobiles.  Automotive editors, automobile clubs, and license bureaus are in a position to advise you concerning the number of sports car owners in your town.  Consider the possibility of a “Sports Car Night” during your “Johnny Dark” run.

Get police permission to rope off your street at night so that only owners of sports cars can park therein.  This will probably result in the greatest gathering of sports cars ever seen in your town and should be worth a newspaper photo.  Perhaps you can promote and award some special prizes for best looking sports jobs.”

Quite a write up for a Press Release and included great suggestions to promote the movie.  And…I’ve found some evidence that several of these “Sports Car Nights” occurred, and I’ll share that information in a later story.

I wonder if a Grantham Stardust ever showed up at one of these “Sports Car Nights?”

Lobby Cards are no longer used in U.S. theaters and are rarely produced for today’s films which makes these the perfect collectible to celebrate your interest in vintage fiberglass sports cars.   So off to Ebay, gang, and add some “Johnny Dark” Lobby Cards to your collection today.  After all, you need something on those garage walls of yours – don’t you??? 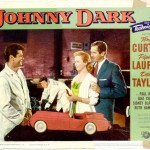 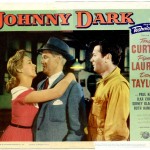 Here’s the “Title Card” for the Movie “Johnny Dark”. Title Cards Usually Showed all Key Movie Stars, and Listed the Credits Too. “Title Cards” Were Designed to Represent the Entire Film Rather Than A Single Scene.

Here’s a Great Lobby Card Showing a Partial View of the Woodill Wildfire – Called the “Idaho Special” in the Movie. 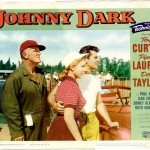 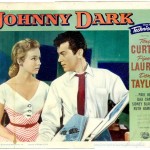 Here’s Another Close-Up of the Woodill Wildfire, A.K.A. the “Idaho Special,” at the Beginning of the Race. 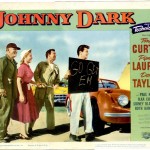 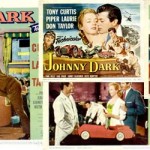