Last year Brian Meyer found a Wildfire near Houston, Texas and through collaboration with Brian we were able to identify the Wildfire as Warren Eding’s “Darciedi.”  Here’s a photo of what the Darciedi looked like when first completed: 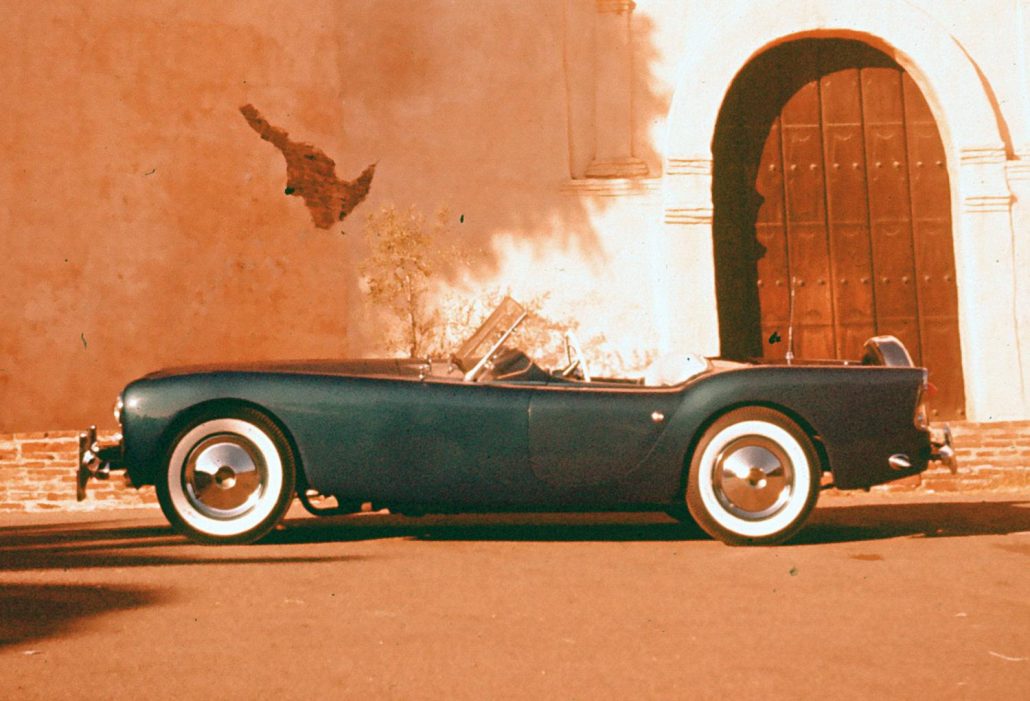 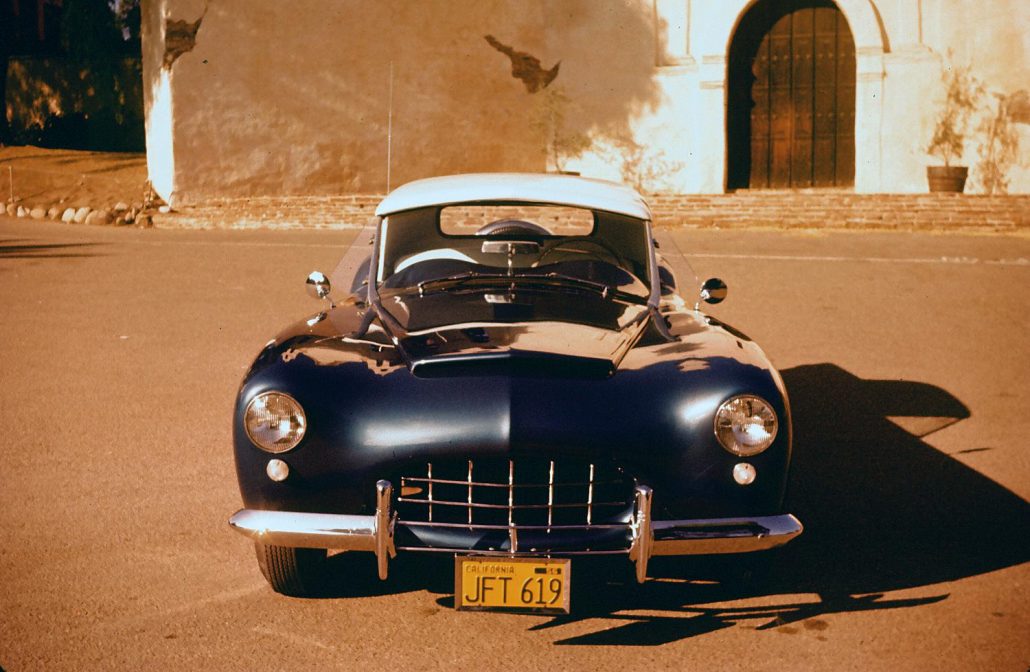 As you know, I’m about three months into the restoration of the Darciedi. Its been both fun and challenging getting this car back to the way it was when Warren originally built it. I’ve had the luxury of using a few modern tools (liquid cooled cold saw, lathe, Bridgeport mill) and technology (Undiscovered Classics, ebay, etc.) that original Wildfire builders wouldn’t have had access to back in the day.

While these tools can certainly speed up the process, a restoration of this scale still requires a huge commitment and many man hours to complete. I’ve been fortunate to have couple of friends and my son that are equally committed to helping me see this project through to completion. Here’s a quick overview of what’s been done over the past few months.

As you’ll recall, the body was in sad shape when I found the car.  Click here to see the condition of the car when I bought it.   All of the structural fiberglass repairs have been made, and the body is currently off the car waiting to go back on the new chassis. Once back  on the chassis, final body work and priming will be done, and it will be once again ready for paint. 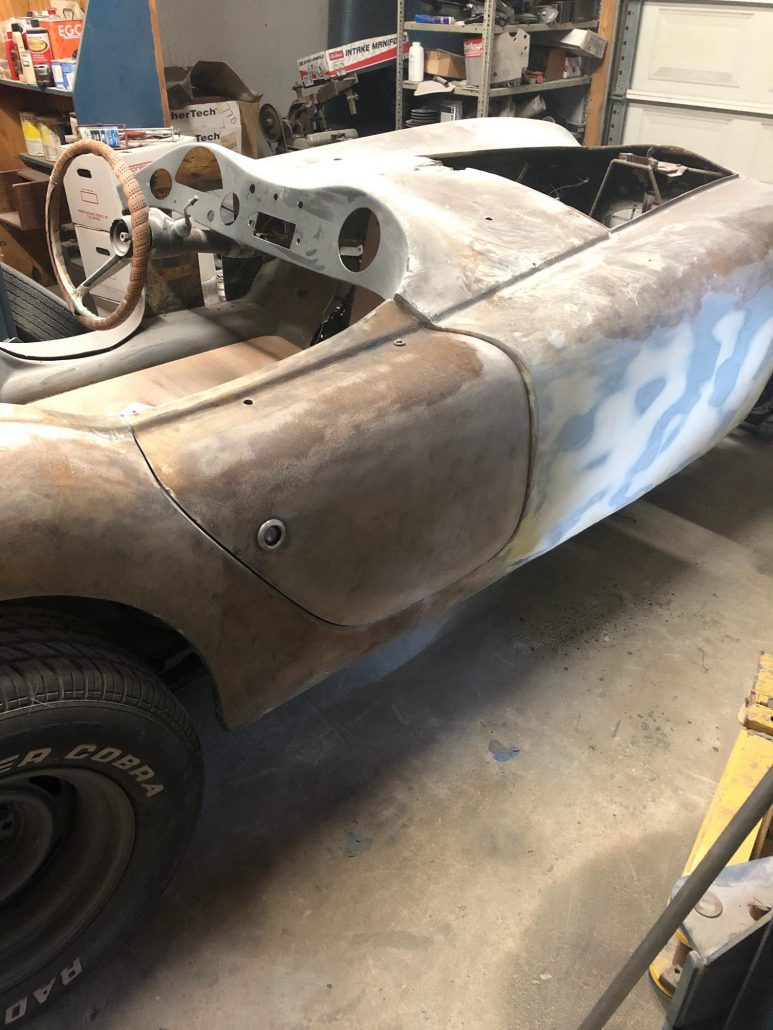 You’ll also remember the frame was completely unusable. The time it spent sunk to in the mud completely rotted most of lower structure. The frame was originally constructed by Woodill out of 14 gauge, 2×3 box tubing. The first thing I noticed when I pulled the body off and got a good look at the frame was how crudely the frame was constructed. I was told to expect this. Many of the brackets were flame cut, and the weld quality was adequate at best. 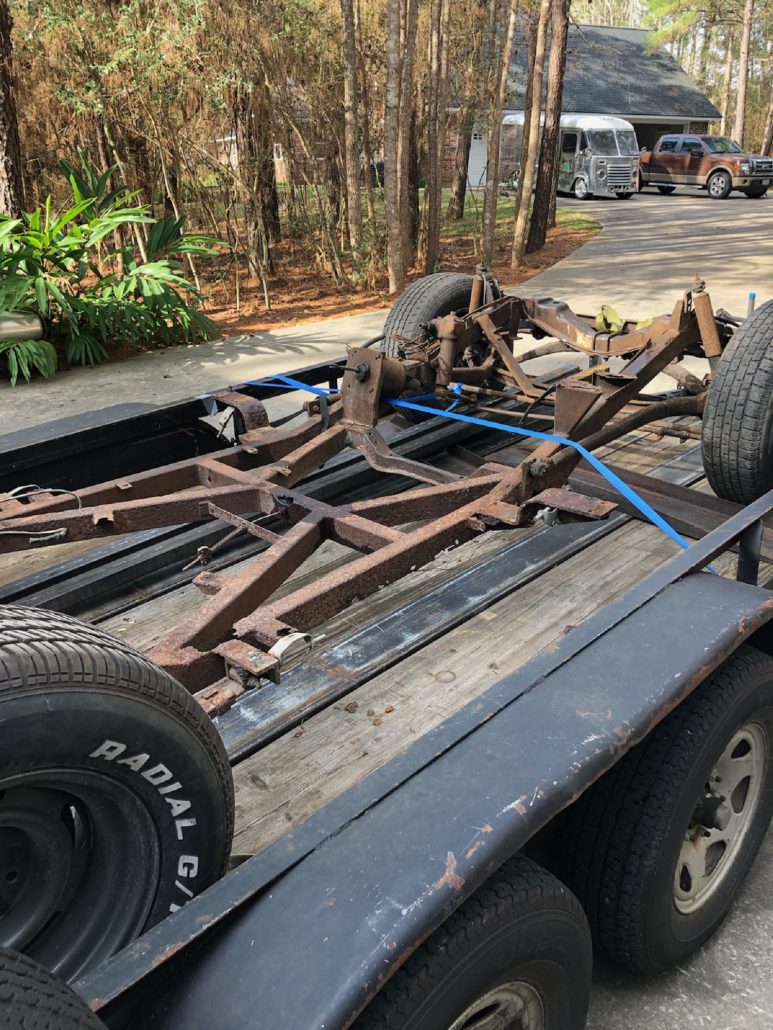 Despite this, it was surprisingly straight, and square. I was able to pull all the necessary measurements and angles off of the original frame to build a replica frame which is now complete. I had to resist the urge to make improvements to the frame. I had to remind myself often that this was a restoration project, and not a resto-mod project. The end result is a frame that looks identical to the original Woodill frame with a slightly more refined fit and finish. I did all the fitting and tacked the frame up, and my son did most of the finish welding. He did a great job! 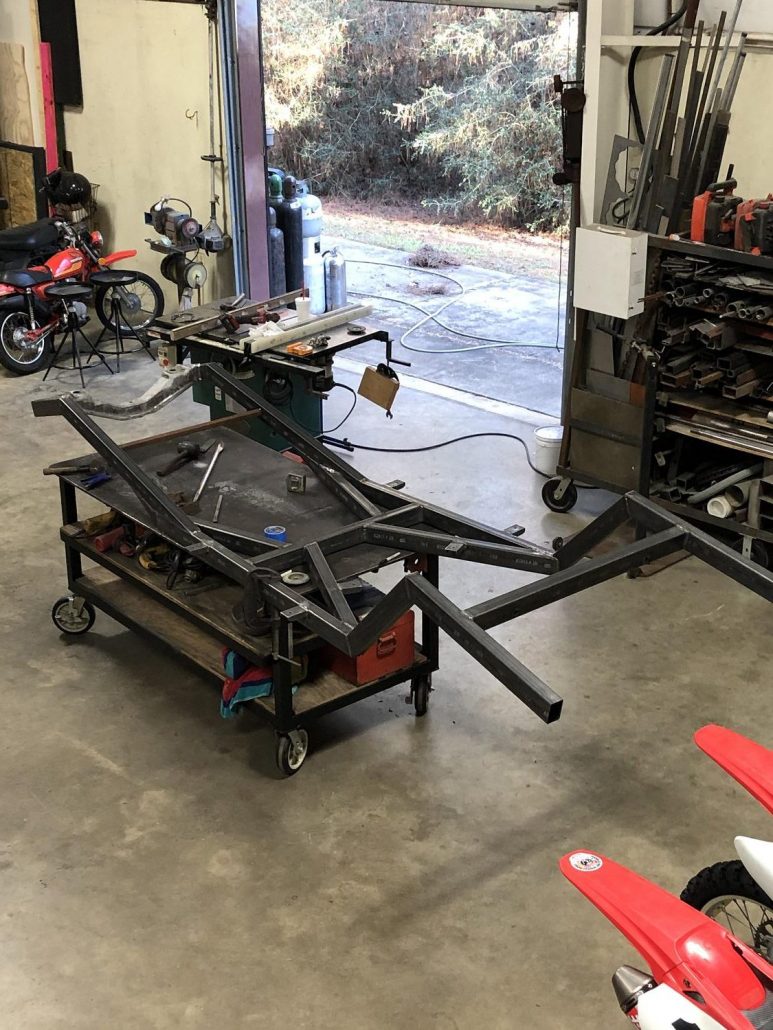 Over the past few months, I’ve also been able to identify and source most of the parts I’ll need to complete the car. The pictures Geoff provided me of the car from the mid-50’s have proven to be very helpful. I was able to enlarge these pictures to identify many of the parts that Warren used. The single bolt Lucas mirrors are an example. I sent a picture of the interior to a radio restoration shop, and they were able to tell me the car originally had a mid-50’s Wonderbar radio in it. I found N.O.S. headlight buckets and headlights on Ebay. I was also able to find a set of new 1953 Studebaker hubcaps. 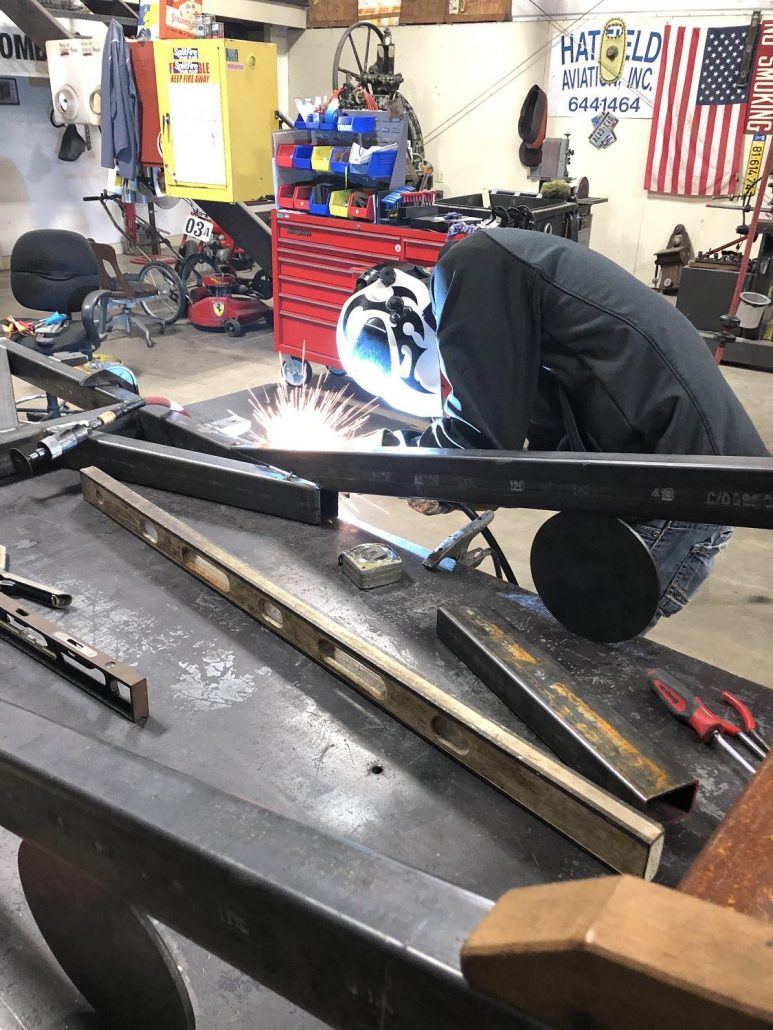 I spent a lot of time trying to identify a gold box that I could see mounted under the dash in one of the photos. It had what appeared to be a door on the front of it. After hours of searching, I finally figured out it was an aftermarket heater. I was able to find what I thought was the right one. I was pleasantly surprised when I received it to see it fit directly on the firewall using the mounting holes that Warren drilled over sixty years ago. 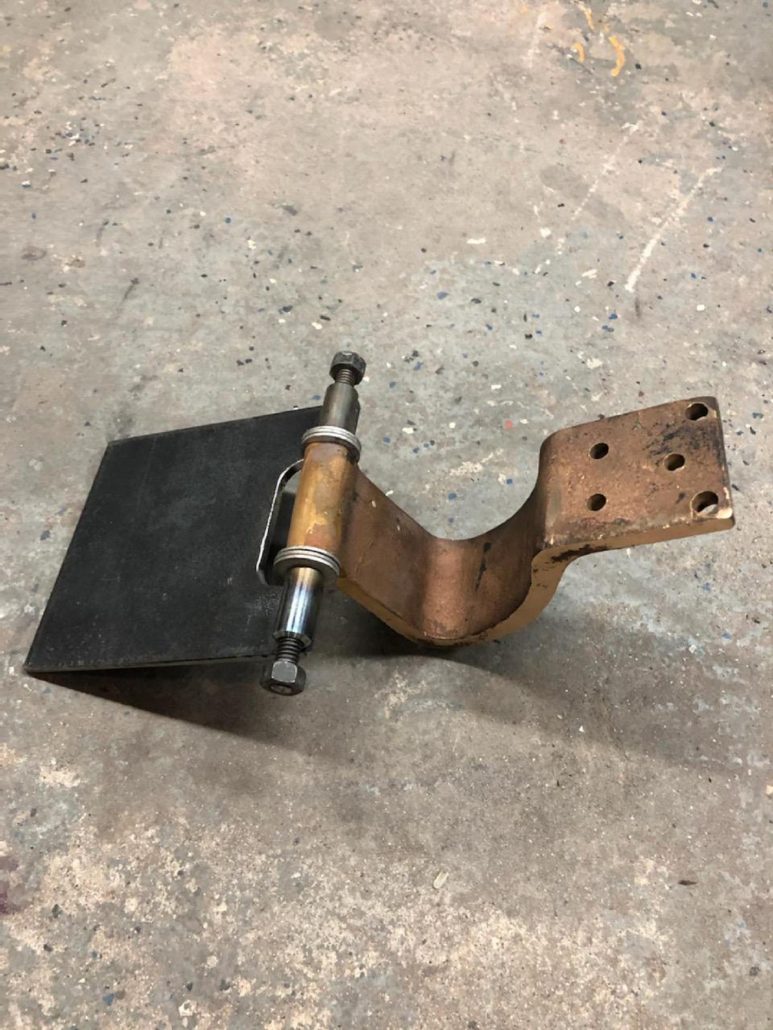 Finally, the motor that was in the car was destroyed from being in the elements so many years. At first, I thought this was the original motor the car was built with. I later discovered it was a 1959 Pontiac 389. By reading one of the magazine article that the car appeared in, I was able to determine that Warren had built the car with a 1955 Pontiac 287. I met a man in Utah that had a fully restored 1955 Pontiac that he was installing a late model drivetrain in. I was able to get a fresh 287 engine and four speed automatic transmission out of the car, along with the radiator, steering column and steering wheel. 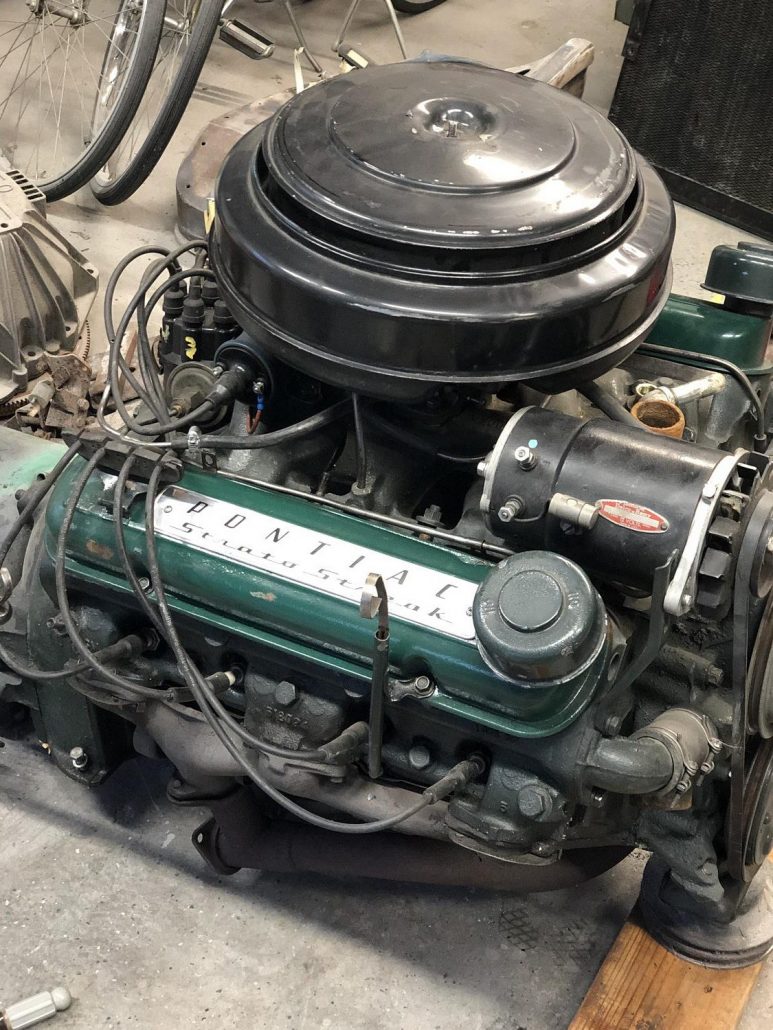 As I look forward to body work and paint, I’ve got to share this with you. I talked to Enie earlier today (Arlene Eding – Warren Eding’s wife), and we were discussing the progress of the car. Eventually, we got to paint color. I explained that in some of the pictures, the paint appeared to be a very dark blue, and in others it appeared to be a lighter blue. She told me she remembered it being a fairly dark metallic blue. We agreed that I would send her several spray out samples and she would ultimately pick the color that best matched her memory of the car. She sounded excited to be part of the process.

Thanks again for all your help.

Let’s Have a Look More Photos 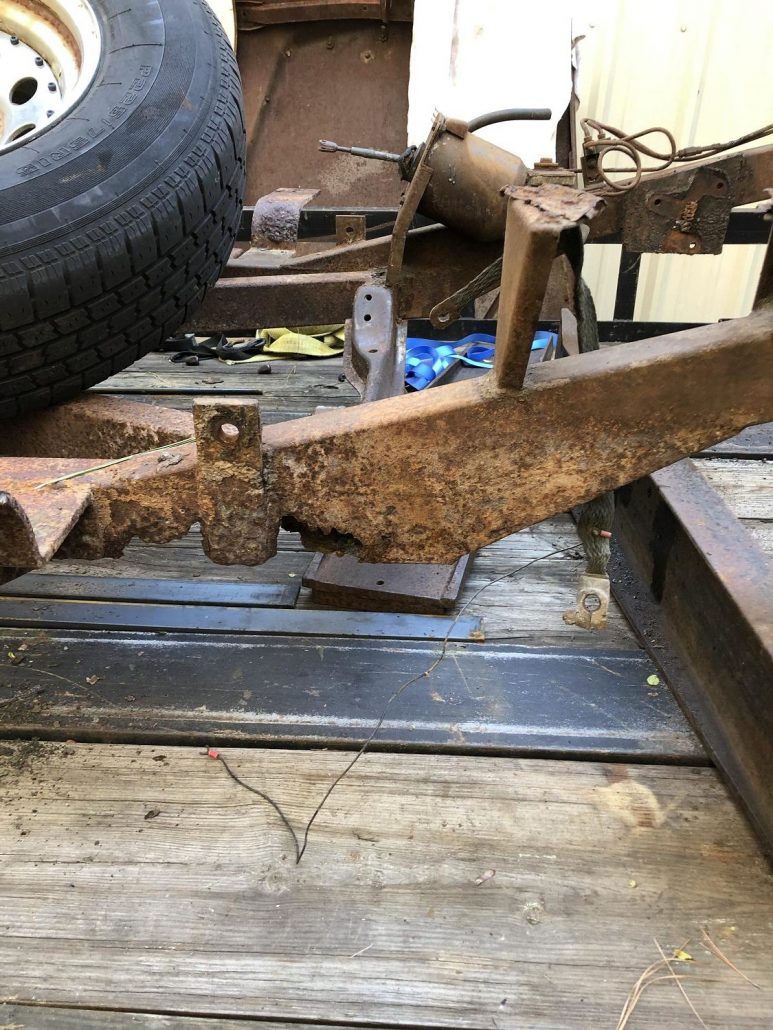 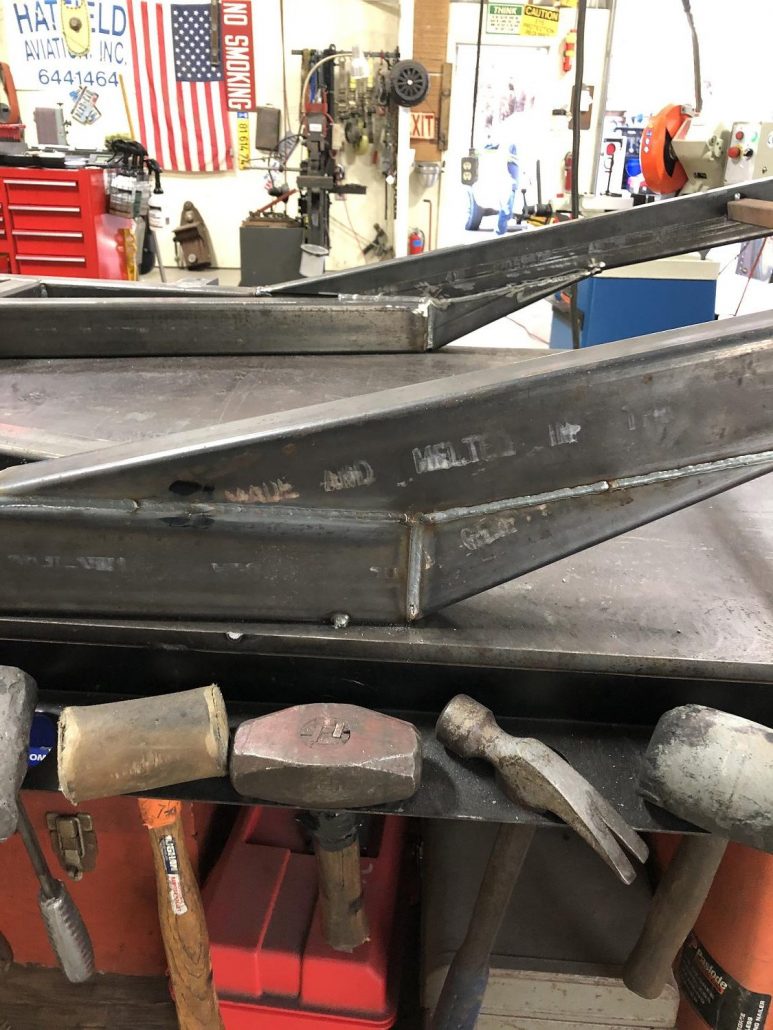 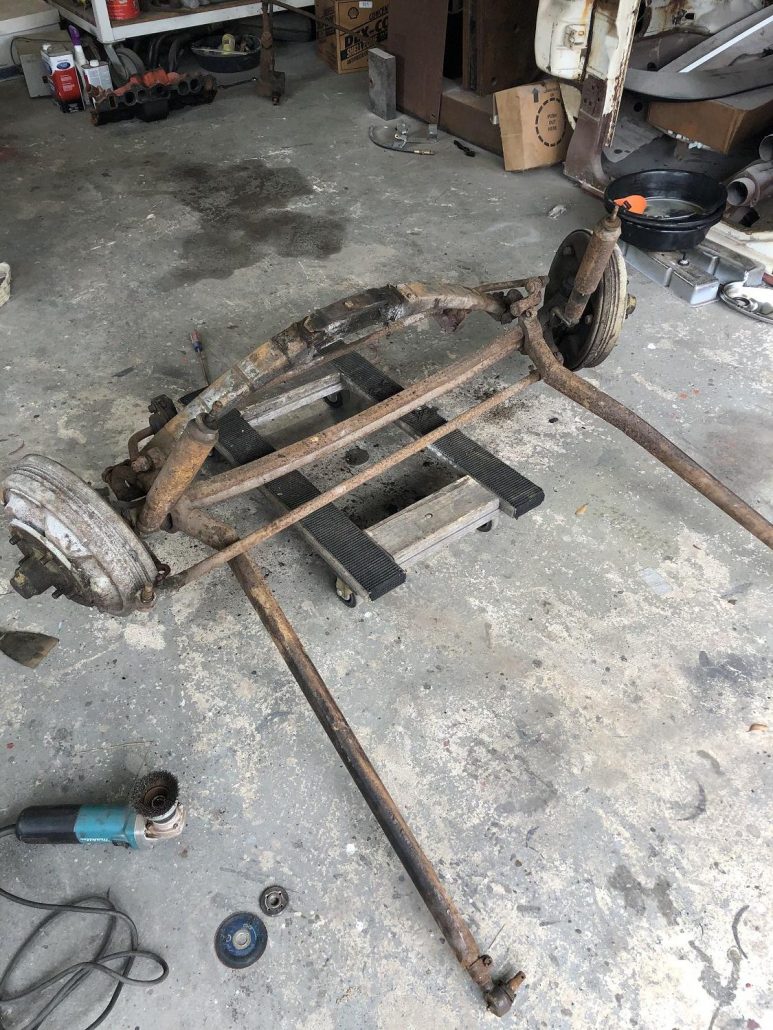 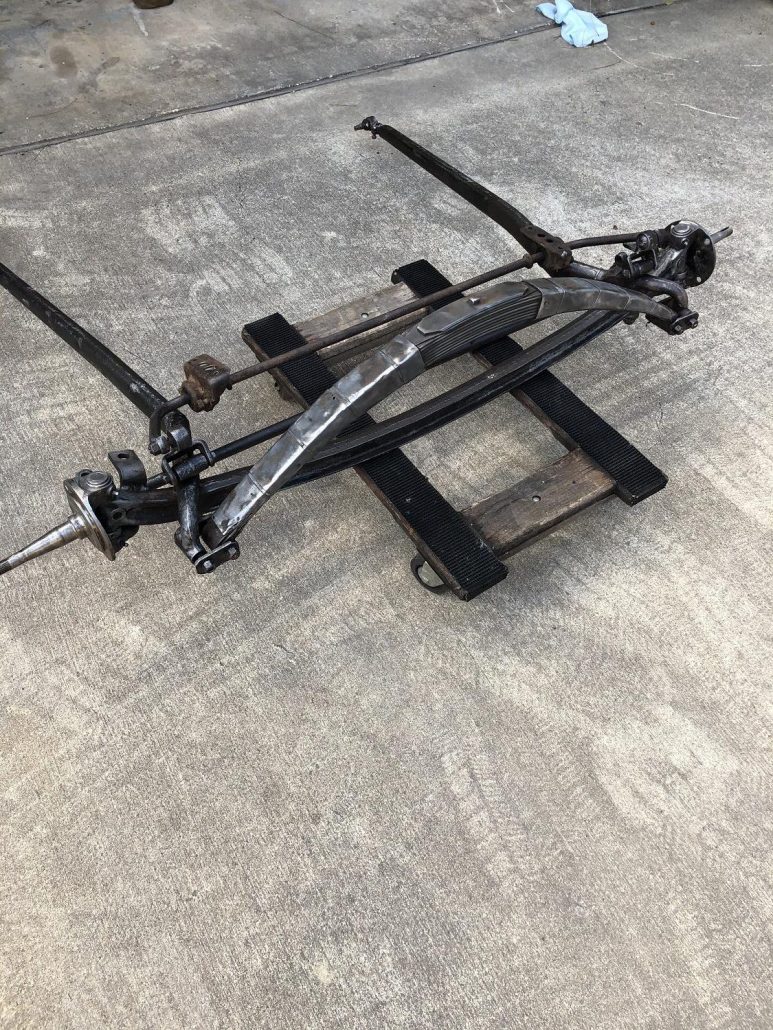 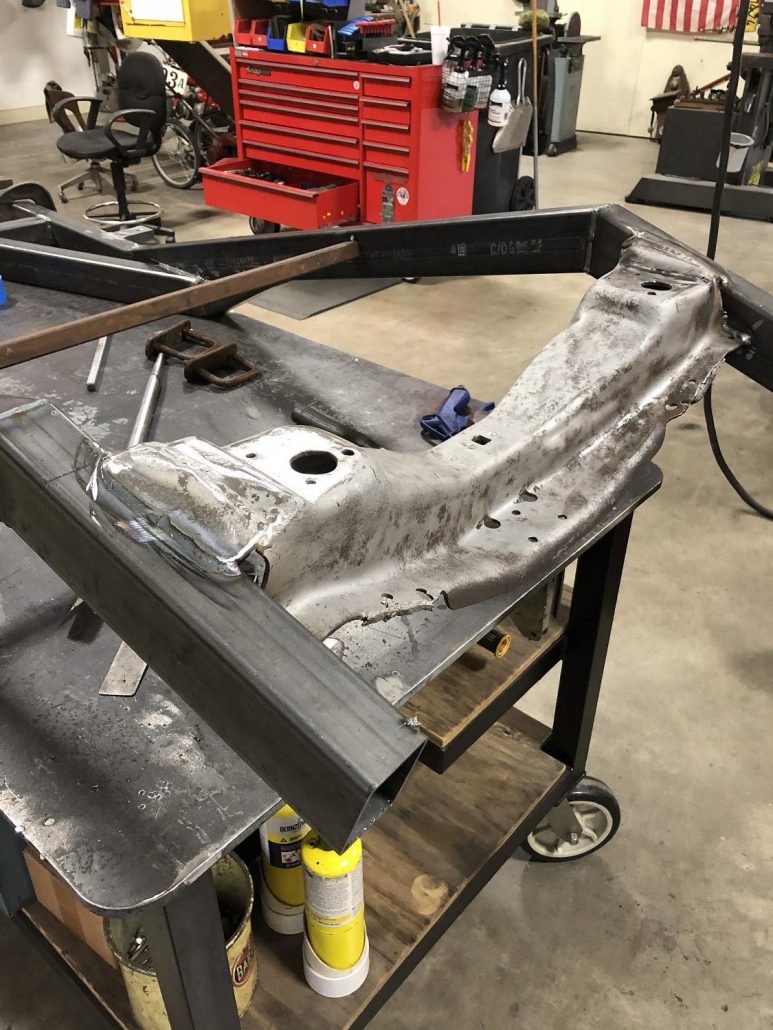 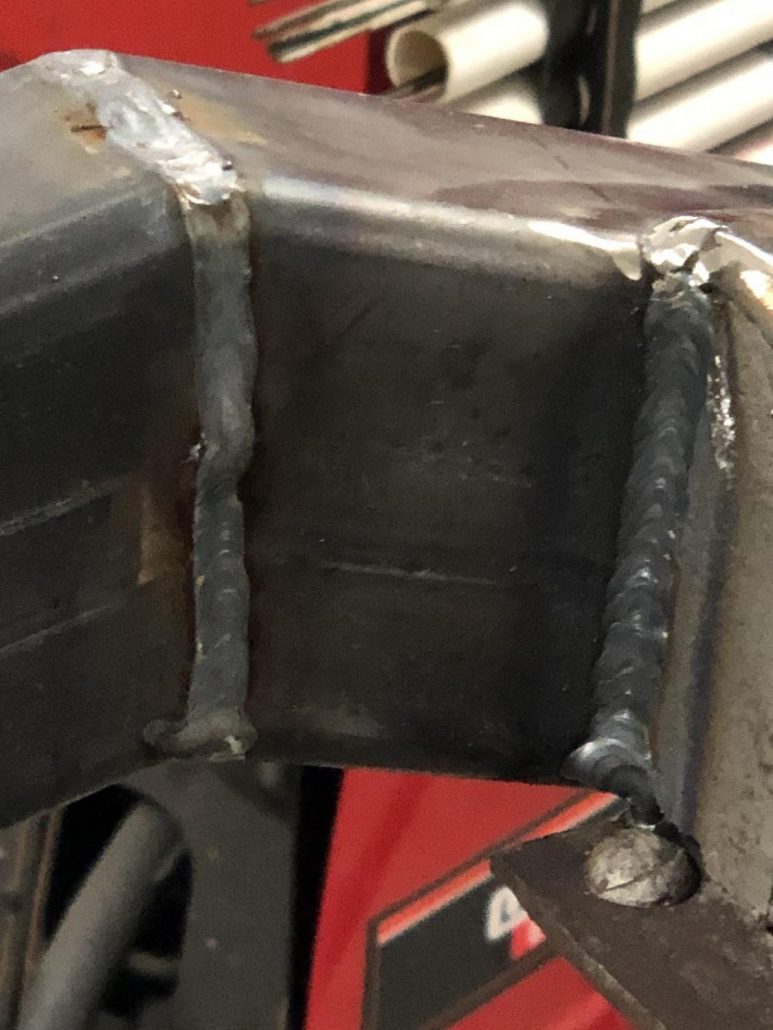 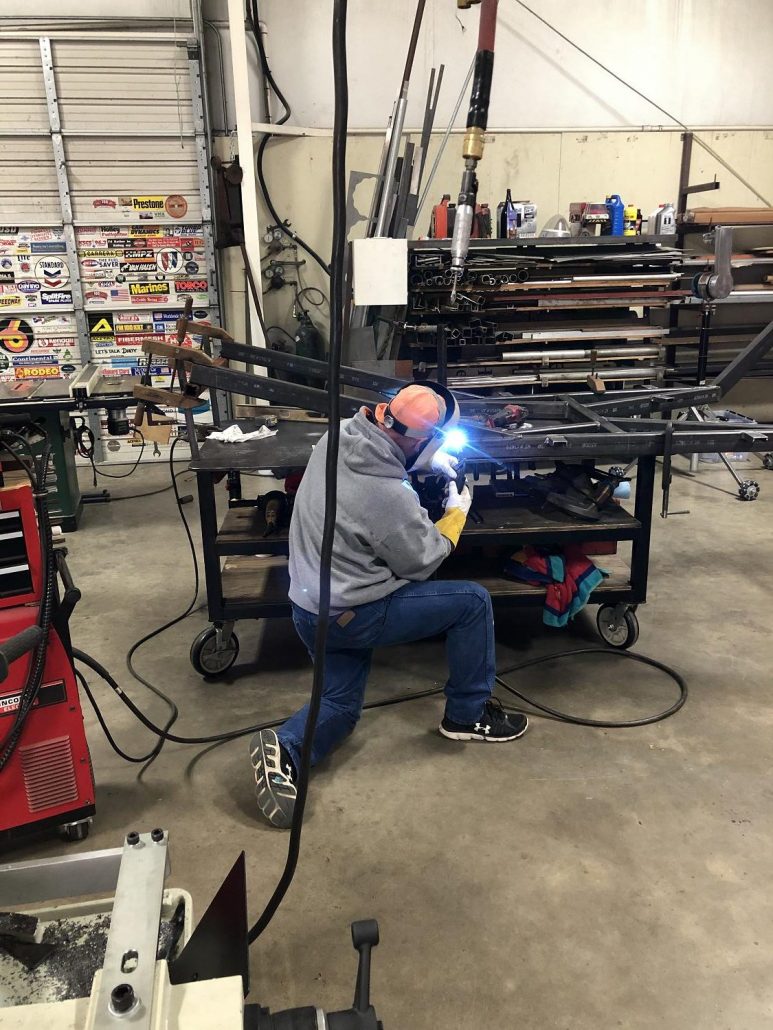 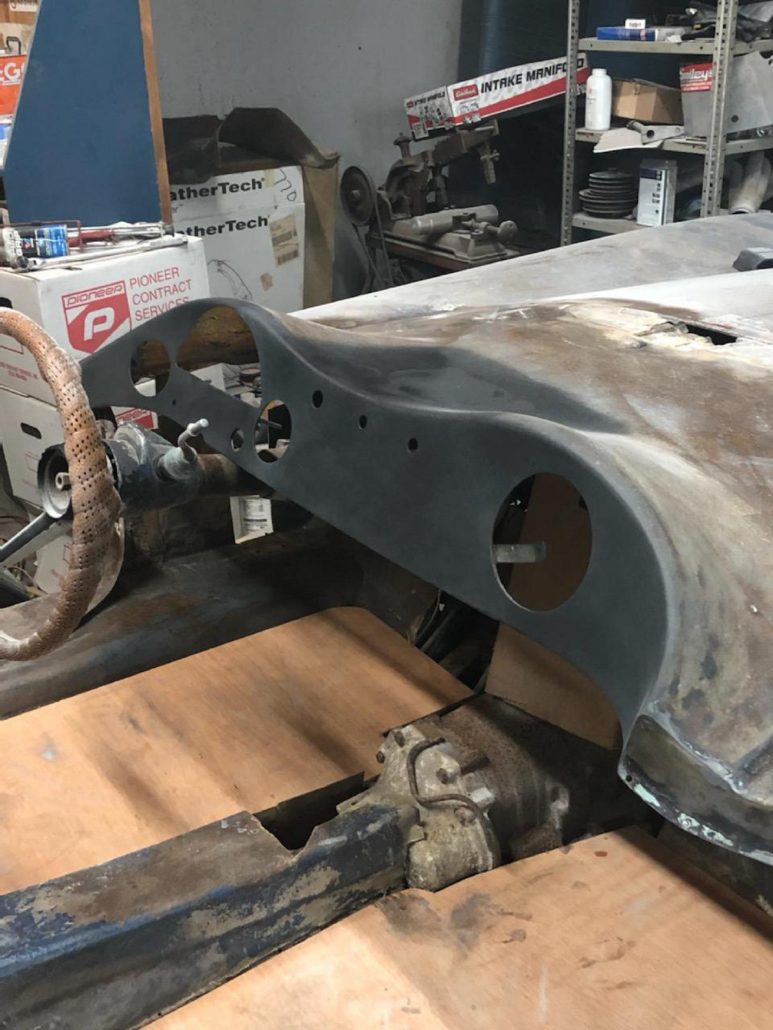 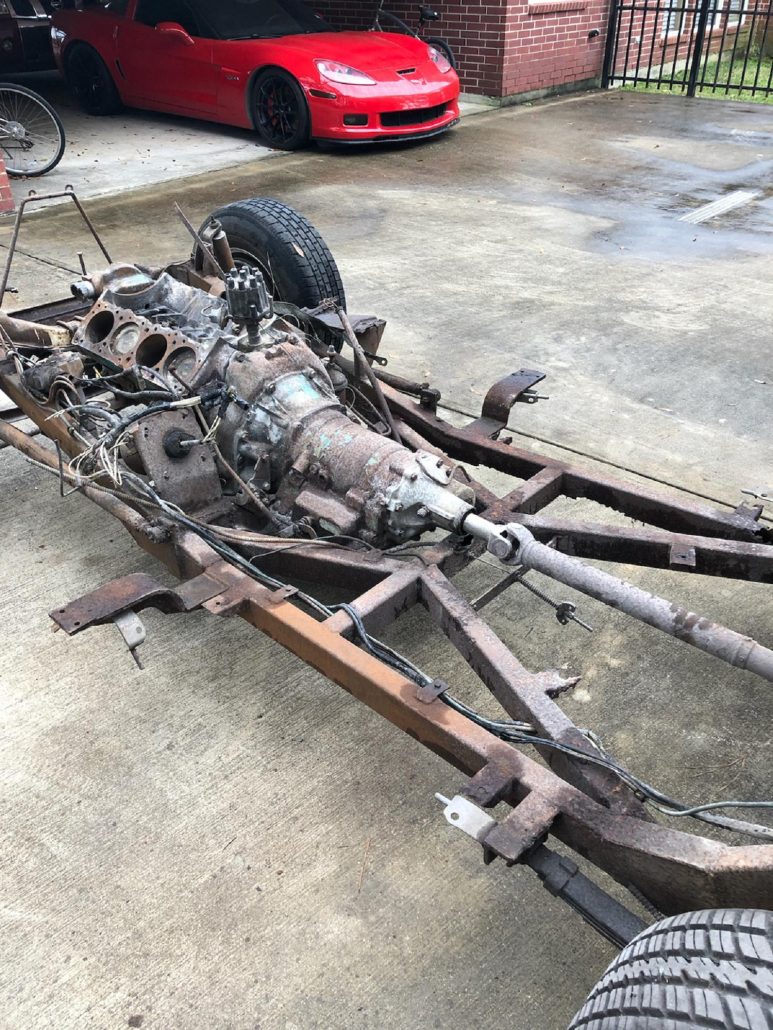 Great thanks to Brian Meyer for sending in an update and we look forward to sharing more progress as he and his team continue their work.  They’ve assured me that the car restoration will be completed before the end of the year – sounds like my kind of team.  Go get ’em guys!  I’ve included additional restoration below for those of you who want to dig into the details and check out some of their challenges.  As you look thru the photos you can tell that we found the right owners for this Wildfire.