I like to put names, faces, locations – all of it together.  Just like the first Glasspar location we’re discussing today.

I was fortunate enough to get to know Bill Tritt and discuss his memories of Glasspar as part of our project to document early fiberglass sports cars.  During one of our talks, we focused on locations or “sites” where Glasspar built their boats, cars and more.  What I learned helped me put the pieces and photos together for each Glasspar locations.

For a moment in time in late 1951, Glasspar had three sites for their sports car body (G2) operations.  Not all were up and running simultaneously, and that’s what we’ll explore in the next few weeks in each of our stories on Glasspar sites.  And away we go. 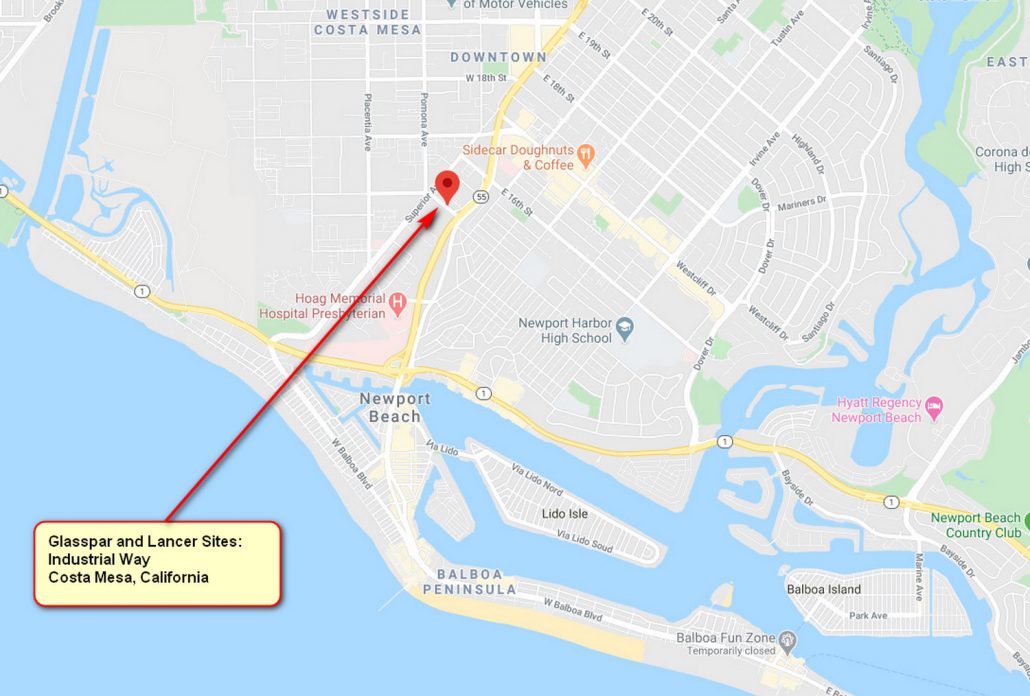 Life magazine visited Glasspar in late 1951 and took photos for a story that ultimately ran in February, 1952.

J.R. Eyerman was the photographer and like any “photo shoot”, he took more than needed.  Several years ago these photos were shared online as part of Life Magazine images and this has helped us greatly determine timing and locations for some of Glasspar’s most important projects.  But that’s not all the information we were able to obtain.

Thanks to the kind efforts of Dennis Gerdes whose father was Foreman of Glasspar – and the Tritt family – we were able to scan additional photos that helped us determine projects, locations and more.  And finally, Rick D’Louhy and I visited California on one of our trips in June, 2013 and did some “scouting” in Costa Mesa.  Boy did we come home with a prize 🙂

I asked Bill Tritt if he and his family had any photos of their first site on Industrial Way in Costa Mesa.  Sadly he didn’t.  But the memories he shared were important.  Bill had started Glasspar in the late 1940s and his first shop was on Industrial Way.  Next to his shop was another boat builder working in fiberglass – Eric Irwin.  They became friends and both ultimate built boats and cars from fiberglass – each their own companies.  Later, they were recognized highly enough in the early 1950’s for their efforts that for a time, Costa Mesa was called “Little Detroit” by many in the automotive industry.

Bill shared that his building was behind Eric’s building, and that Eric’s building was a bit unusual – it was long and narrow.  Not square in shape.  In 2013, Rick D’Louhy and I paid a visit to Industrial Way in Costa Mesa.  We visited several business locations to determine if anyone still had history or memories on Glasspar. 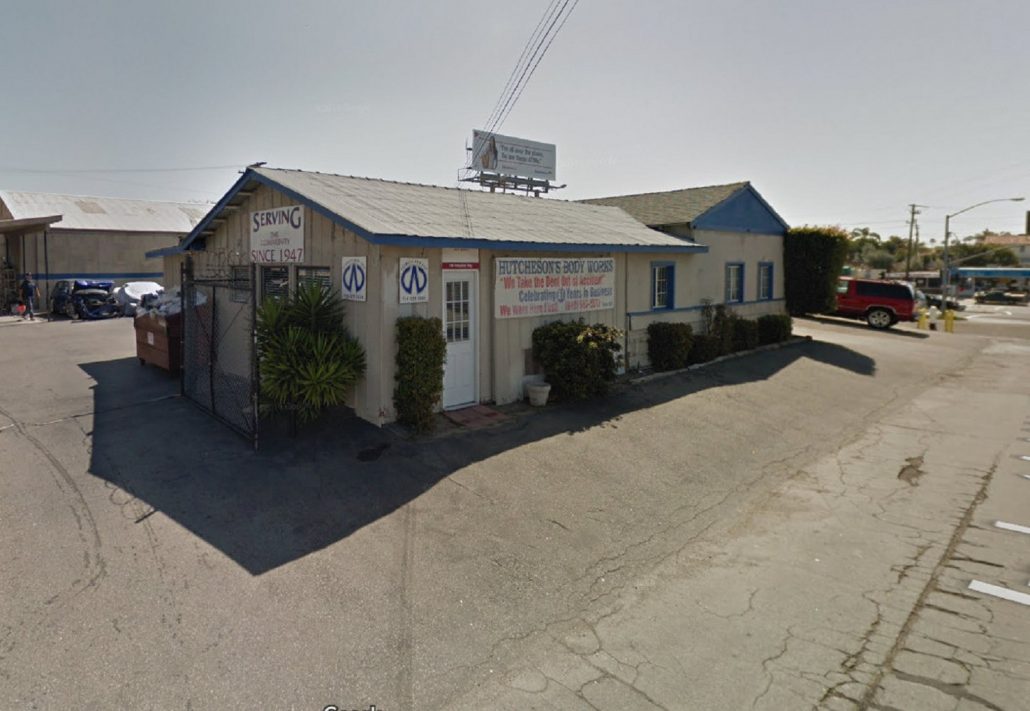 One of the businesses still there was “Hutcheson’s Body Works.”  Their slogan was “We Take the Dent Out of Accident” and they started back in 1947.  It’s interesting that they were still there because articles about Glasspar back in the early 1950s mention “Hutcheson’s” more than once.  We’ll discuss their relationship here in future stories.

In the 1950s (and maybe before) Hutcheson’s was located very close to where Glasspar would have been located.  When we walked in and introduced ourselves, Rick and I couldn’t believe what we found.  Hanging on the wall in plain sight were aerial shots from 1947 and 1958 of Industrial Way.  Both photos included what we believed to be the Glasspar and Lancer buildings.  Let’s have a look. 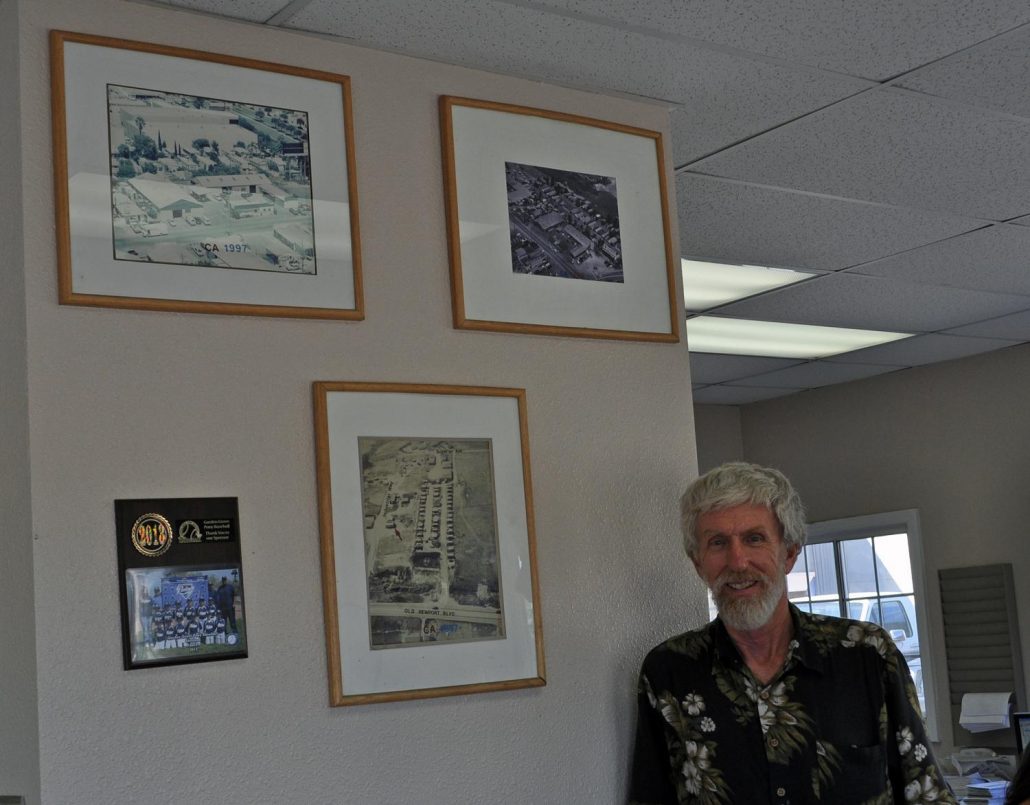 Here Rick D’Louhy is posing next to the photos we found that day. The folks at Hutchesons were kind enough to let us take the photos down and do close-up work with each image.

The photo from 1947 showed 2 buildings exactly as Bill Tritt described them.  I’ve cropped and magnified the two buildings in the image below and you can clearly see a boat being built next to one building which we presume is the Glasspar building.  In front of this building and near the street is Eric Irwin’s building – exactly as described by Tritt.  See below. 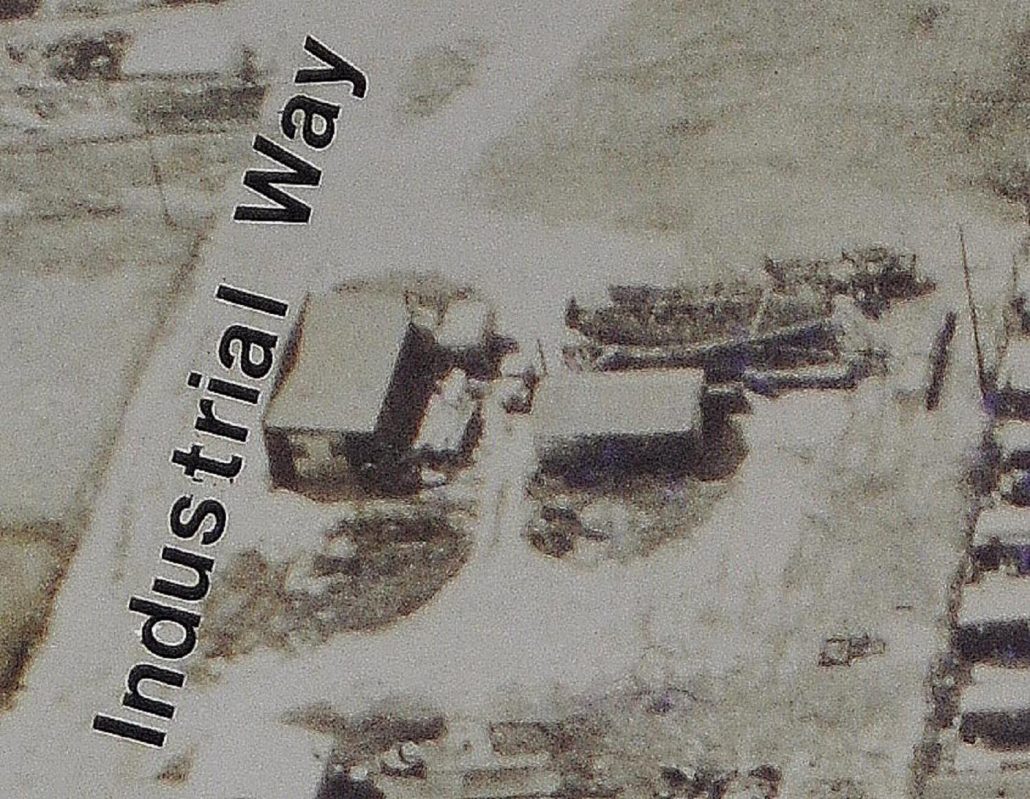 In the 1958 photo below, Glasspar and Irwin have left these buildings (both were no longer producing cars and bodies) and you can see both buildings a bit more clearly now too. 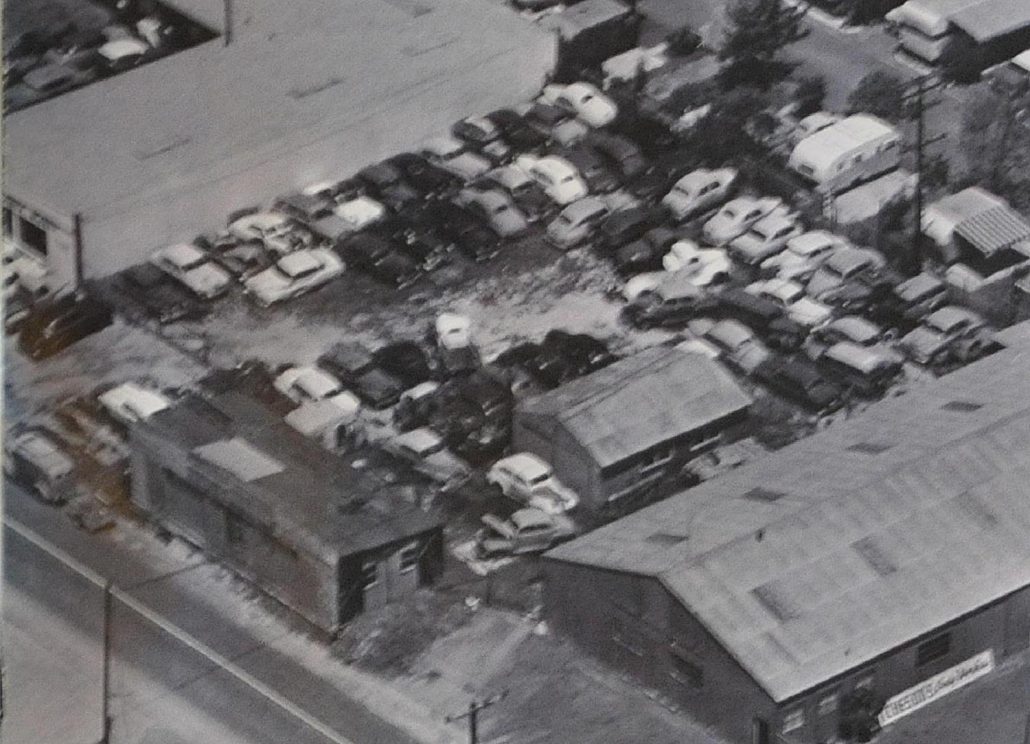 Some of the photos that weren’t used by Life Magazine showed Bill Tritt working on the plaster buck for the Glasspar G2.  In talking to Matt and Greg Tritt about these photos, we identified that they came from site 1 of Glasspar on Industrial Way.  Further confirmation is seen in photos below with the matching windows behind the Glasspar buck and in the aerial photography above.  Indeed it looked like we found and now had photos of Glasspar’s first site. 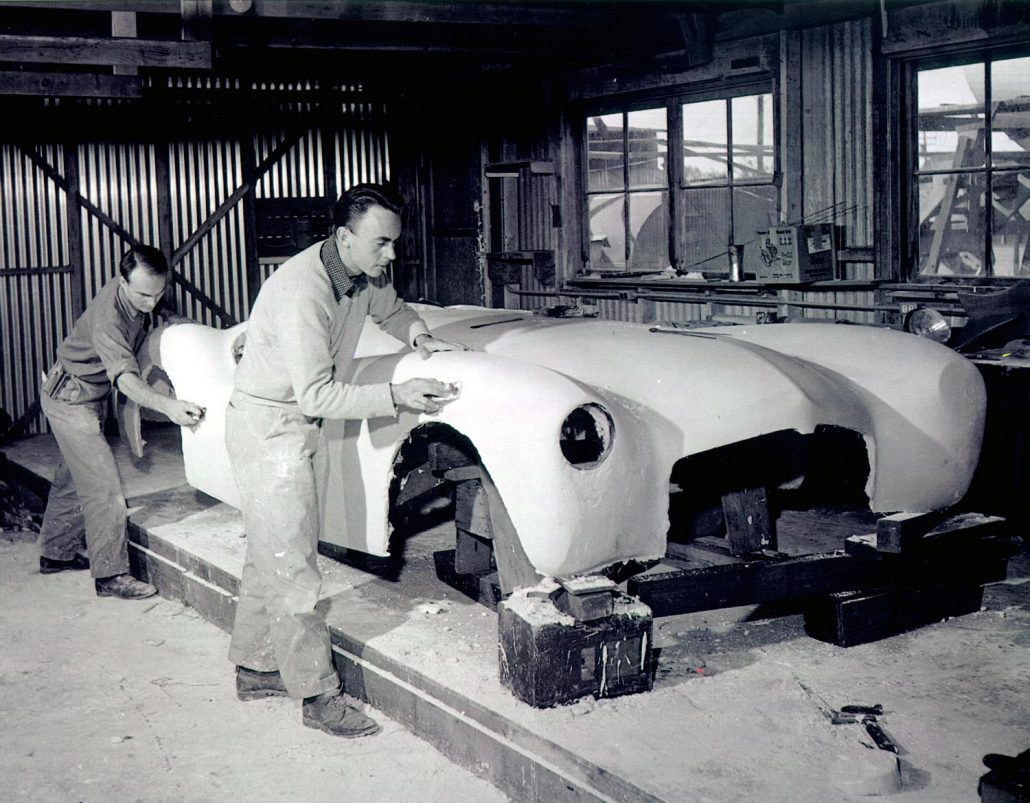 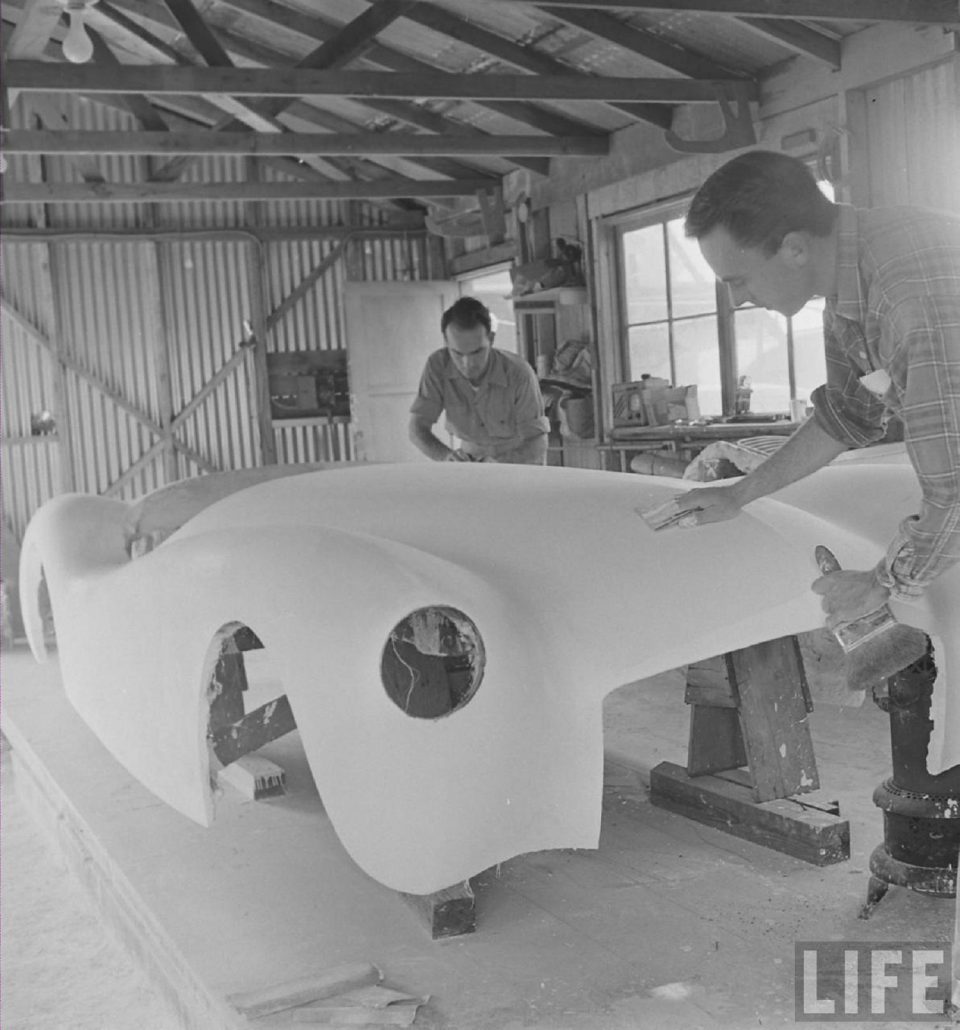 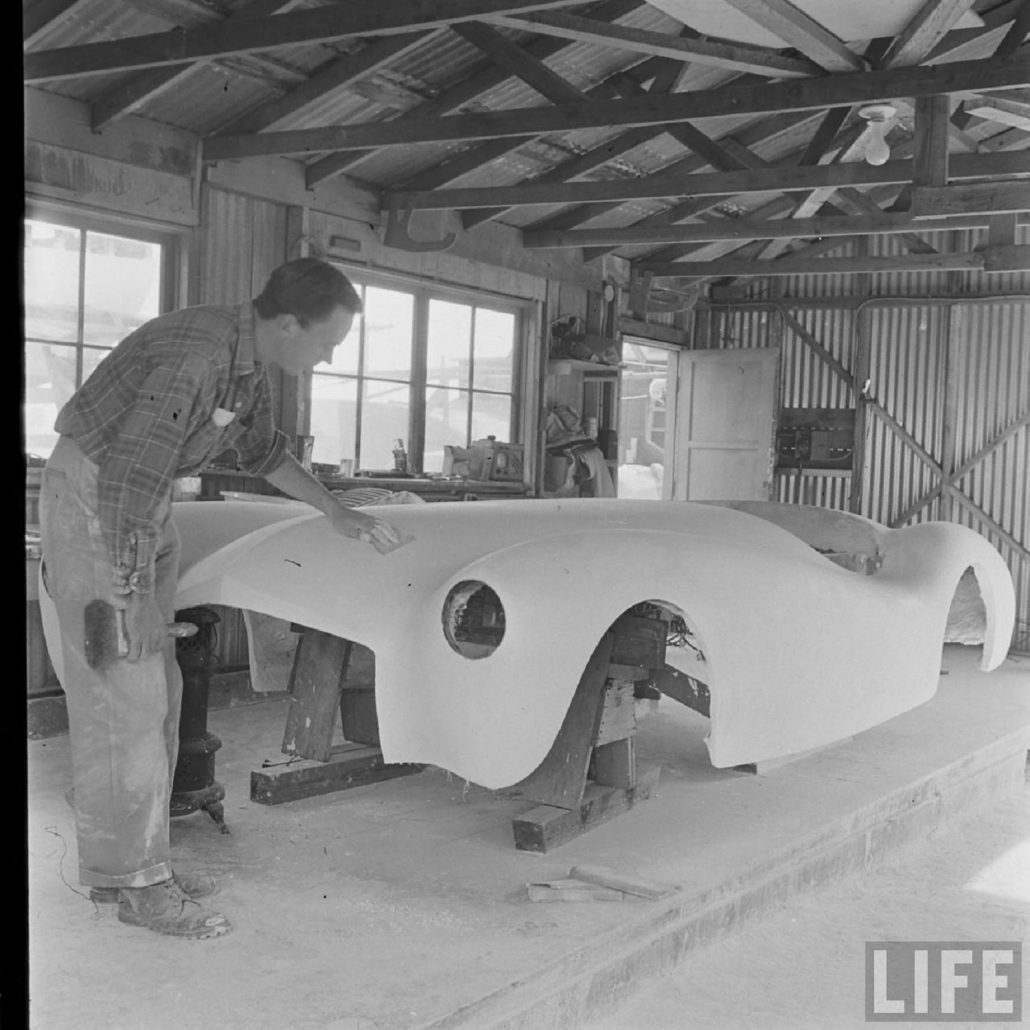 Rick and I visited Industrial Way just in time in 2013.  I’ll explain in a moment.  We started to look in the vicinity of where the Glasspar and Lancer buildings should be but sadly nothing was there – at least we thought.  Next door was a repair shop for boats and boat motors in the location where the buildings had been.  We went in and introduced ourselves and explained we were researching the Glasspar boat company and two buildings that had been on their property. 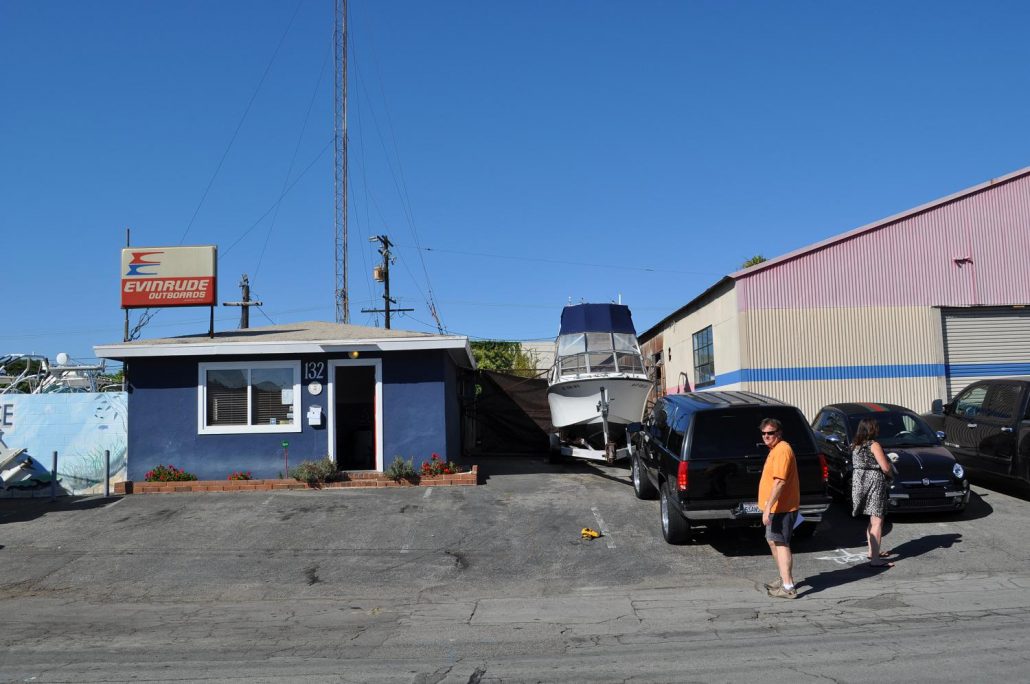 We shared with them the story and photos of the buildings and then they asked us if we wanted to go behind their office and have a look.  What we found was the surprise of the visit.  We had located Glasspar’s original location.  It took us a while to check out what we had found but it matched as follows:

Let’s check out some photos from that day. 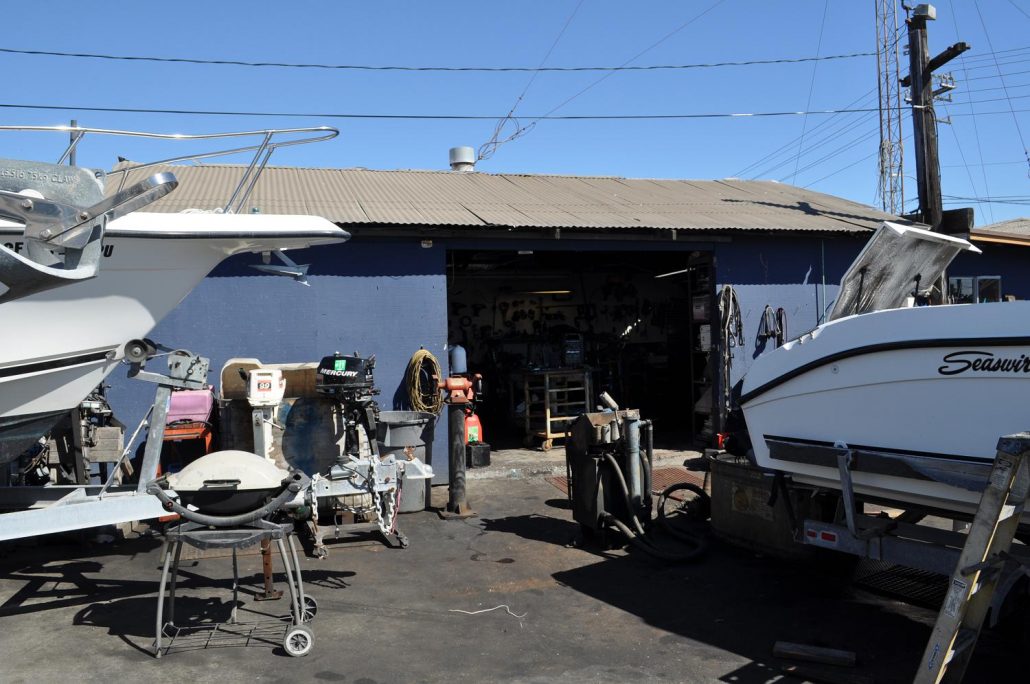 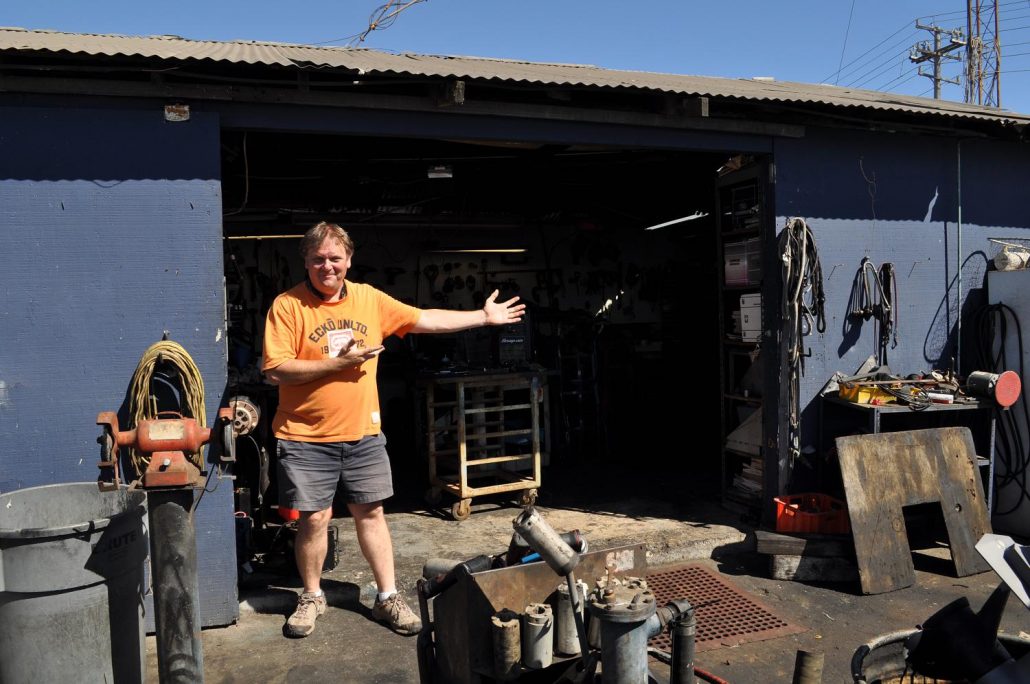 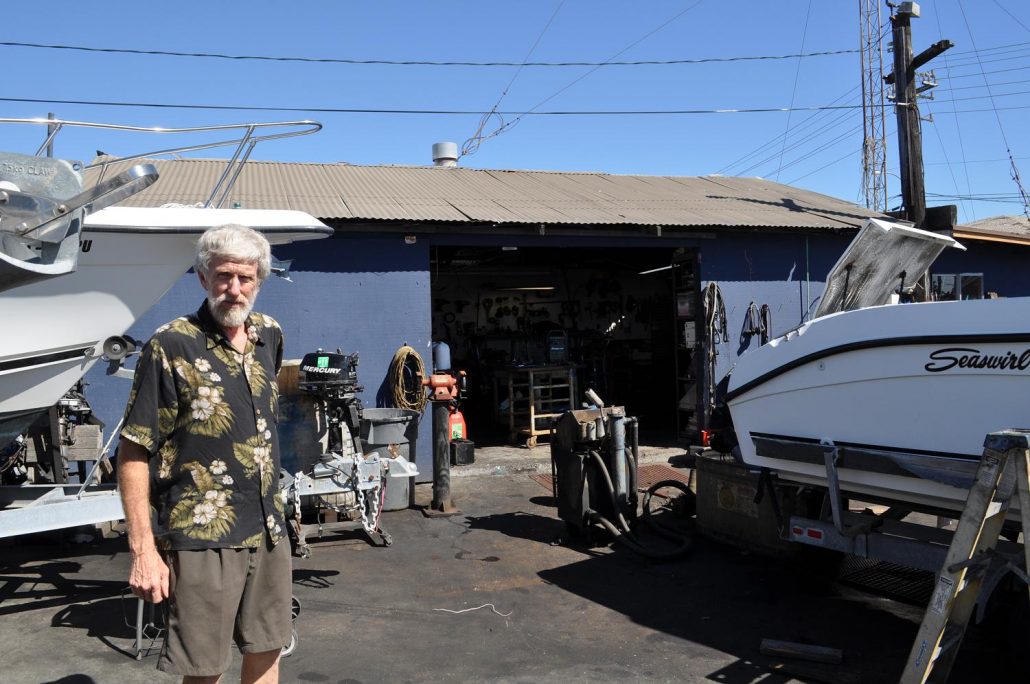 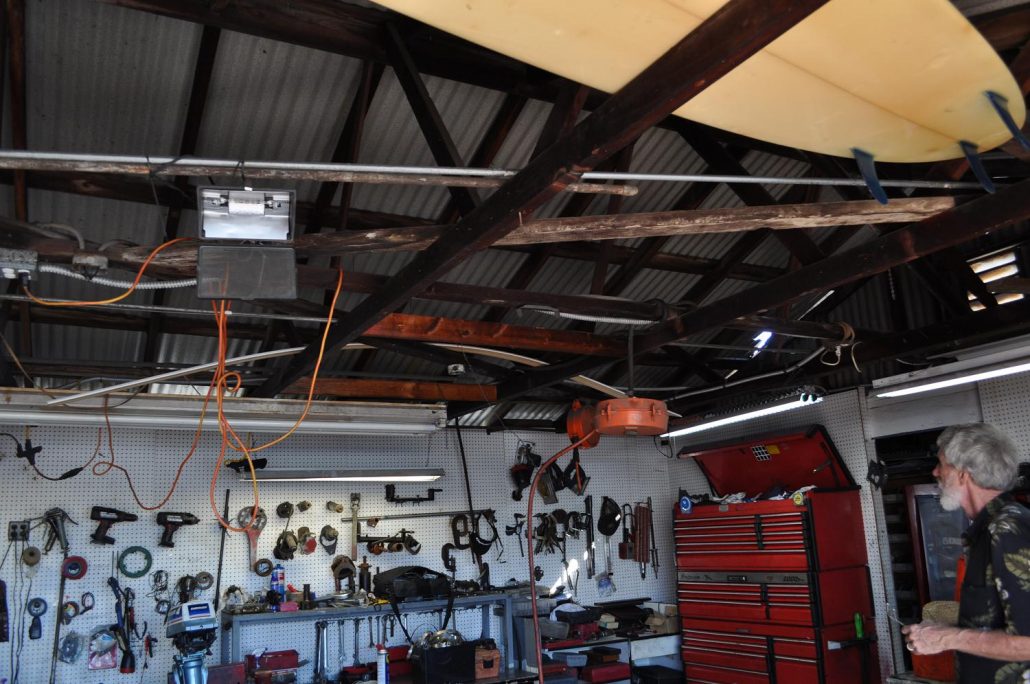 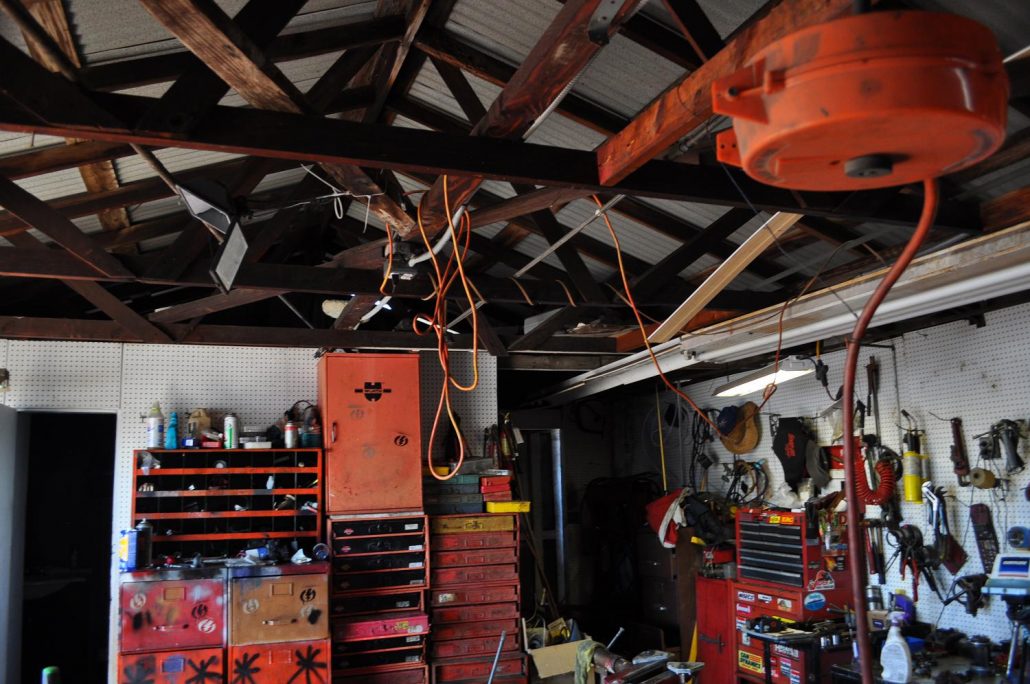 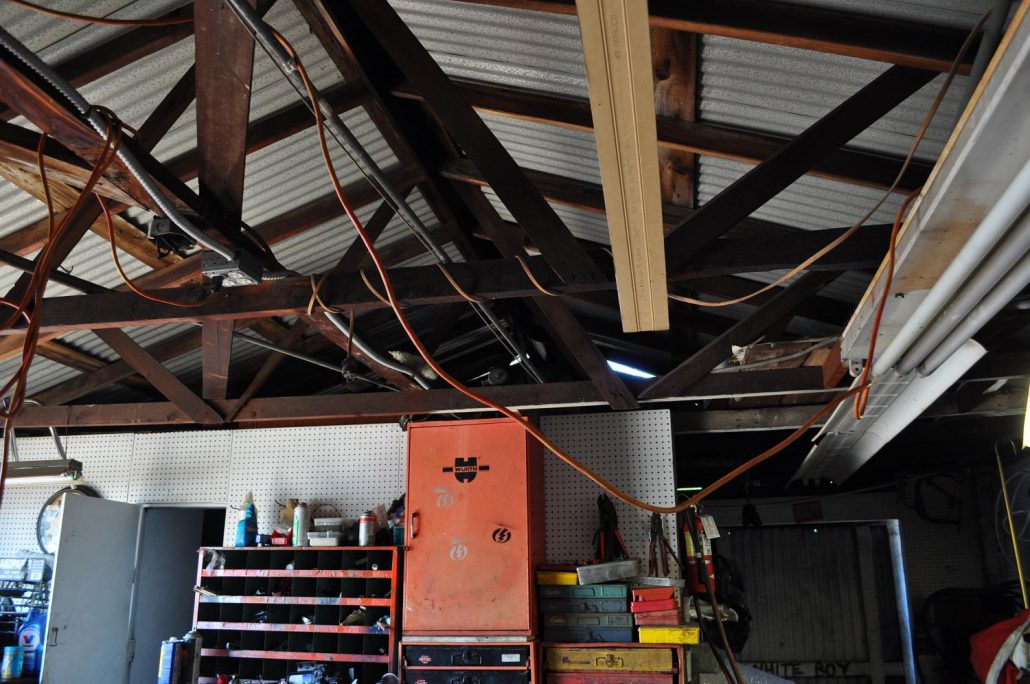 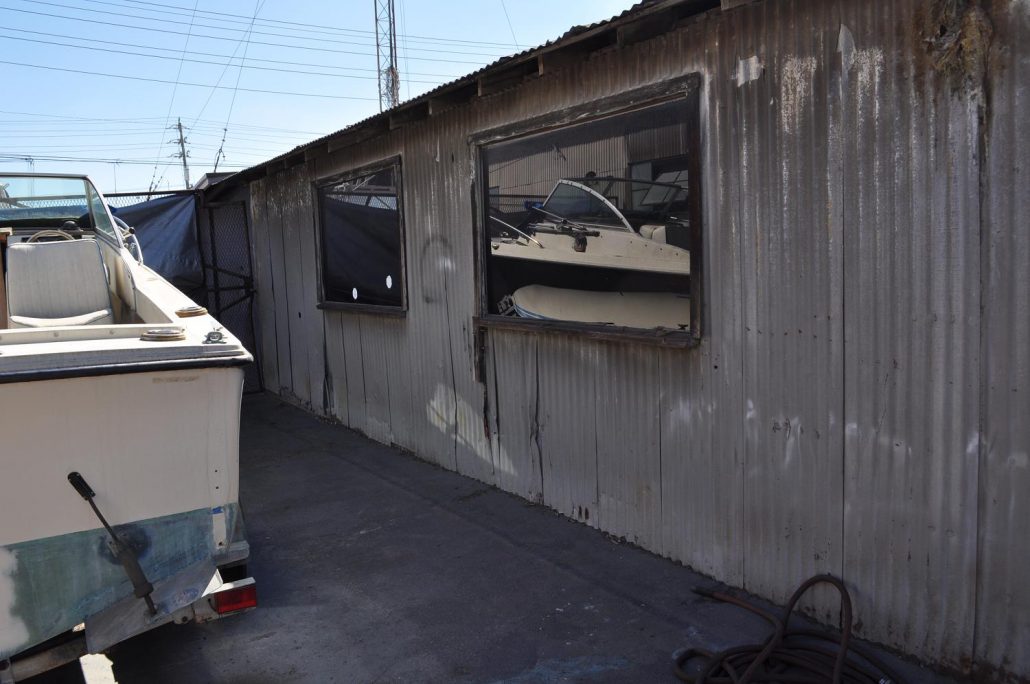 Here Are The Windows – Shown with Bill Tritt from the inside in the 1951 Life Magazine photos. These were boarded up from the inside but the outside retained the correct shape and size. 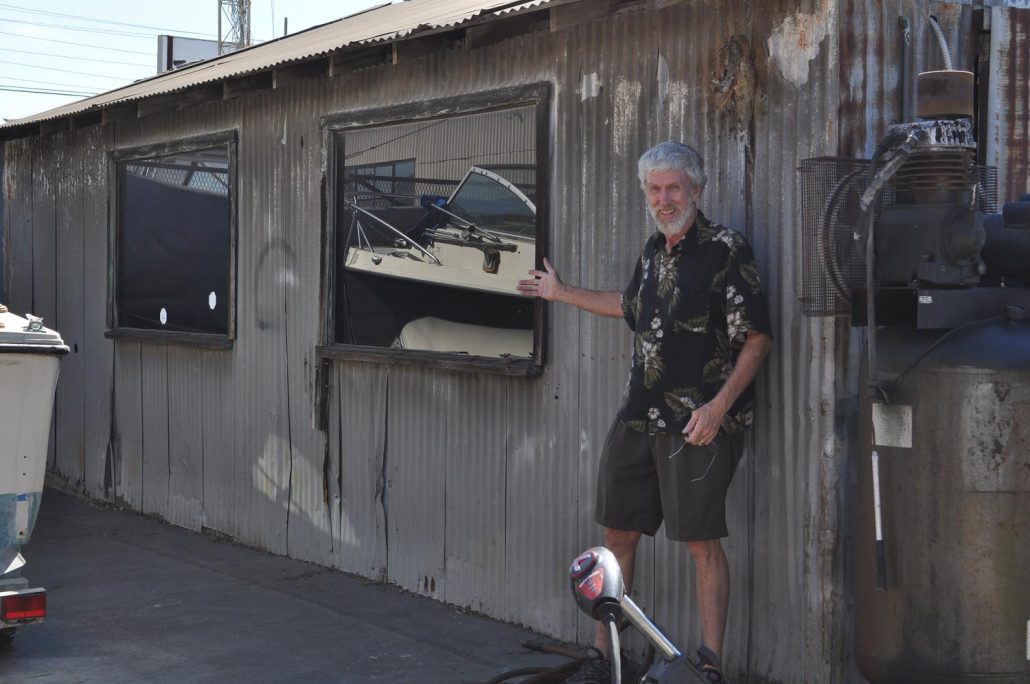 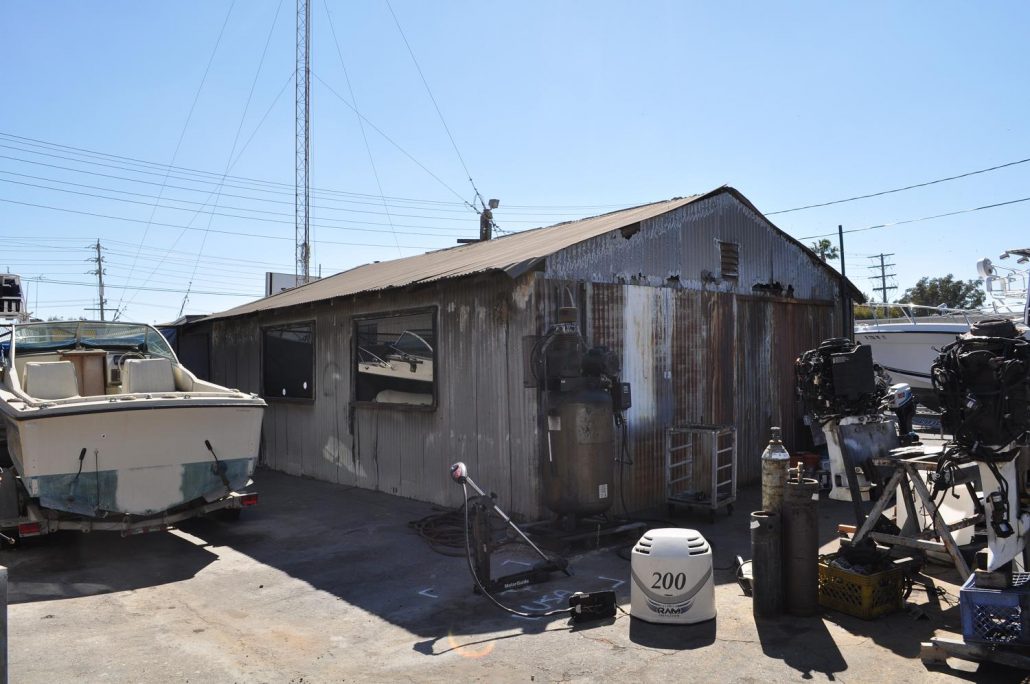 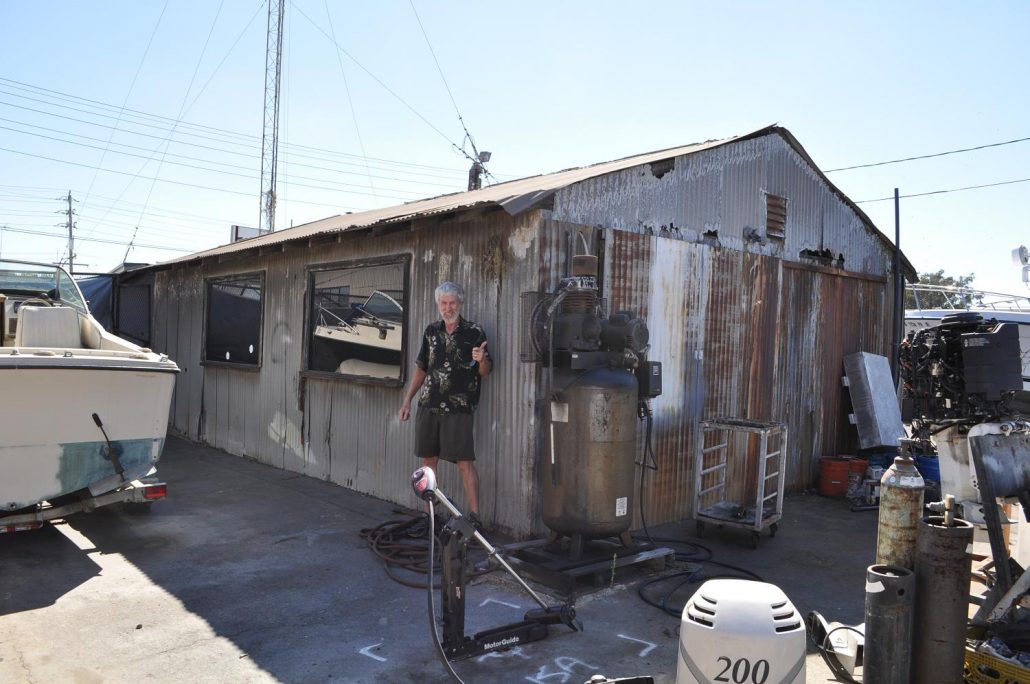 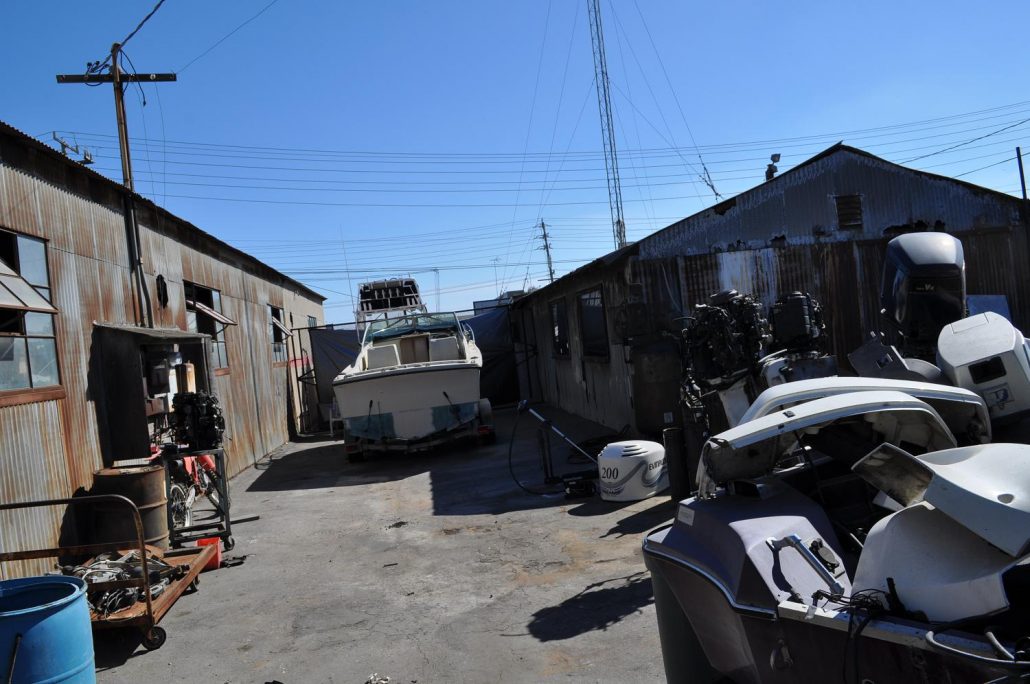 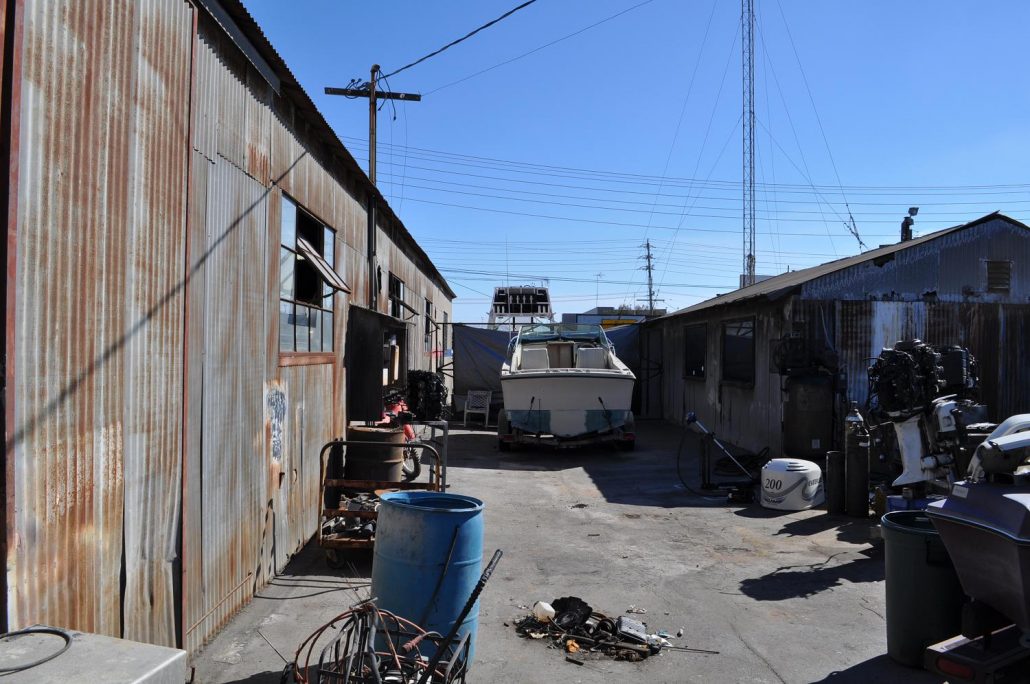 Guess What Was On The Property Behind The Glasspar Building

But the piece d’ resistance for the day was finding a Glasspar boat on the property.  It was in for repair but still the same – the boat had finally found its way home to where Glasspar was born.  The folks in the photos below are the family who owned the property – the Williams family.  They operated Advanced Marine Service and gave us access to the property that day.  Thanks Williams family 🙂 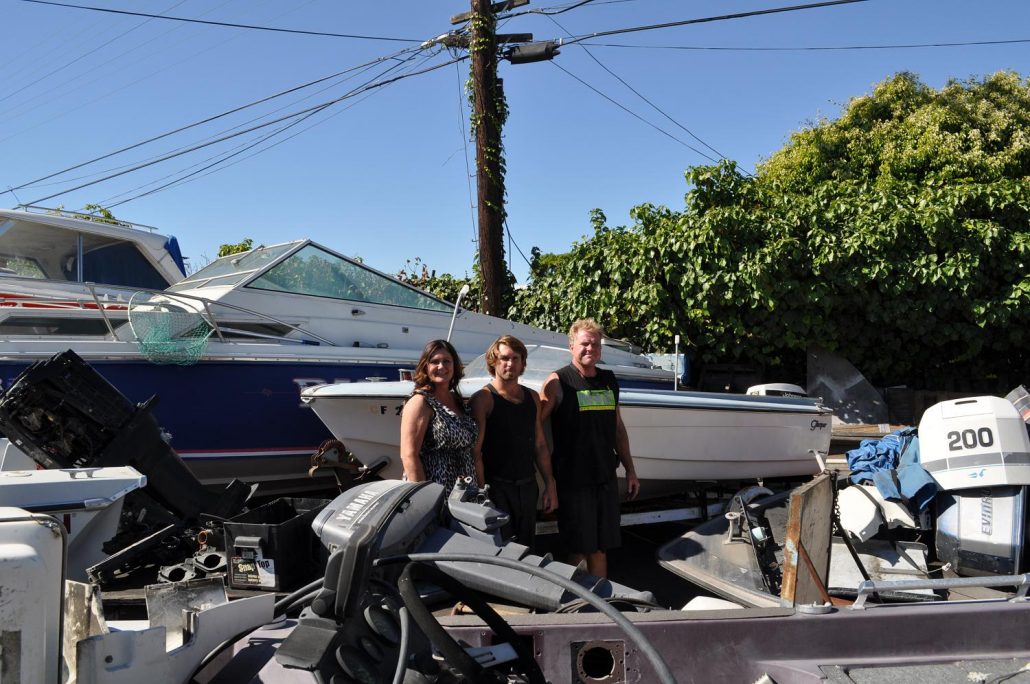 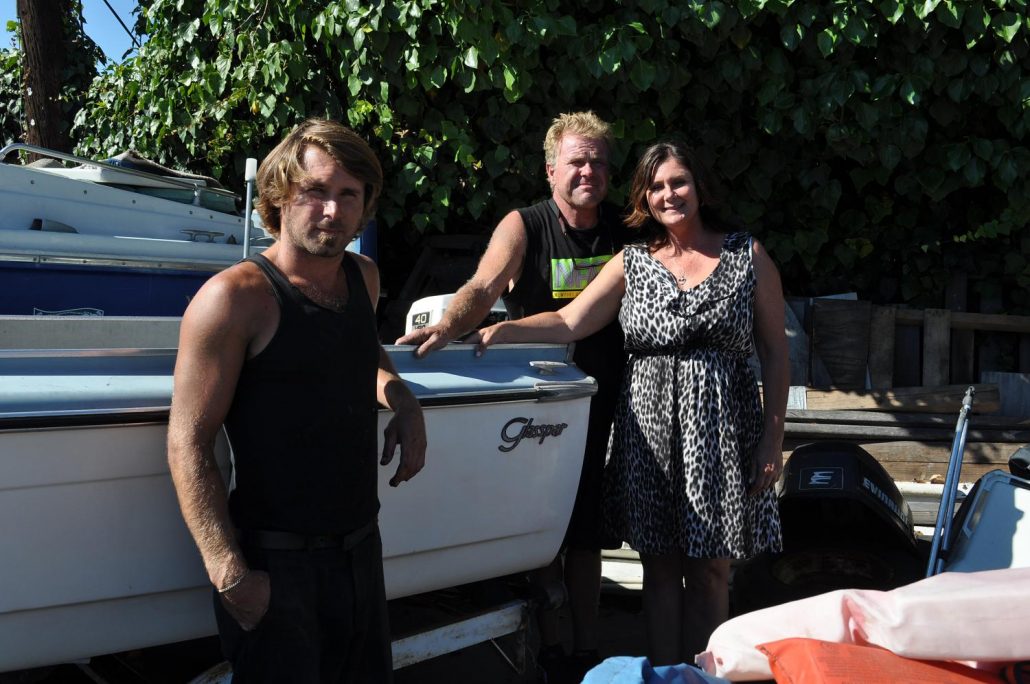 We Arrived in The Nick of Time

Our visit to Costa Mesa was in June, 2013.  In the photo below from Google Maps you can see Hutchesons, another large building (Lancer photos were taken there which we’ll discuss in a future story) and the Marine Building with the antenna where Glasspar was located: 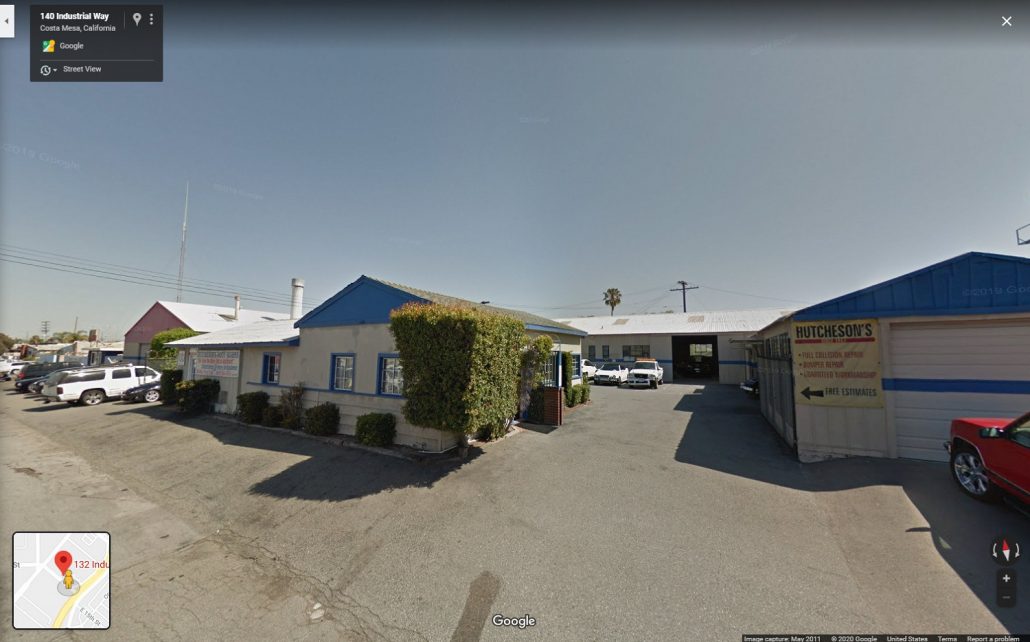 Just over a year later in October, 2014 it had completely changed.  The world had moved on and the site where Bill Tritt and Eric Irwin built the first fiberglass sports cars in the world was gone. 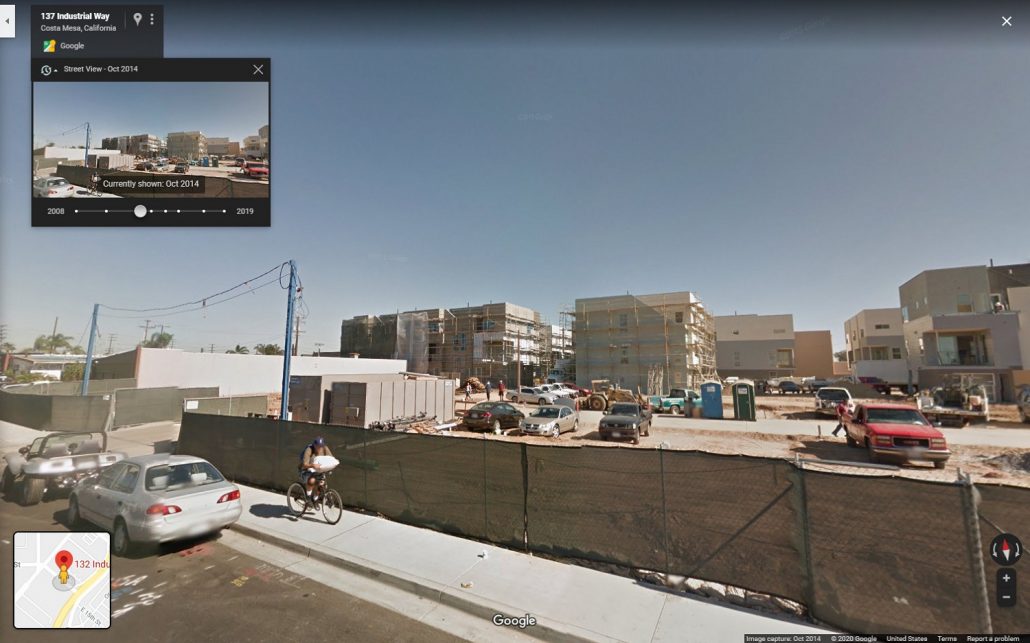 Bill Tritt and Eric Irwin were friends since the 1940s.  Both created fiberglass boats and sports cars.  They built the first 100″ wheelbase or longer composite bodied sports cars built in the world.  Both debuted their cars at the 1951 Petersen Motorama at the Pan Pacific Auditorium.  But you might ask the question…

You’ll have to stay tuned to another upcoming story here at Undiscovered Classics.