How much better of a story can you get?

Dick and Jeannette Foster have now been married over 60 years,  Dick built this car in the mid 1950s.  He’s one of our original Woodill Wildfire builders and owners and it’s always been special to spend time with him and learn from one of the builders who built – and kept – his car from back in the day.

When Dick finished his Wildfire, he won many of the shows he took his car to in the 1950s.  Later, given how special and powerful his second engine turned out to be, he drag raced the Wildfire too.  I met him in 2009 along with friend and fellow Woodill Wildfire owner Stan Fowler and between us we convinced him that it would be exciting to restore and drive the Wildfire again.  And boy was it ever!  For Dick and all of us watching too.

Restoration took a few years and we debuted the car at the 2011 Milwaukee Masterpiece Concours d’Elegance.  It was a beautifully finished car down to the restoration of the original Dayton wire wheels – a rare wheel to use back then and now. 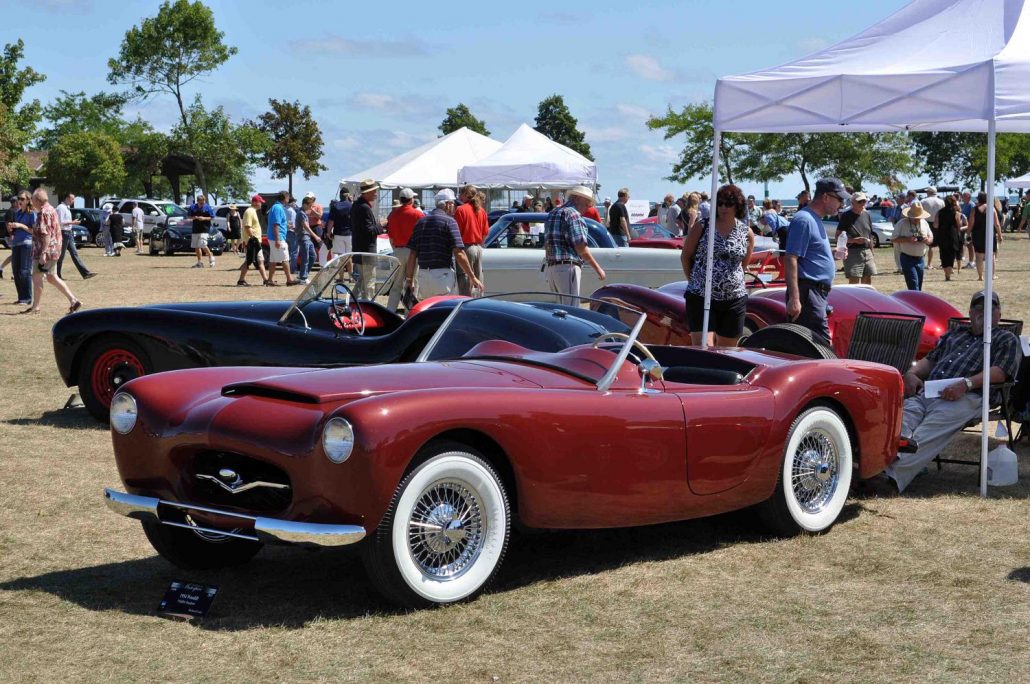 The next show Dick brought his car to was in 2012 at the Salisbury Concours d’Elegance in Des Moines, Iowa.  In the photo below, we brought in a 1954 Kaiser Darrin that was also from the show.  Back in 1953, these were the two cars (Darrin and Woodill) who were competing to become the next sports car – Woodill’s Wildfire for Willys and Darrin’s Sports Car for Kaiser.  When Kaiser Corporation bought Willys in Toledo, Ohio, they committed to the Darrin sports car and the Kaiser Darrin was born.  Woodill took a different path and the rest is history. 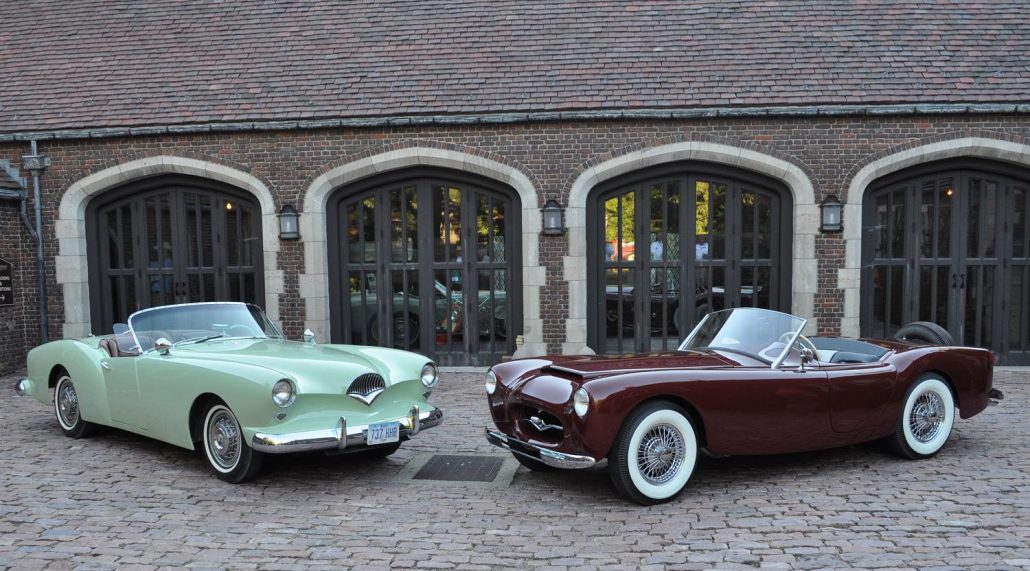 Here a 1954 Kaiser Darrin and a 1954 Woodill Wildfire Sit Side By Side at the 2012 Salisbury Concours d’Elegance. Such beautiful cars in a splendid setting. 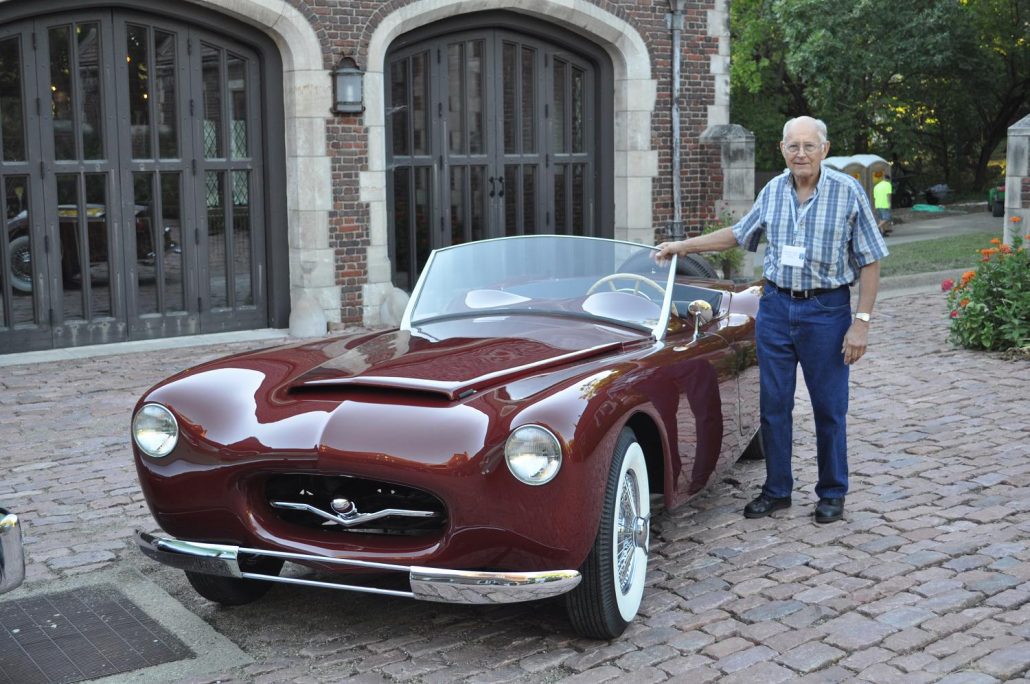 Dick Foster With His Woodill Wildfire 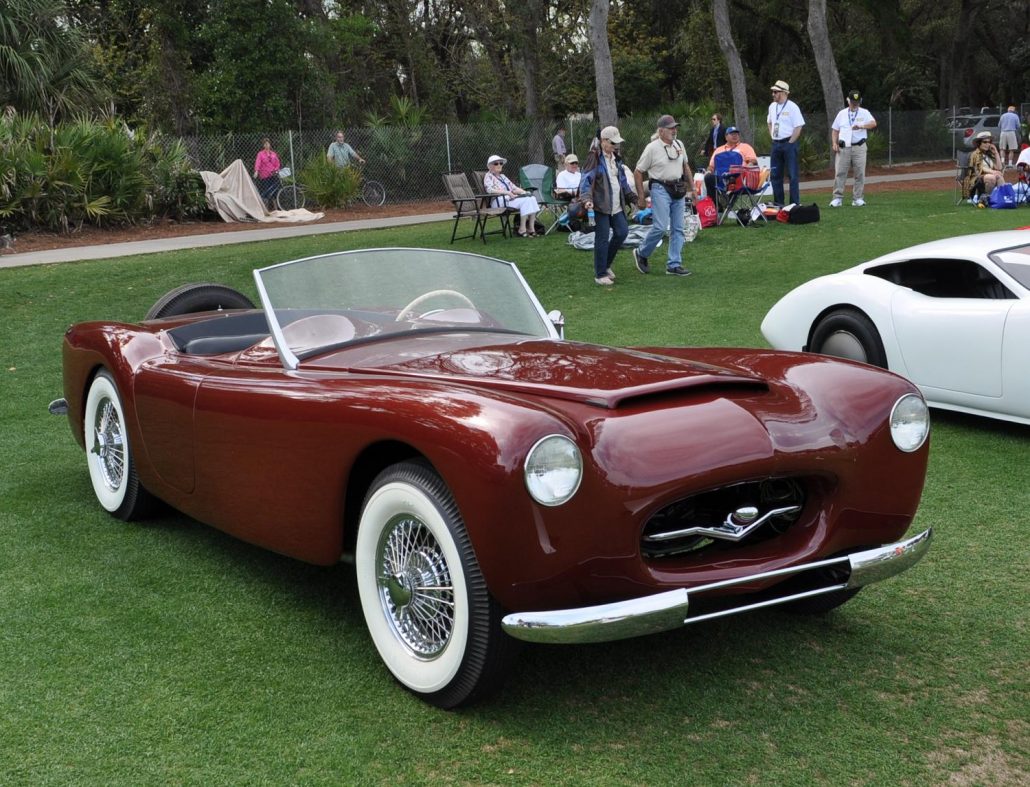 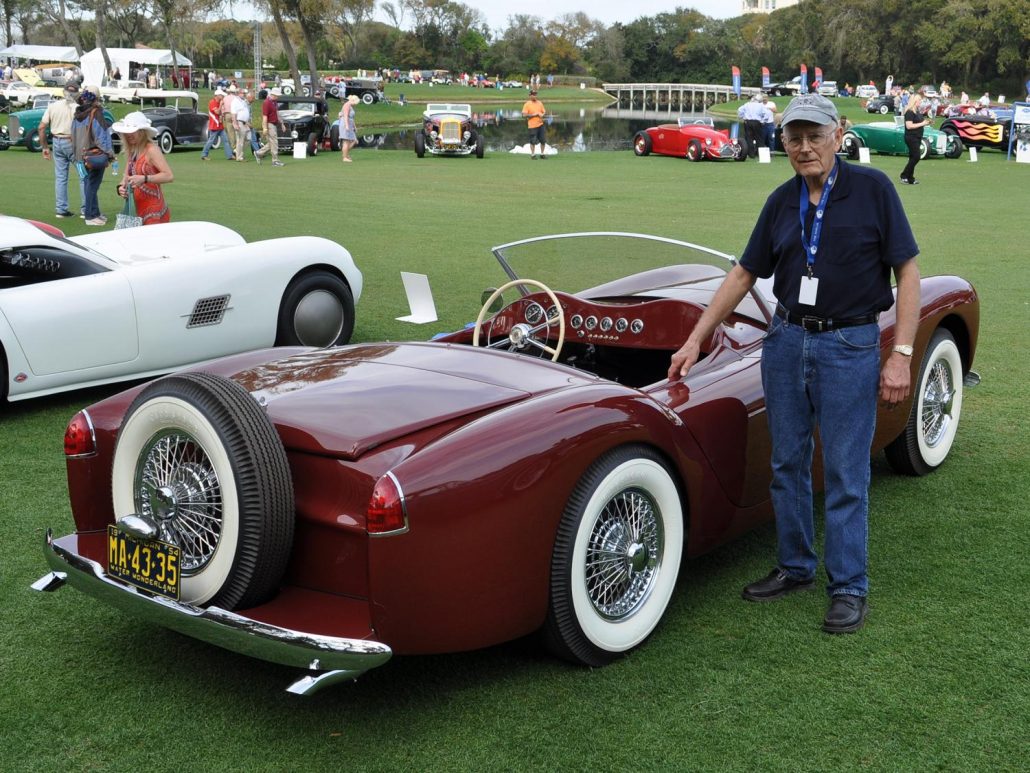 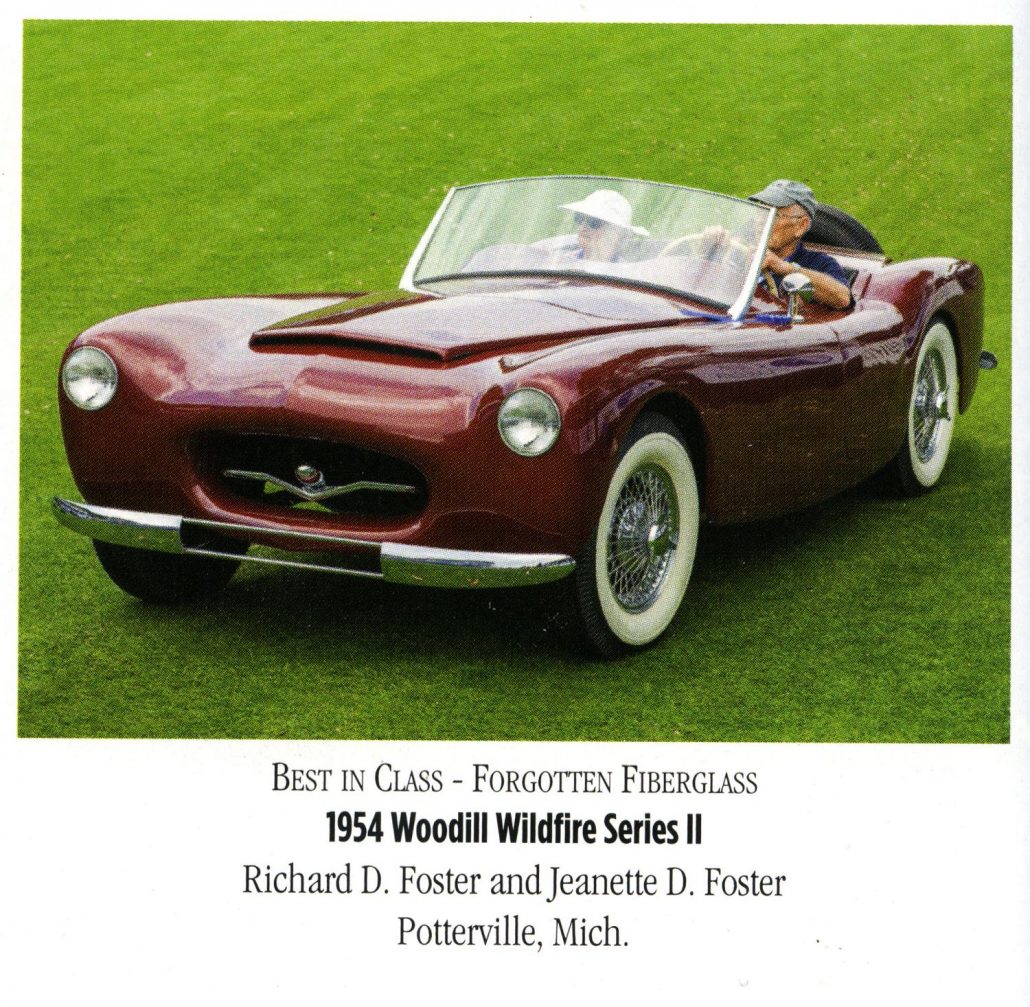 When the Foster family put their Wildfire for sale earlier this year, Hemmings Motor News classified this car as “Find of the Day” which is quite an honor for such a large magazine and so many special cars.  Let’s take a look at the information and photos that were shared as part of the Hemmings ad. 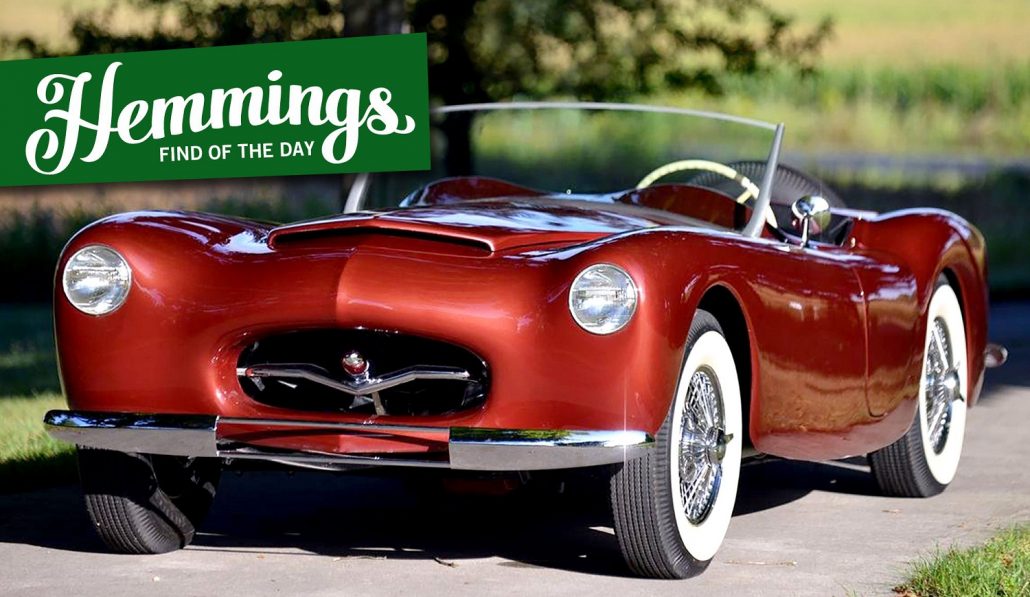 What’s a Woodill Wildfire? In short it’s a Willys-based sports car, and only a few were made for production with more built from kits. For more history, read this story from Hemmings Motor News. Or read on to learn more about this specific 1954 Woodill Wildfire for sale on Hemmings.com. From the seller’s description: 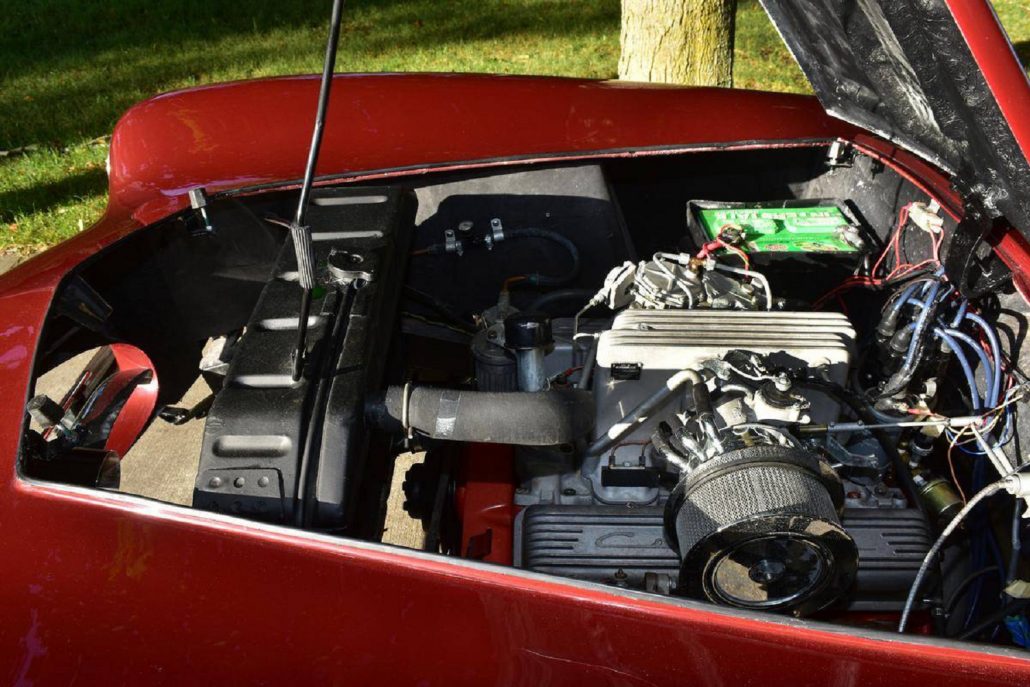 Out of 300 fiberglass bodied Wildfire’s built from 1953 through 1956 approximately 25 survive today. This is a frame-off restored original owner-builder example of a 50’s hot rod sports car, winning its class in the 1956 Detroit Autorama and the Amelia Island Concours in 2015.  This car runs, drives and looks excellent.

What really makes this car special is the engine. The original Ford flathead was swapped out in 1957 for a new Chevrolet fuel injected 283 per authorization from Maury Rose, head of Chevy Racing Division at the time. This engine made this car seriously fast. In a car weighing 2,200 lbs., the 283 hp with the rear end in high range would go to 90 in first gear, 120 in second. This car was drag raced from 1957-59 in “class A gas open” mostly against Corvettes, big block rod, T-birds and never lost. 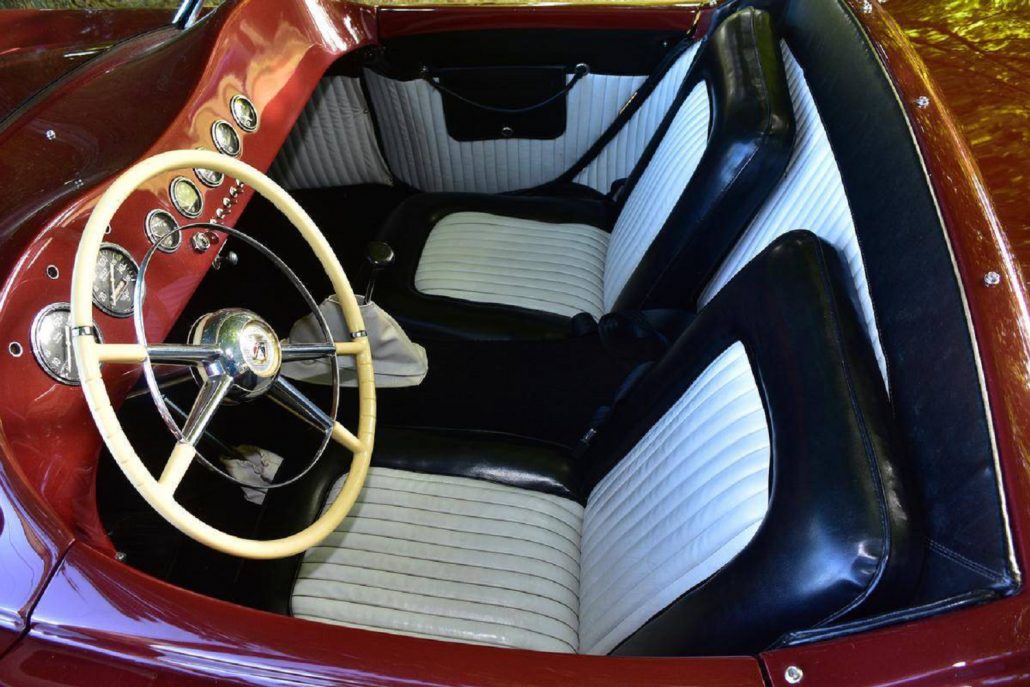 The body, frame, windshield posts, shortened driveshaft and torque tube came from the Woodill factory in Downey, California. A 3 speed manual transmission from a Lincoln Zephyr with a 26 tooth second gear to give a higher ratio was teamed with the Columbia 2 speed rear axle.

The car won its class in several car shows from 55 through 59, mostly in Detroit area which along with Southern California were the street rod capitals at the time. From about 1965 the car sat in storage until 2011 when a complete frame-off restoration was commenced with the mileage showing 4,900. 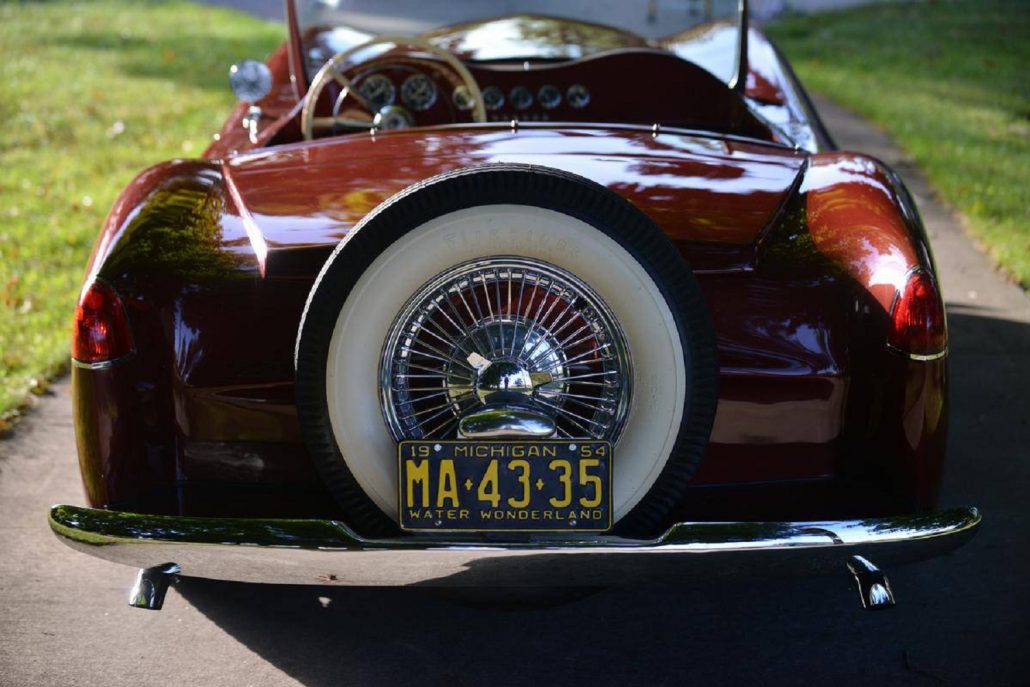 Modifications made when car was built include: Brake drums ground to be concentric, brake shoes were ground to match so car stops very quickly. Shift lever was moved back about 14″ because transmission was so far forward. 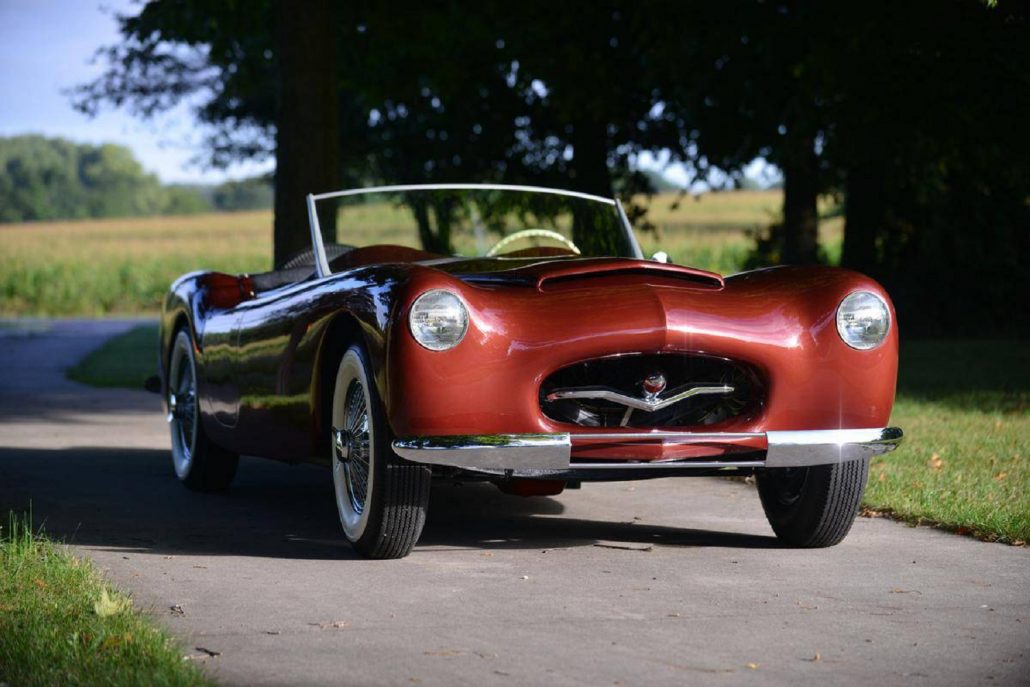 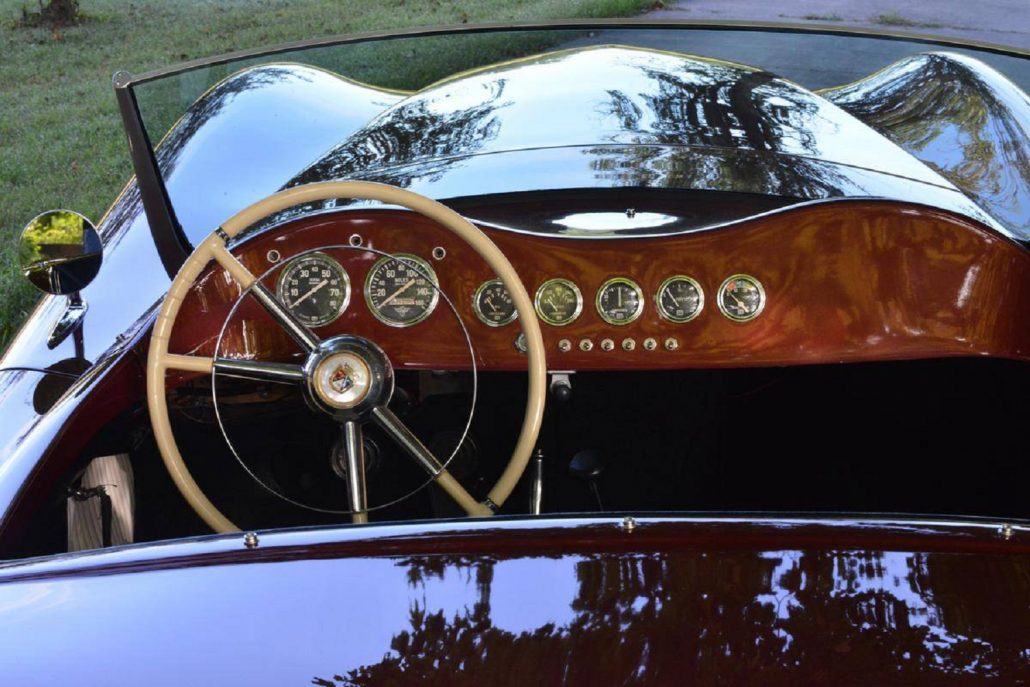 The only flaws are hairline body cracks that appear on either side of the engine which are shown in the last two pictures. The upholstery on one seat is starting to fray.  The pictures of the car from rear-side view jpeg files were too big for Hemmings to accept. Nothing is being hidden. We will send more pictures to serious interested parties. We will have video of the car running and driving as soon as the weather permits.

As there has been growing interests in these very low production number American sports cars from the 50’s it has become much easier to find out more on the internet. Search Woodill Wildfire, you will find articles, (one of which, Hemmings, July, 2015 mentions and pictures this particular car), loads of pictures, many of this car at various shows. Also search 1957 Chevy 283 engines with Rochester fuel injection. We also have photos and film of this car at 50’s car shows and drag racing. 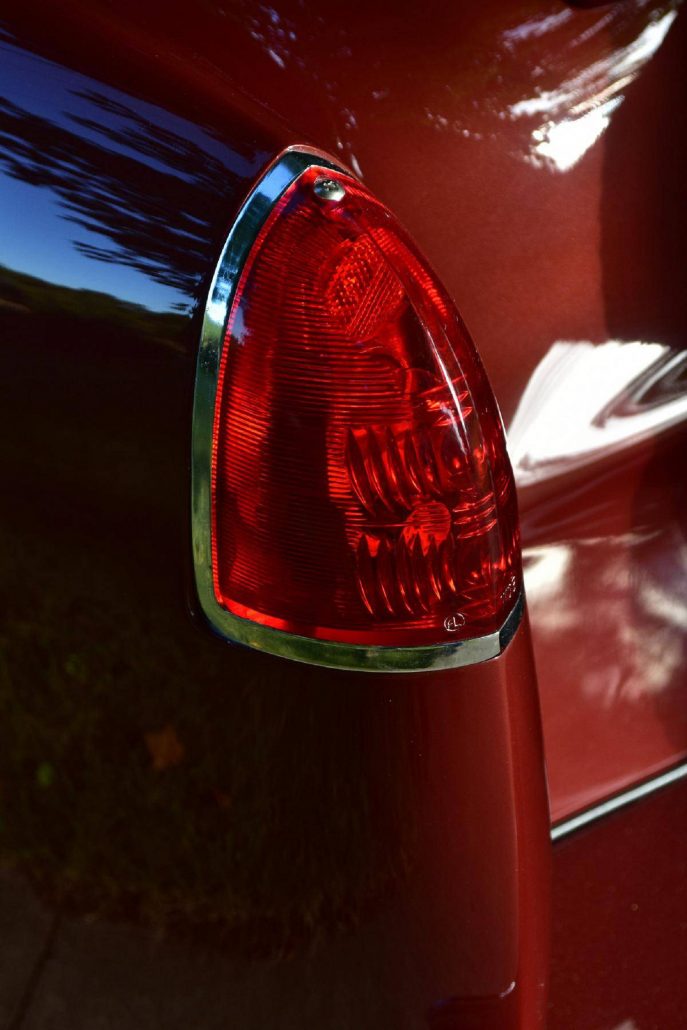 We wish the Foster family the best of luck on the sale of their special Wildfire.  You can visit the full ad in Hemmings by clicking on the following link:

You can also visit other American Specials and Special Interest Cars for sale by clicking on the link below: