Here’s a great story for your Kurtis fans out there.  It’s a very interesting proposal from Road & Track, most likely written by John Bond who worked for a short while in the late 1940s for Frank Kurtis.  Here Bond, owner and editor of the magazine by 1954,  was promoting the possibility of having a coupe body on the Kurtis KK 500 chassis, which would have been a great idea to implement.  The article went as far to show one stylish example of a body that might be considered.

I came upon this article via our recent story about Les Zoller’s Allied Kurtis Blackhawk.  Click here to review this article on Les Zoller’s Kurtis Allied.  Les remembered this article from reading it about 40 years ago and thought that Kurtis should have made the leap and started offering the Allied Blackhawk Coupe body on the Kurtis KK 500 chassis.  And that did actually happen – just not by Kurtis.  So far we have found three 99″ wheelbase Allied bodies on Kurtis KK 500 chassis:

So the proposal in the article was excellent and did happen – just not with a unique body offered by Kurtis.  It happened with individuals who bought the Kurtis KK 500 chassis and decided what body to use on the chassis themselves.

For ease of reading, we’ve retyped the article below.  At the bottom of the story are the original pages of the article for reference.  Have at it gang and remember… 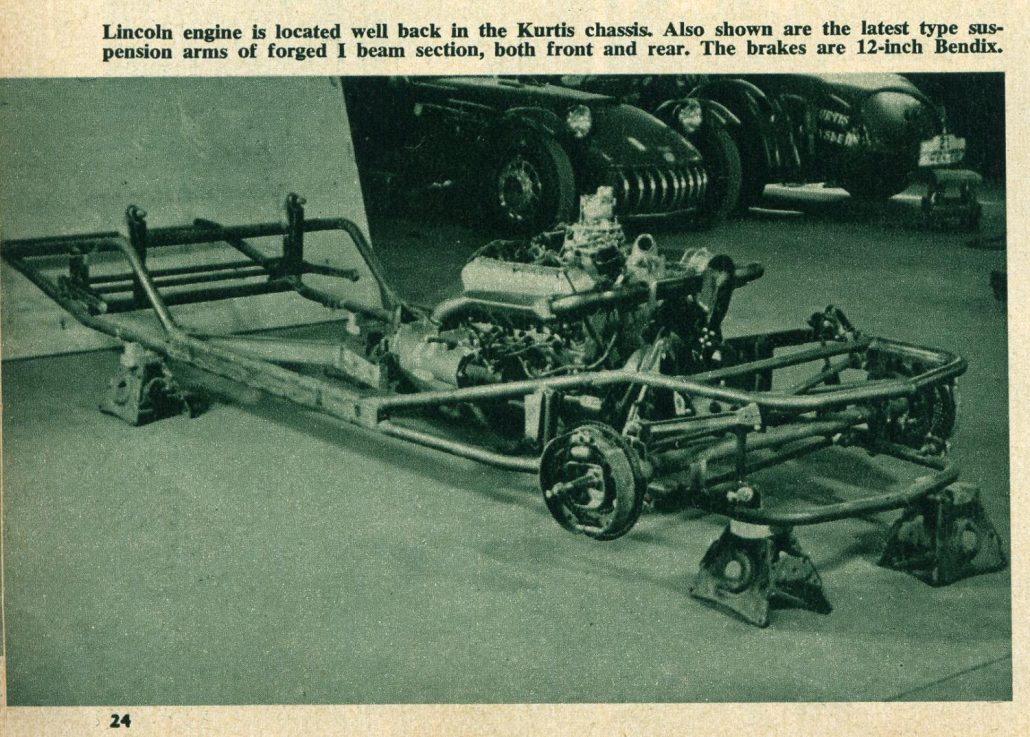 Frank Kurtis is the first to admit that his stock open sports car is not beautiful.  To build an American competition sports car to a price, with present hourly rates for skilled labor, is no small problem, and the contours must of necessity be relatively simple to minimize hand forming and finishing.

He has, however, made available certain portions of the body in moulded fiberglass, notably the nose, fenders and tail assemblies.  These offer a cost saving over aluminum and conform to the established identify of the metal-panelled roadsters.

Rumors of a new streamlined coupe from the shops of Kurtis Kraft have been frequent and unfounded. Although a coupe version has been under consideration for some time, the design has not yet been finalized.  As is generally realized, a coupe body offers considerably less air drag than an open roadster body even though it usually has more frontal area.  The problem is to construct such a body so that it will weigh little, if any more, than a roadster.

CAPTION: Line drawing of the proposed competition coupe on the Lincoln-powered Kurtis KK chassis. Overall height of the car is only 54″ and clearance under the oil pan is 5.75 inches. Artists impression (below) of the completed car.

Even if the coupe weighs the same, the gear ratios must be altered to get optimum results, and unless four speeds are used in place of three, low speed acceleration will be reduced.  These are some of the problems posed when a sports car is engineered.

During a recent visit to the Kurtis plant, McKinley W. Thompson, Jr. saw a Lincoln powered KK chassis under construction.  Mr. Thompson’s designs have been prominent in the awards list of nearly every magazine contest, including his “Targa Florio” model which appeared in Road and Track for April, 1951.  Intrigued with the possibilities of the Kurtis chassis, he evolved the interesting coupe featured here.

Mounted on a wheelbase of only 99 inches, the lines of this body will, without question, add a very considerable amount to the top speed.  With a frontal area of 20.3 sq ft., a rough estimate of the top speed would be 140 mph with 205 bhp, about 20 mph more than could be expected from the stock “open” version with similar power. 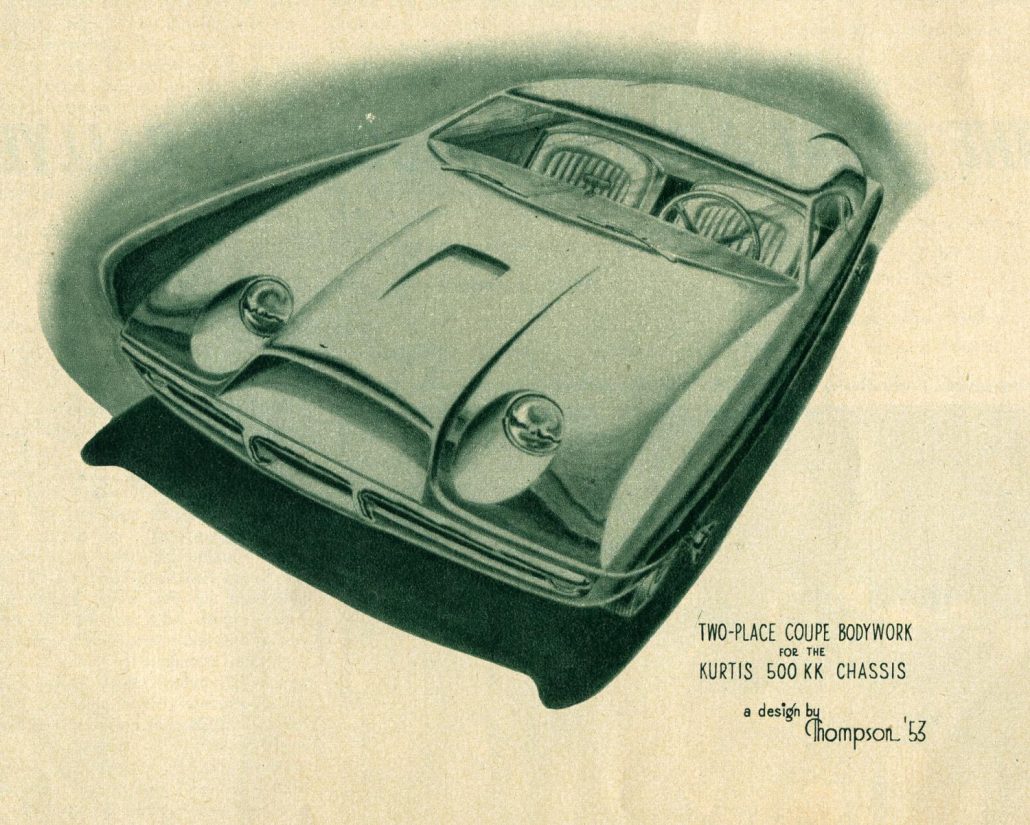 The stock Lincoln-Hydramatic combination weights 1050 pounds, but some savings are expected through the use of aluminum bell housing and intake manifold, plus fabricated headers. The Kurtis chassis weighs only 770 pounds, so a curb weight as low as 2300 pounds is a possibility, knowing Mr. Kurtis ability to engineer weight out of a chassis and body.

Though this body design is only one of several proposals, it would be interesting to see such a car competing with the Cunninhams and Ferraris.  Incidently, the estimated cost of one car, panelled in aluminum, is $9000, complete and ready to go. 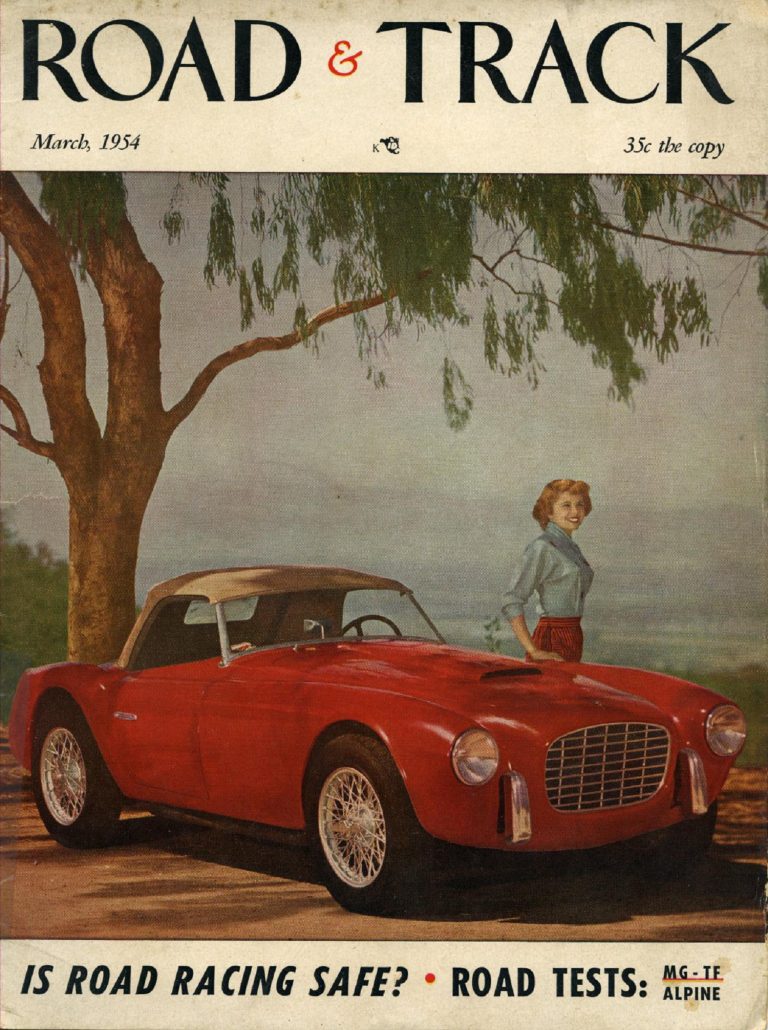 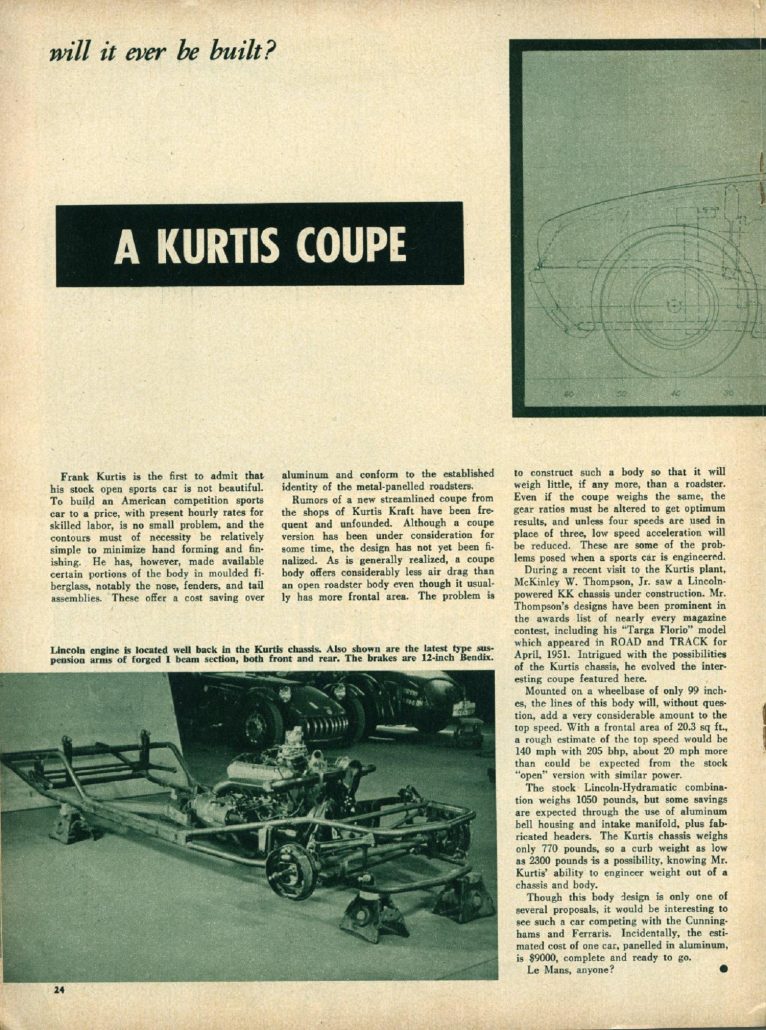 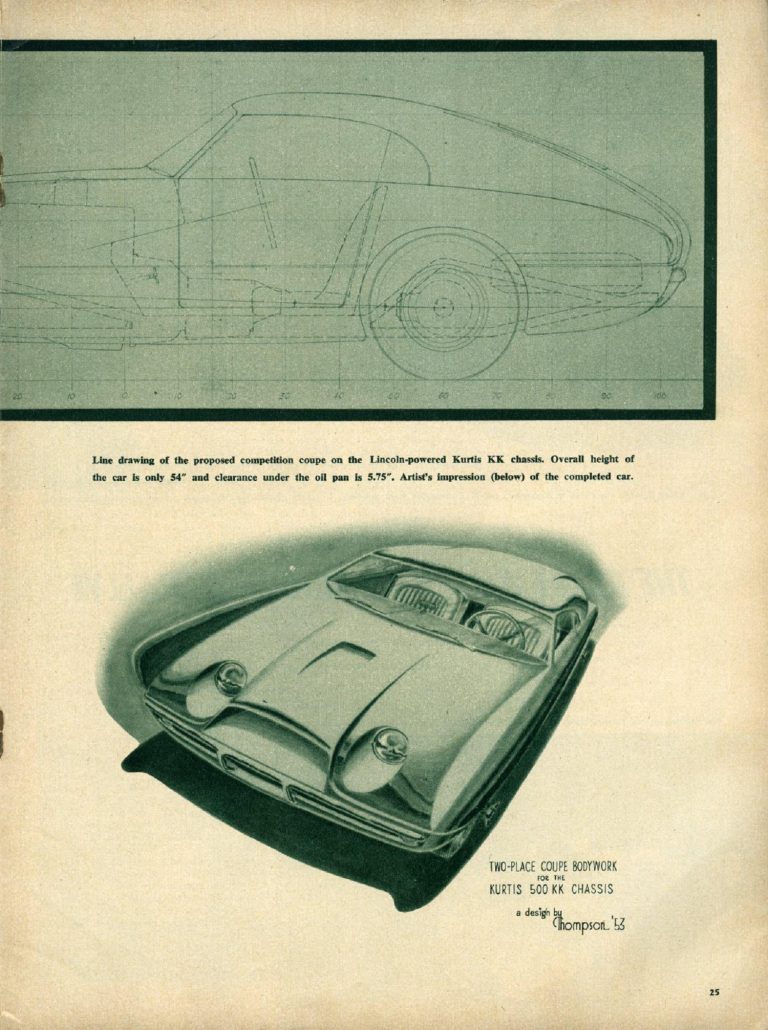