Sometimes it comes down to one piece of information….and sometimes it takes a convergence or several multiple pieces of information which together help confirm the history of the car.  Research and validation of a car’s history is what we do best when it comes to American specials.  And we love doing it.  Case in point is today’s story.

We’ve always been interested in finding the cars that were used in the 1954 movie “Johnny Dark” and we posted two stories in 2015 that focused on these cars and what we knew about each one:

Story: In Search of the Johnny Dark Woodill Wildfire #1 – The Red One

A few years ago, we found a Wildfire that we believe may be the missing Johnny Dark Wildfire.  “Finding it” started with a Woodill Wildfire on Craigslist in Sacramento, California. You can check out the photos below from the ad: 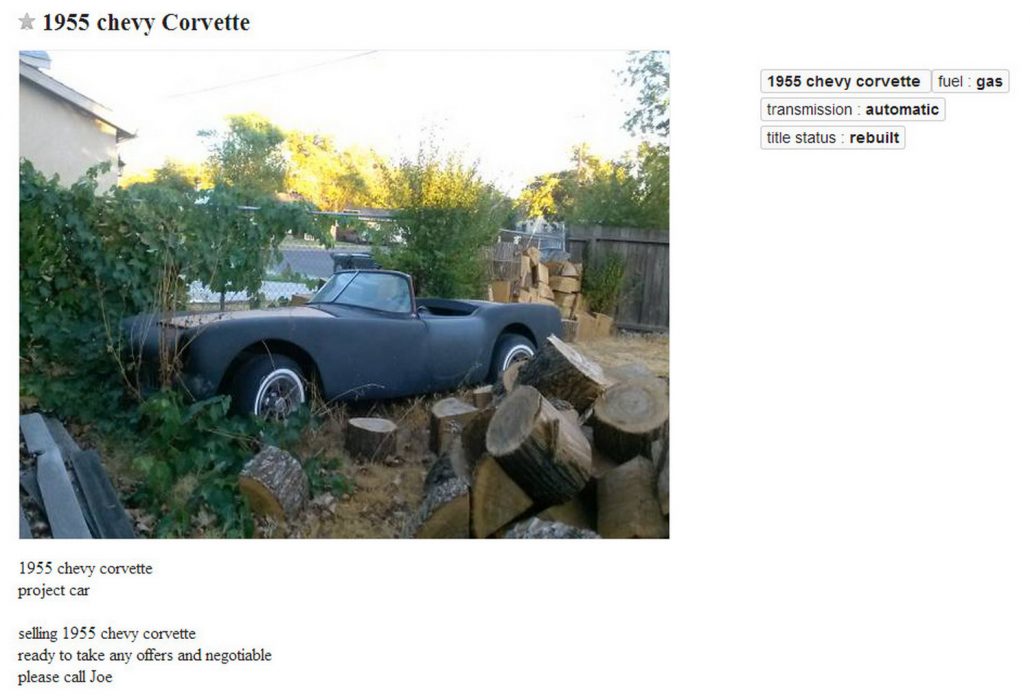 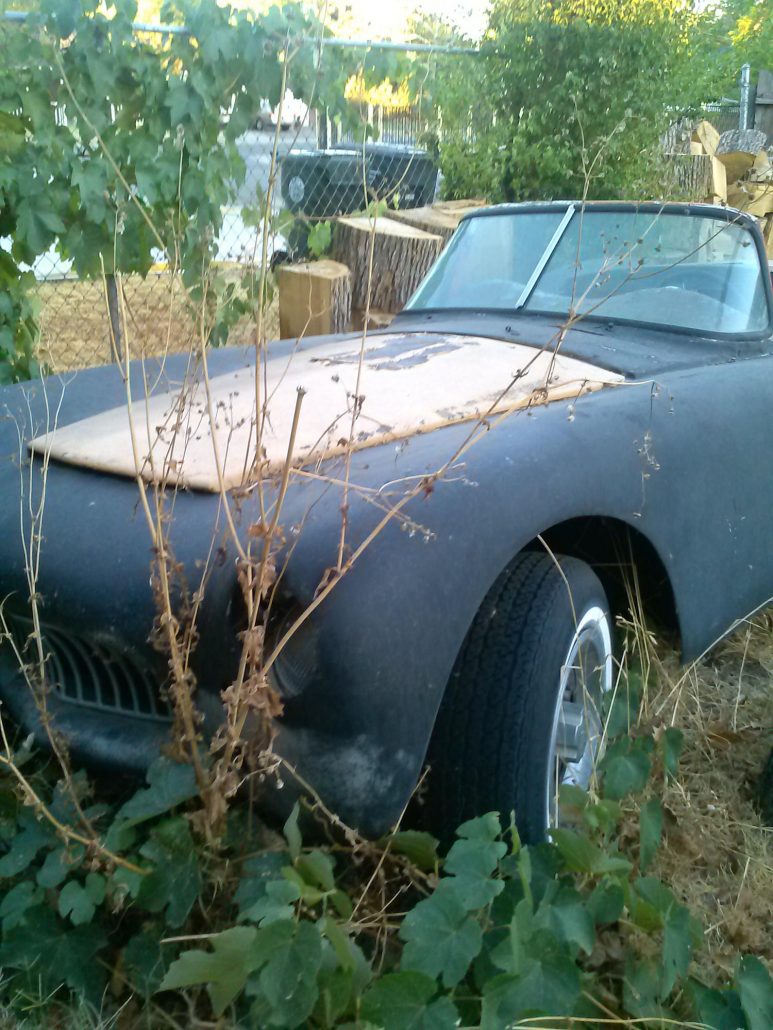 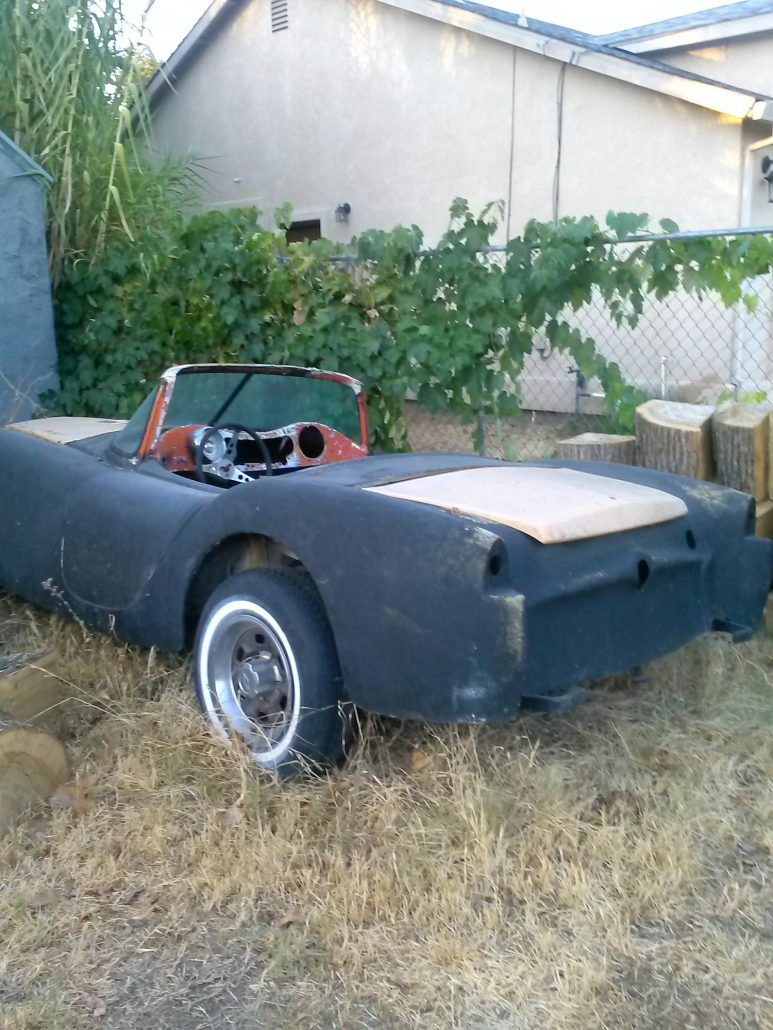 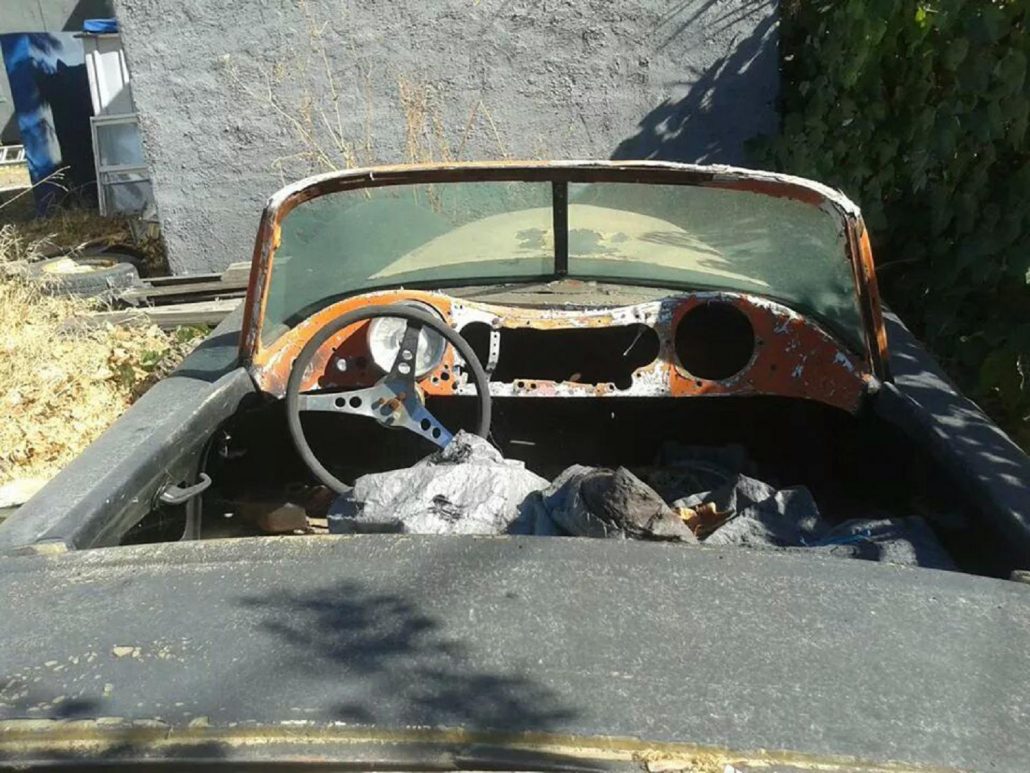 Nothing in particular stood out – but saving a car is saving a car so we made plans to purchase it and bring it home to Tampa, Florida.  That’s when things started to get interesting.

Enter Dennis Gerdes – Son of Glasspar’s Foreman From the 1950s

We asked Dennis Gerdes who is our eyes, ears, hands and more in Southern California to help coordinate picking up the Wildfire and getting it ready to be transported to Florida.  Dennis has always been a good friend to step in and help us retrieve these lost treasures.  Besides being a great guy, Dennis’ father was the Glasspar Foreman responsible for building all Glasspar G2 bodies.  How cool can you get?  And these past many years he’s now helping us save fiberglass sports car history.  A perfect fit.  Thanks for all that you do for us Dennis 🙂

Dennis and his crew headed to Sacramento, picked up the Wildfire, dropped off the car in our storage lot near Hemet, California and sent us the photos below. 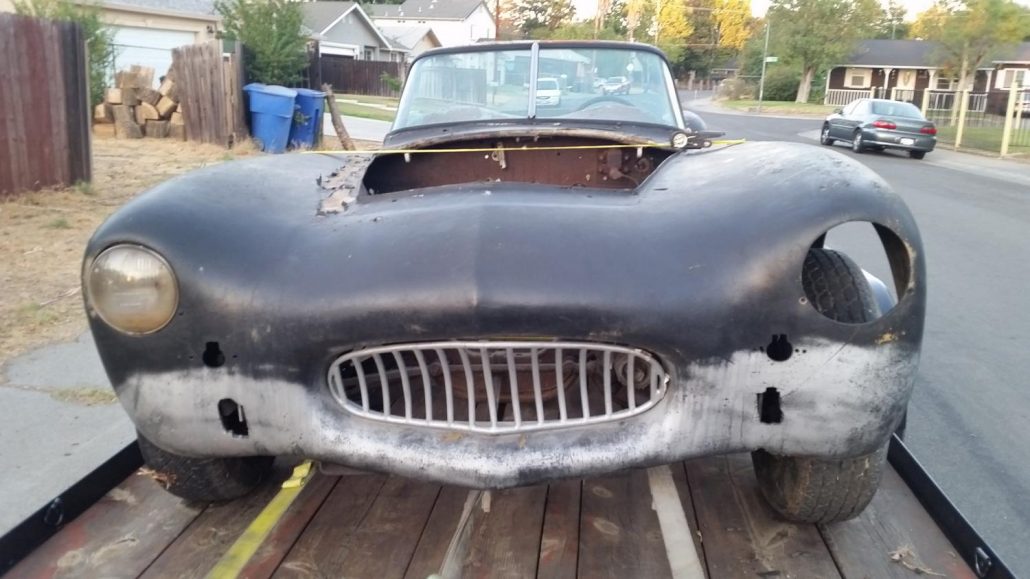 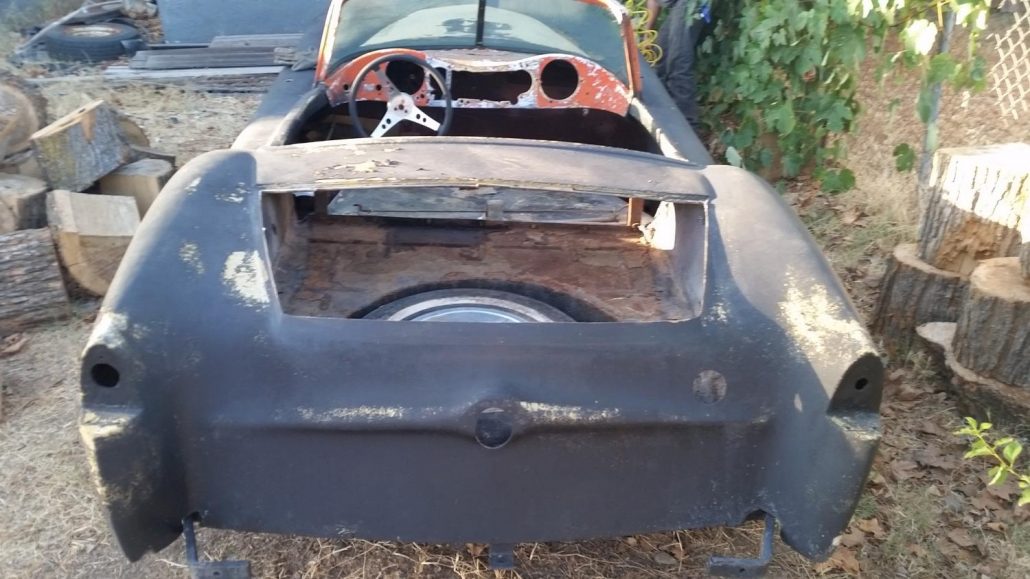 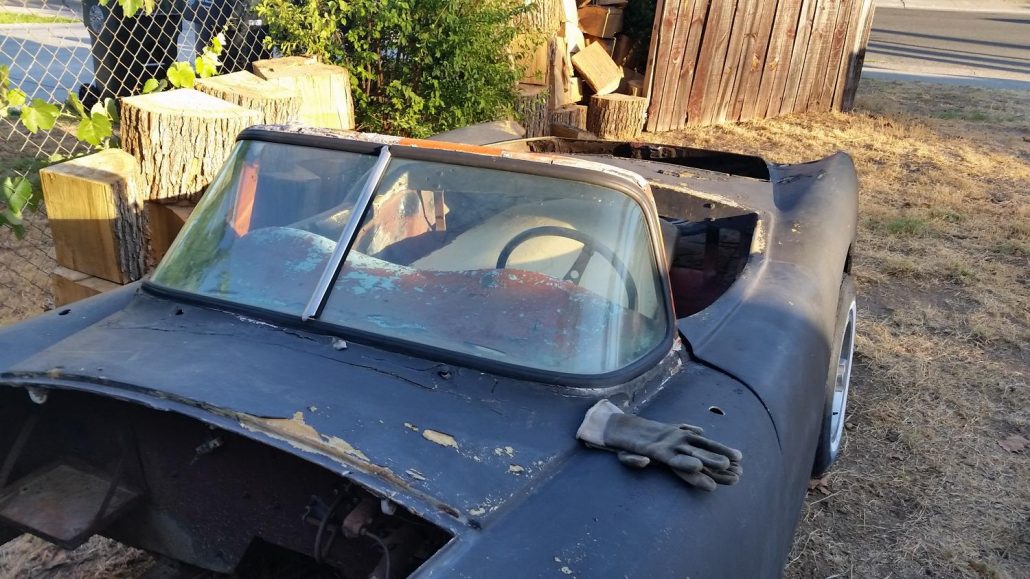 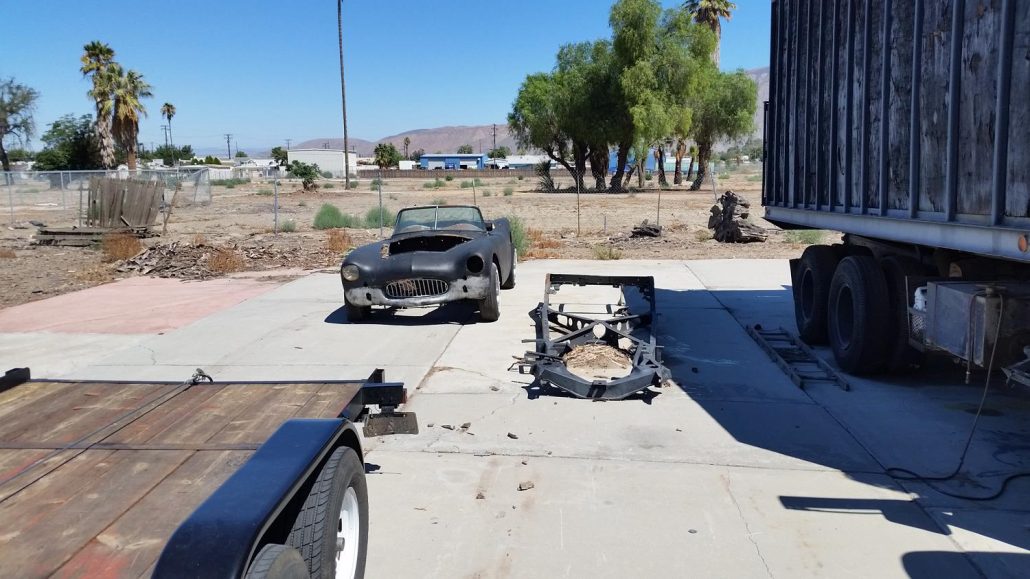 Something about the Grill…

The grill and the color of the car immediately got me thinking of the Johnny Dark Wildfire number 2 – the black one.  Sometimes there’s little to go on to make a comparison but in this case we had a partially smoking gun – the grille.

Here’s a photo from the movie and a close up of the grille from the movie car.  Notice that like all things with handcrafted cars, the grill is asymmetrical.  Specially, the vertical bars at the extreme ends of the grill were uniquely configured – different spacing and lengths from each other.  Have a look below: 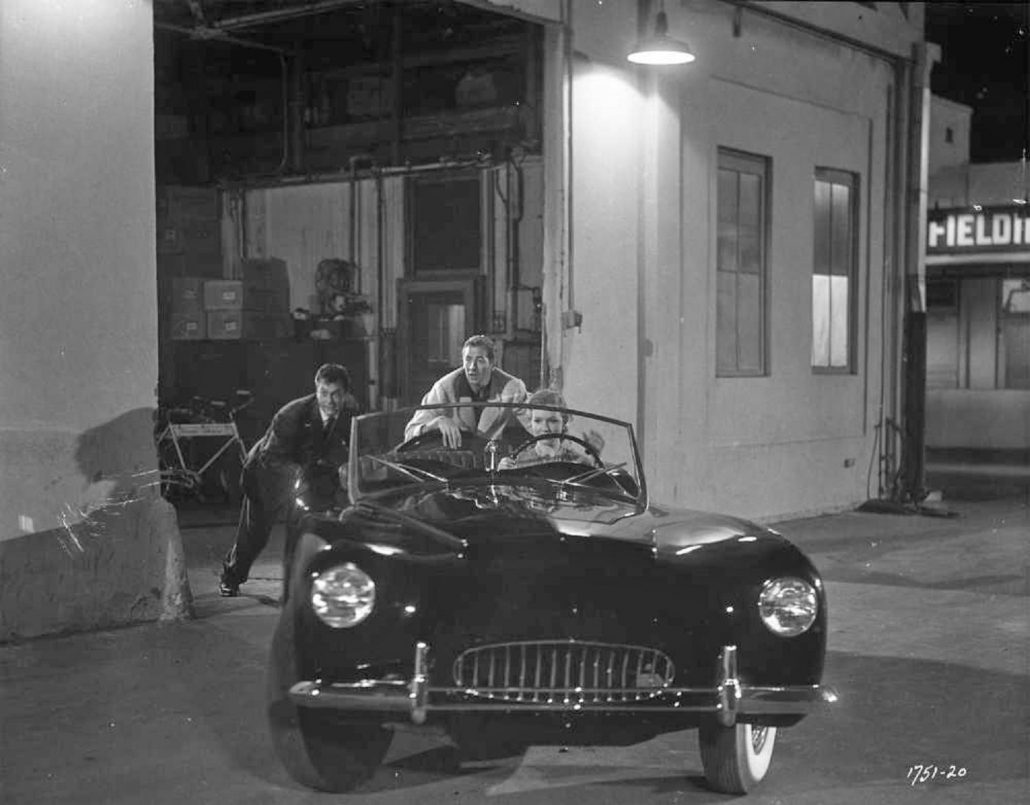 Let’s Look at the Dashboard

The original shapes cut to fit the dashboard instruments looked similar to the Johnny Dark car #1 (red) and matched – somewhat – what we could see in the movie.  Not enough detail here for a comparison but it looks like both dashboards had a very large gauge starting at the left side of the dash.  See photos below.

Hopefully better original photos will be found of the dash of the #2 Johnny Dark Wildfire in the future.  For now, we’ll have to wait, but in the meantime here are additional photos to consider about the dash. 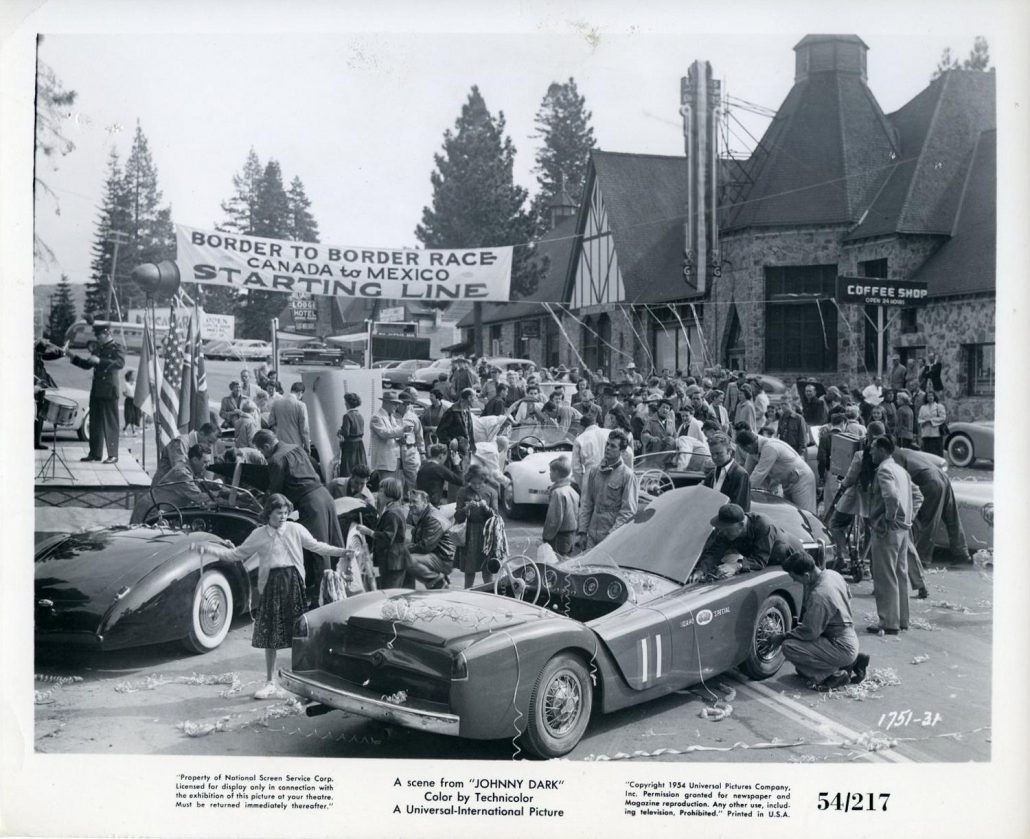 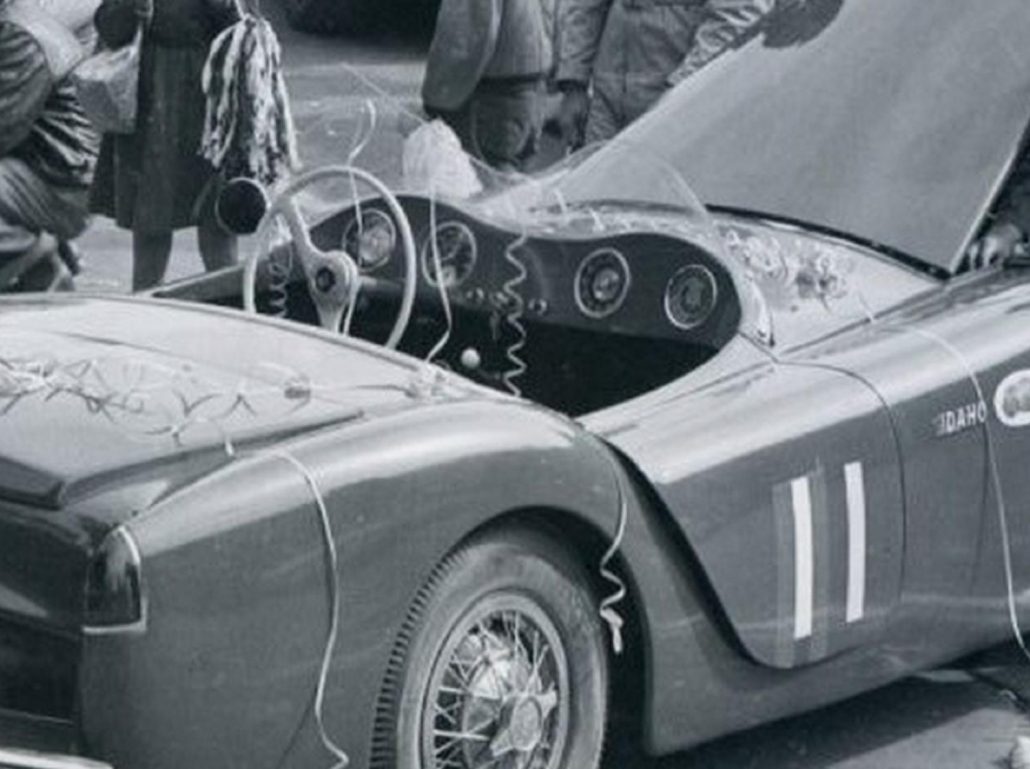 Here’s the best shot we have so far of the dash in Johnny Cark car #2 (black) in the movie: 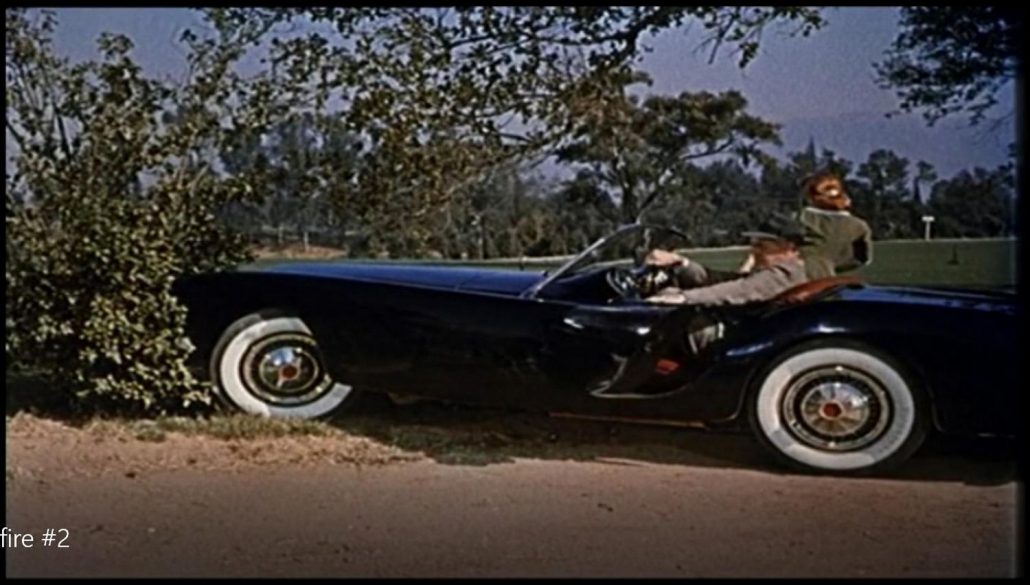 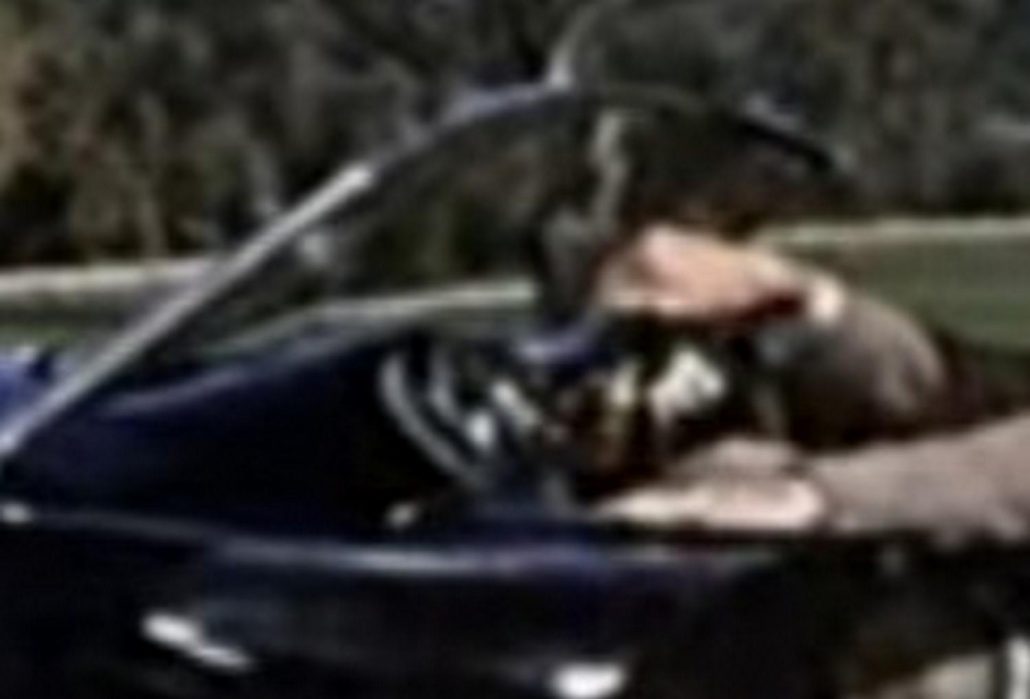 If you scroll up and check out the photos from Craigslist, you’ll see that the dash has been hacked into.  If only we knew what it looked like before someone did this.  Well….because of Frank Cornell and his Wildfire archives, we do.

Frank was the Woodill Wildfire historian since the 1970s and passed on his archives to me many years ago.  Going thru Frank’s photos, I found photos of this car in Sacramento from years ago – and the dashboard was in better shape than when we received the car.  See the photo below and the closeup via the Frank Cornell archives: 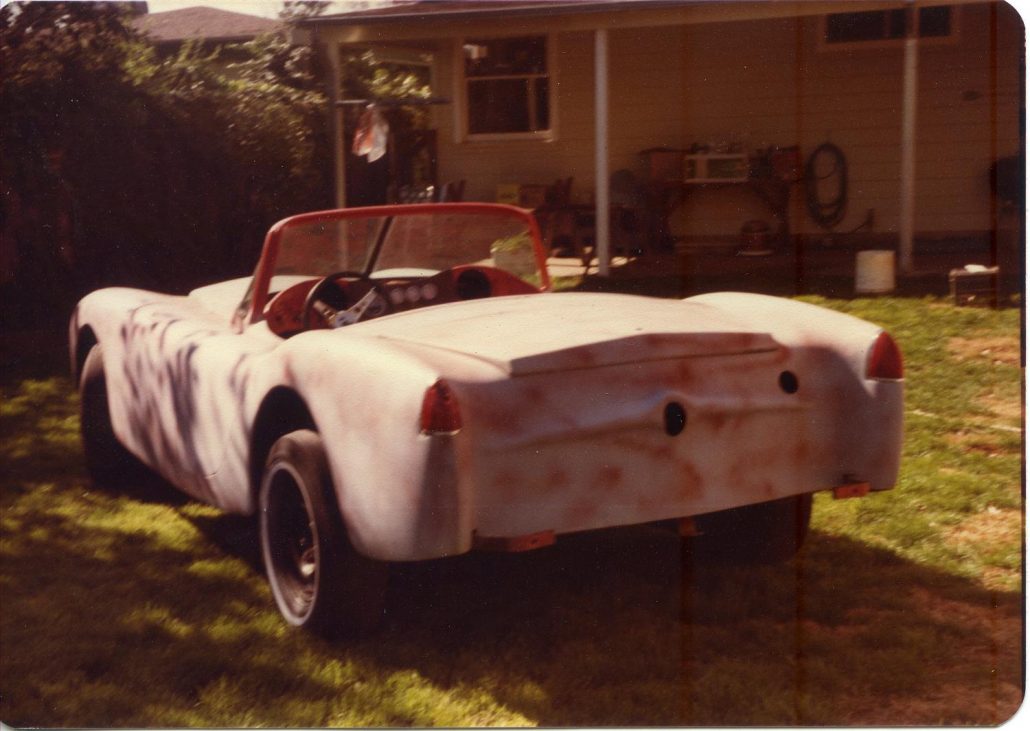 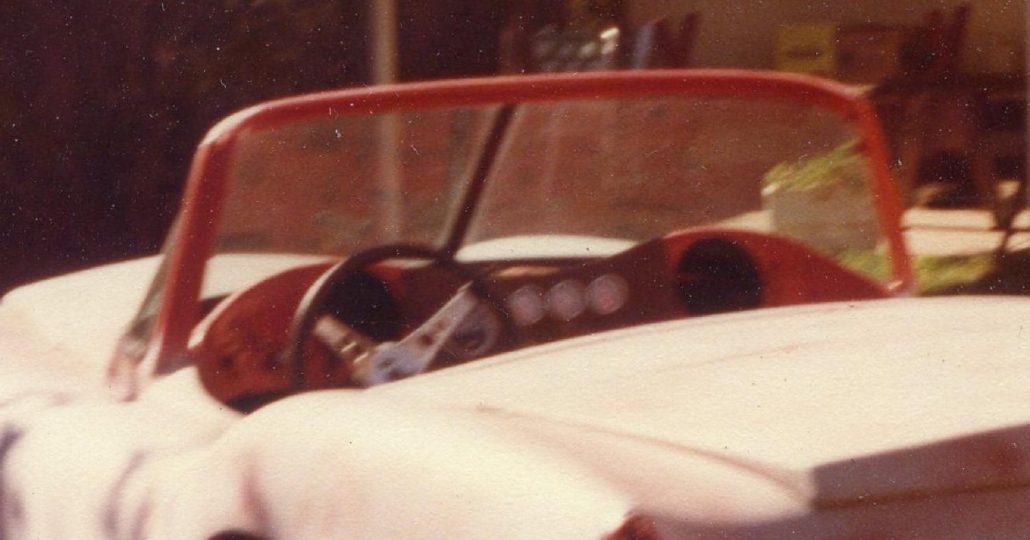 So it looks like there was a large gauge at left, then a medium gauge (perhaps a tachomter), then 3 smaller gauges and one large gauge again.  We’re getting close to matching the dashboard and you can share your thoughts on what you think below.  Everyone, however, would agree we need to find a photo or two from the 50s showing the original dashboard in its newly minted (1953) form for the black Johnny Dark car.

While we know that the red Johnny Dark Wildfire was a factory car, all evidence points to the #2 black car being built by an unknown and talented builder and used in the movie.  That and other research shows that Woodill built very few full cars.  Very few.

Finally, the holes for the bumper brackets on the car we found in Sacramento, California line up nicely with the brackets used on a Lincoln-Zephyr front bumper which was used in the movie.  The holes are where they should be and not elsewhere.

A Photo of All Three Johnny Dark Wildfires

Like all things in the movies….what you see is not what you get.  Years earlier good friend Gregg Griffin who’s father is one of the original Woodill Wildfire builders and owners (and still has his) shared the following photo from the beginning pages of the 1954 booklet titled “Manual of Building Plastic Cars.” 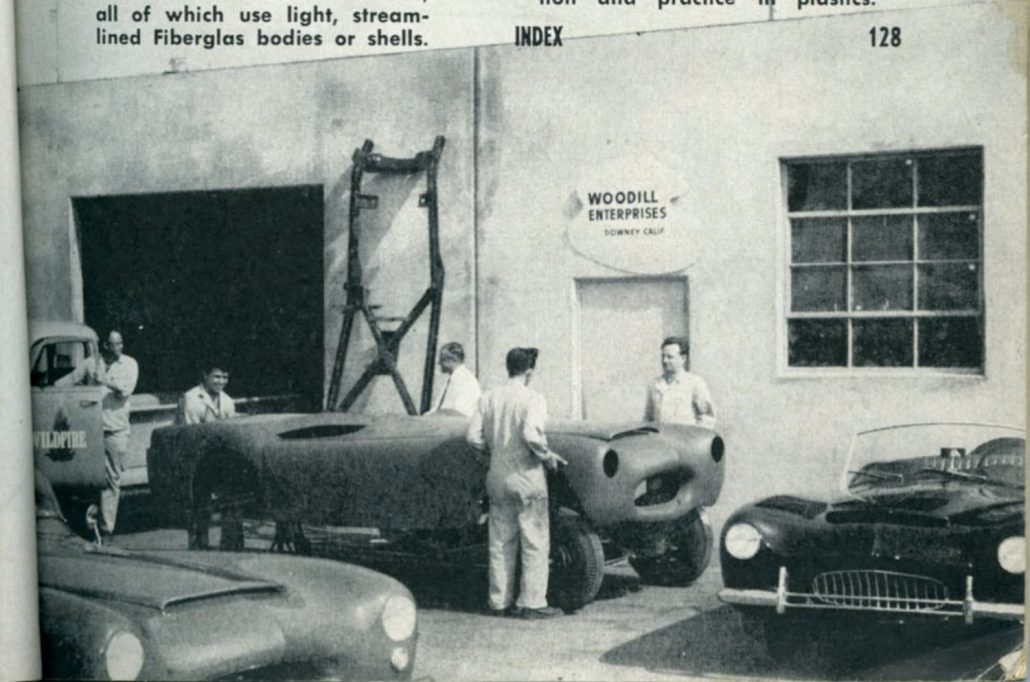 The sports car scenes in the movie had been shot late in 1953 so the timing of this photo fits well given that it’s a book from 1954.  And the fact all three Wildfire sports cars are in front of Woodill Wildfire Offices is a bonus.  Good eyes Gregg!

Gregg went on to share that the photo seems to shows all 3 cars used in the movie:

His analysis is the best fit to what we see in the photos – Woodill prepping the 3 cars for the movie scenes.  You can check out the first body/chassis and Wildfire # 2 in the following compilation from Johnny Dark:

Jack Farr, owner of the Motorsport Ranch in Cresson, Texas, is the new owner of Johnny Dark Wildfire #2 and is having our team at JR’s Speed Shop complete the restoration work.  To kick off the restoration, Jack purchased a perfectly restored Ford Flathead engine.  It’s already been installed and is ready to go.  Vrrrroooommm!

Chassis work is nearly complete and should be finalized in next few weeks.  Body work has been roughed out but the team needs to get it paint ready, so there’s still work to do.  Plus interior and sorting but it’s on the path to getting done and has been exciting to watch.

Let’s check out some of these “in-process” resto photos. 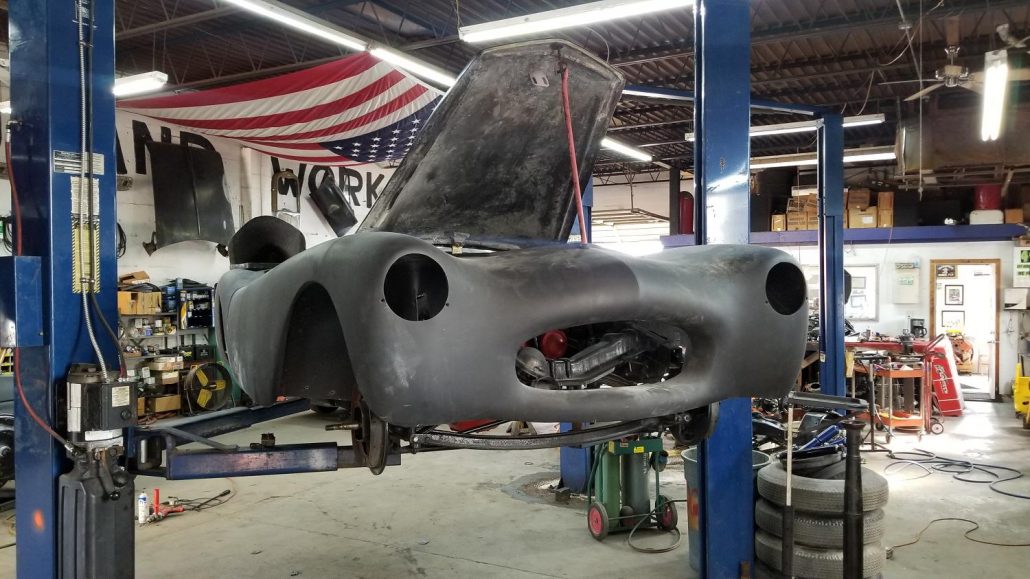 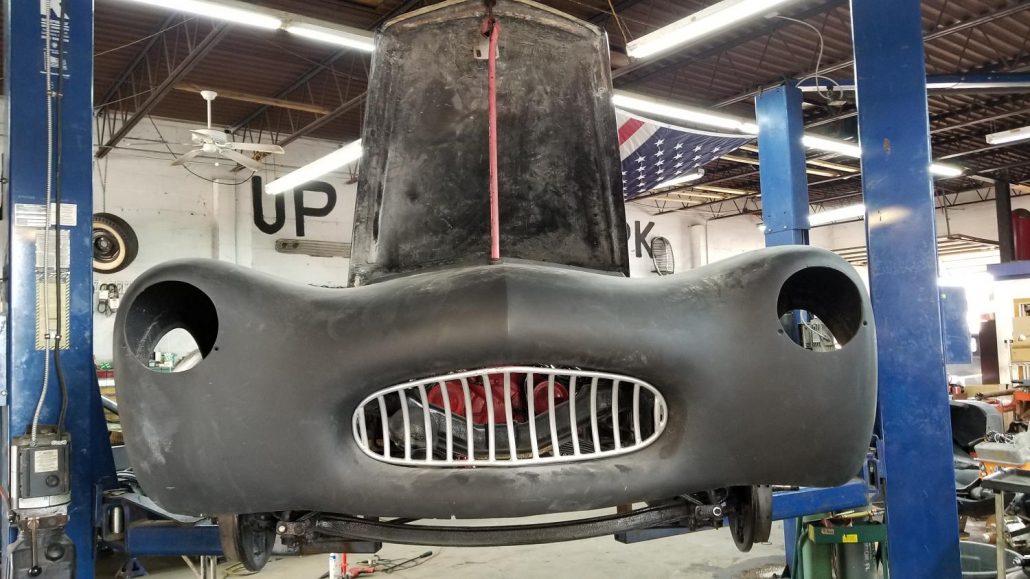 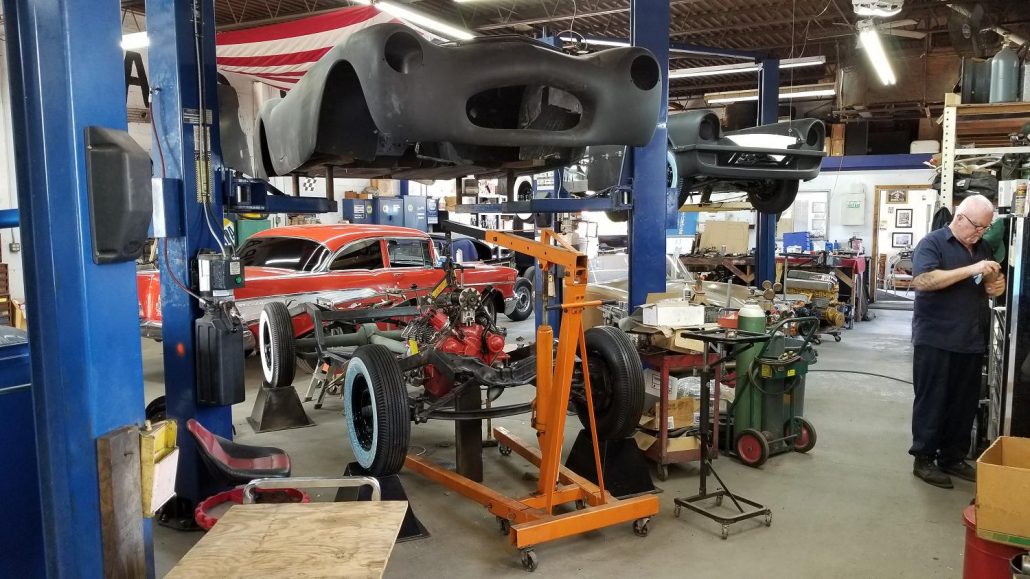 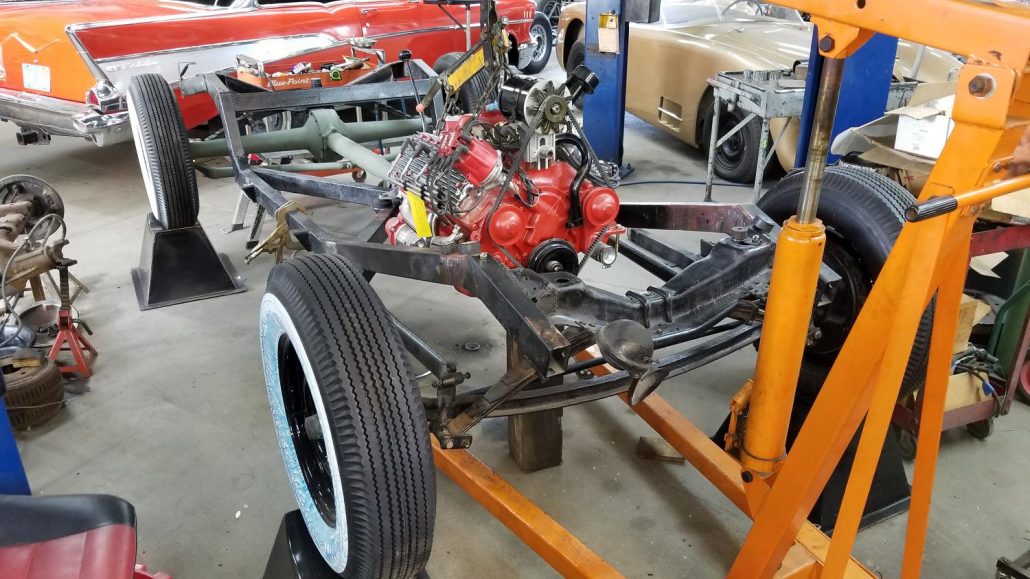 We’re looking forward to finished car and its debut – either in Florida or Texas Jack’s home state.  Either way, it will be great to see this car completed, back on the road and a feature car at the automobile museum that is part of the Motorsport Ranch.

Go get ’em Jack and JR’s Speedshop.  We’ll be with you every step of the way.