I often equate researching the history of lost American sports cars of the 50s as akin to trying to get a drink of water by running around the room with an empty glass and gathering as much water vapor as you can.  You have to combine hard work, collaboration with many of you out there, research, reading, lots and lots of luck and a great deal of “faith” that you’ll find what you’re looking for before that glass looks full enough where you can get a “drink.”  And as many of you know gang, I am one “thirsty” car guy!

Today’s story begins about 7 years ago with a person I consider the “founder” of the historical appreciation for handcrafted sports cars of the ‘50s – Fred Roth.  Fred and his family have been charting the history of postwar American sports cars on their website www.Americansportscars.com for over a decade – but their dedication to the history of these cars goes back considerably further.

The first time Fred and his family appear in print is in a 1974 issue of Special Interest Autos, where they were featured in an article about Woodill Wildfire sports cars authored by good friend Michael Lamm.  1974 to now is 40 years gang.  That’s quite a dedication to the history and appreciation of these cars shown by Fred, Deanna, and Christopher Roth – and we appreciate their efforts in every way 🙂

Today, the Roth collection is legendary for having some of the best examples of these early postwar American sports cars in the world.  Here are two recent articles that focused on specific cars in their collection:

Seven years ago Fred tutored me on the history of many of the cars we study here at Forgotten Fiberglass and what he had learned through the years.  At that time, he had located, acquired, and restored the only known example of a Maverick Sportster – one of the prototypes used by Sterling Gladwin to show off his design at none other than the Pebble Beach Concours d’Elegance in 1953 and 1955.  Not bad!  Fred had located a second Maverick years ago, but the trail on that car had gone cold.

Since that initial discussion, Rick D’Louhy and I have been fortunate enough to locate two additional Maverick Sportsters – one of which we have in restoration with co-owner Tom Chander of Elkader, Iowa.  But where are the other four Mavericks?  You guys know me by now…ambiguity and uncertainty are my enemies, so I’ve continued to look for and research this car and others too.

Alden has been collecting automotive literature for over 50 years.  His collection is amazing and his tenacity for tracking down history of little known cars is legendary.  And Alden shares much of what he loves about automobiles on the following websites:

In the past 20 years, part of Alden’s focus has been on the history of the Maverick Sports Car Company which was located near San Francisco, California – not far from where Alden has lived most of his life.  And his research efforts have met with great success – some of which we’ve shared on Forgotten Fiberglass – and some which we’ll share in the near future.

Several years ago, Alden shared the following photo of a Maverick.  This was featured in a newspaper concerning a man who used to own this car years ago.  No name of the car was mentioned in the article – Alden recognized this as a “Maverick” from the newspaper photo alone.  Alden’s skills are pretty impressive gang!

The photo above showed David Schuette in his Maverick – taken in Lake Country, California in 1964.  Alden contacted the family and but this photo was the only one they could locate showing the car.  The photo shows a red Maverick Sportster with an unusual wrap-around windshield.

The car appears to have no driver’s door which is consistent with Sterling Gladwin’s intentions.  He designed the car with just a passenger door.  He did not want the driver to step into traffic into harm’s way.  It was his car, his design, and he wanted the occupants of his car to always be safe.

And that’s the last we knew about this Maverick – until today.

Recently I was looking through newly acquired magazines and one of them was the 1962 Annual Custom Cars booklet by Trend Books.  In a small section that discussed the Oakland Roadster show I spied something that looked familiar – a Maverick with a wrap-around windshield.  Let’s look: 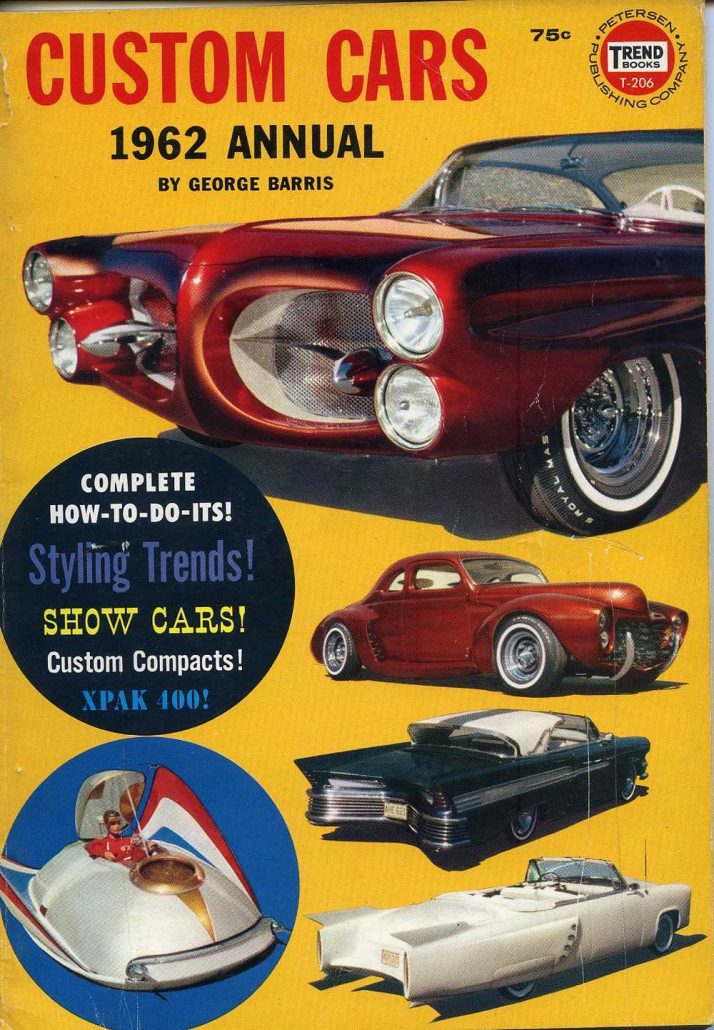 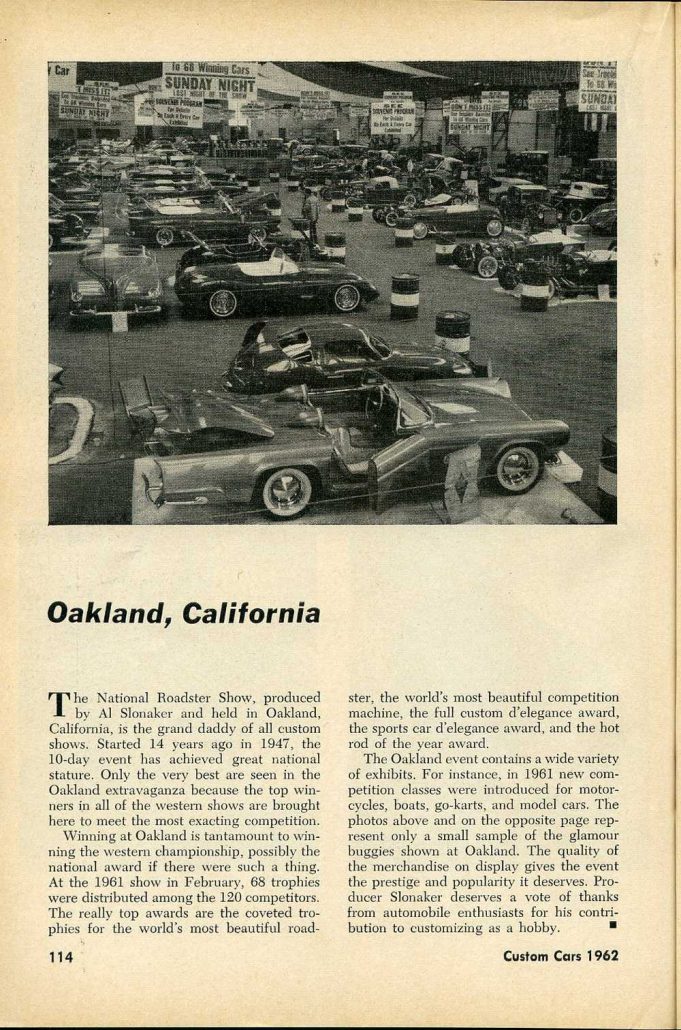 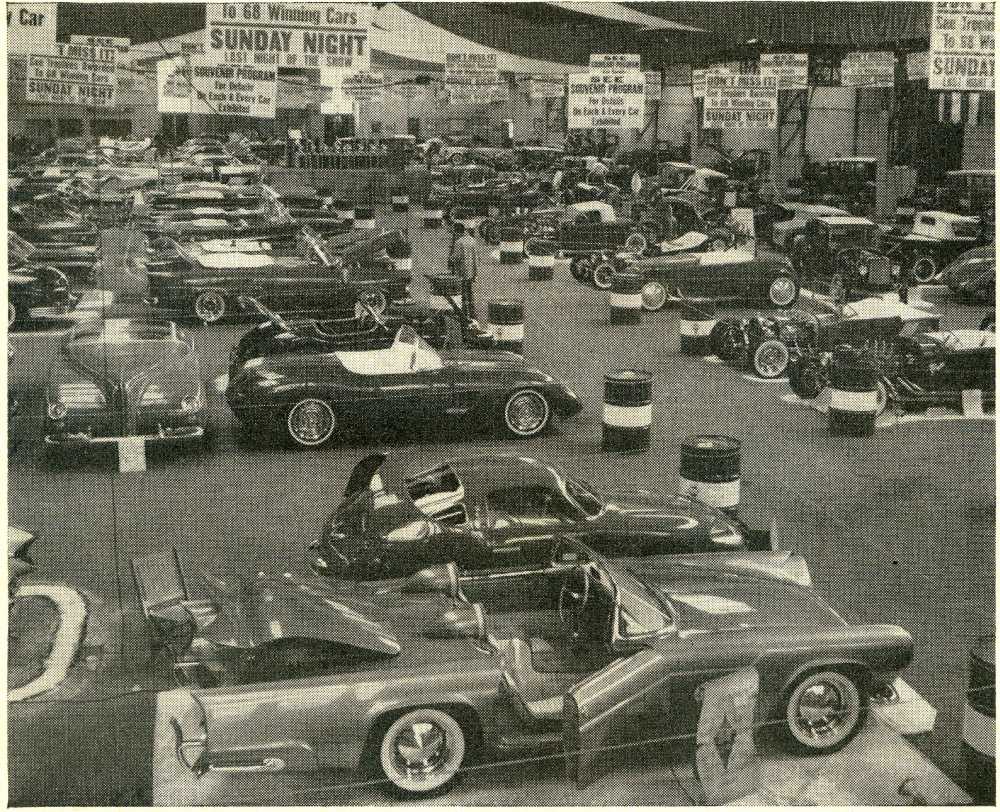 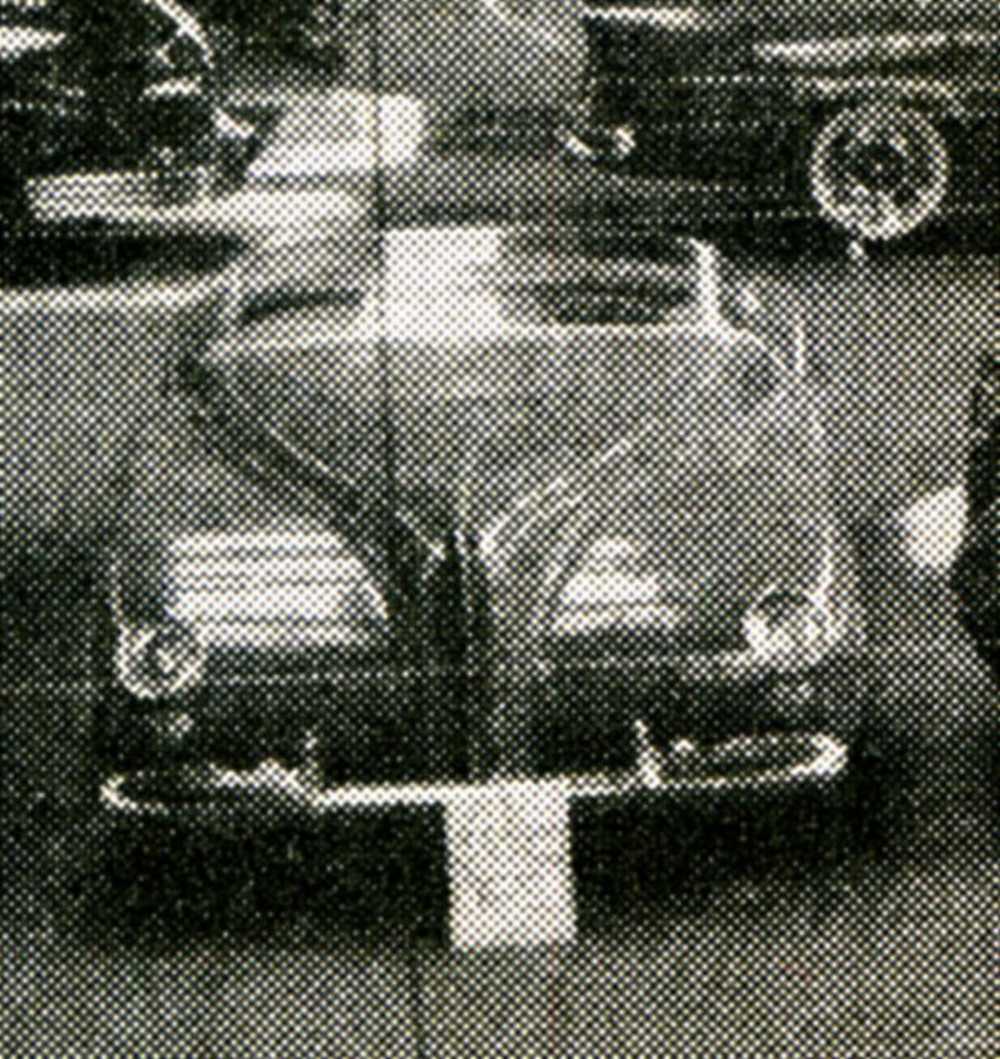 So…how does this little additional bit of detail help?

Good question.  For me it means that I can seek photos of this car from the collectors that have photos from the 1961 Oakland Roadster show.  And…if I can find a photo of the front of the car showing the sign leaning against the bumper, I may be able to confirm the owner’s name – which may or may not be David Schuette.

If the name is different from David Schuette, it will give me a lead on the family to find that may have more photos of this car.  And all of it is a precursor to finding the fourth Maverick – the one owned by David Schuette in this story.  And if we do find it, we’ll share it first here on Forgotten Fiberglass.

Getting that drink of water that I mentioned at the beginning of the story can be a long time in the making gang, but I think we’re off to making the glass “half full” with the discovery of this photo and what it may mean to uncovering additional information about its history.

Geoff Hacker – aka the “Maverick Hunter” (for today)