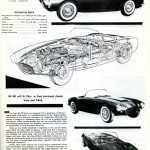 It’s all about the history.

We see a great looking car, we recognize how special the “build” was back in the day, and when we look at today….2011….we wonder – perhaps forever – who built it and what was their “dream.” A car without history is like Skyline Chili (my favorite food) without the secret sauce. It’s just plain spaghetti….or in this case a neat old special.

So….when Barry Hall shared with us the history of the Byers SR100 he had found many years ago, I was delighted in every way. Who was Cal Johnson? Why did he build it? What was the car’s history? And was Cal still around to share the story?

The good news….Cal was around and very helpful to Barry when he gathered up information about the car. Recently, I went back to Cal and was able to talk in detail about his Byers SR100. The first thing I learned was in fact he had bought this body from Kellison – straight from the factory. Pretty cool! Kellison started offering the SR100 bodies in the 60’s and it even appeared in some of their catalog – devoid of the name “Byers” but still a SR100 in every way.

In fact, a few things distinguish a Kellison Byers SR100 from a Jim “Byers” SR100. In discussions with Frank Tift, Jim Byers’ first and longest tenured employee, Jim built all bodies laying the fiberglass up by hand. Kellison bodies were built using the chopper gun – a newer, quicker method.

Second, Jim Kellison made at least two changes to the design:

* He kept the original grill shape and dimensions the same, but eliminated the several inch “return” that brought the grill mouth into the body by several inches. Instead, he rounded the opening of the grill, keeping the original design and making it easier to build and pull from the mold. 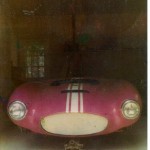 Finding the history of some of the specials we find is like finding the treasure at the end of the map. Let’s see what “treasure” there is to be had with the interview I did with Cal Johnson in April 2011.

The Interview: Cal Johnson and His Byers SR100 427 Special

I bought the body new from Kellison – it was the most exciting day in the world when it arrived. It was a one piece body, and came crated from the factory. Lots of work to do, but I was rarin’ to go.

I started building the chassis in 1964. I started with a frame I bought from “Chassis Research.” This was one of the first altered chassis with a tube frame you could purchase. You could buy a frame which we did, and then I added to it and made modifications.

I used an Oldsmobile rear and 4 inch main rails. I bought the frame (Chassis Research) from a friend – we had a partnership to build a race car, and when we didn’t finish the project, I got the frame. I put in the rear suspension, and front spoke magnesium wheels. Up front, we used an old Ford straight axle with a transverse spring, Ford spindles, and no brakes – sort of. The rules required brakes, but they didn’t have to work. So we used the brake hubs – and that was all. I ran a 104” wheelbase to increase stability, and put the engine 25% back in the chassis. 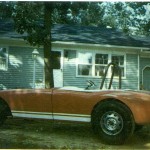 For rear suspension, I used an 8 ¾” Chrysler with a 4:56 rear ratio and Oldsmobile Toronado wheels. The rims allowed me to keep the wheels inside the body – which I preferred to the look of the wheels sticking outside the body shape. It also kept us from narrowing the axle.

In 1967, I made a 1952 MG body out of fiberglass. The actual body had been left by a guy from the sports car club of American next to the track in Vineland New Jersey. I made a mold off of the body and used the fiberglass MG body on the same chassis and ran it in 1967. I also installed a 427 Chevrolet engine. And then they dropped the sports car class which was 4 times the cubic inches – 1708 pounds. So back to using the SR100 body, but now I would be in the “B Altered Class” which required more weight.

I cut in a trunk at the rear of the body for battery storage and weight – we needed that depending on the class we were running, and the trunk would also open up at speed on the track and release any trapped air. I also created holes at the rear of the car to release trapped air as well. I also created a hood up front, but later on we fiberglassed that in, and made the whole front end tilt forward to give ready engine access. I painted it the Plymouth Duster color “Plum Crazy” with white stripes.

I continued to use mostly stock parts except for a Weiand manifold with two 660 Holly carburetors. I did make my own exhaust headers, though, and used a magneto. By the way, I ran that exact same magneto in every race engine I built from 1963 to 1990.

So… I needed more weight, and I moved to “B Altered Class” which was 5 times the cubic inches (five pounds per cubic inch). So I put the SR100 body back on it but it had to be 427 pounds heavier. I cut the transmission in half and put a clutch / torque plate on it and it ran 9:80 / 143 mph. Back then this was just under the “A Modified Sports Car Class” record. Quite an achievement at the time! 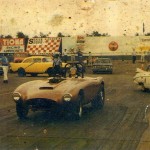 I raced the SR100 from 1966 thru early 1969. I eventually put a tonneau cover on it and it snapped around the cockpit. And then I parked it in 1969 and there it remained for just a few years.

I sold the body and frame to my good friend Neil Parker. The car sat out by Parker’s Garage in Millville New Jersey for 4-5 years, and around ‘72/’73, a guy wanted to buy the body, and my Neil who owned the car at the time sold him the body and kept the chassis to race. Neil continued to race the chassis with a new body starting around 1970. The new owner of the SR100 body wanted to build a small sports car. I saw the car a few years later driving around. It looked great!

This was so fast that we decided to built a whole new car and chassis, and then sold the chassis to someone in Toms River, New Jersey.

Last time I saw it was about the year 2000 in Lebanon Valley New York. The car still had the Fiat body, and it had a small block Chevrolet and he was running 10.10’s and the owner was enjoying every minute of it. The car/frame is now on its fourth or fifth owner and still running today.

I raced the SR100 at the following speedways: 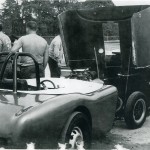 It was quite a car with a terrific history – and it’s still out there creating more history all the time (with a different body).

Great story and I want to thank Cal Johnson for taking the time to help me capture his thoughts and memories on this special car in every way. Restoration of the car is starting soon, and the new owner is looking to body this on a high performance 1960’s Corvette chassis – in part as a way of honoring Cal and its Chevrolet heritage. Hopefully we’ll see this car back on the road in the near future – and maybe at a raceway or two.  What a sight that would be after so many years. 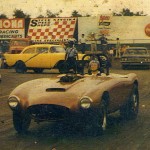 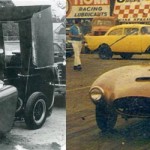