Restoration Work Begins on the Allied Swallow Body – Getting Everything “Square” is the First Step.

I love seeing progress and today’s story is no different.

Charles Le Menestrel of Belgium is a fan of handbuilt American Specials.  Today he’s beginning the “build” of his Allied Swallow shown in today’s story with sights on Bonneville to race.  He chose JR’s Speed Shop in Venice, Florida, one of our Undiscovered Classics Affiliates, to complete the restoration / “build” started earlier this month.  Let’s dig in a bit more.

I’ve been tracking this body/car since it first appeared in 2006.  It’s always been a clean body and one of the few unbuilt Allied Swallow bodies remaining from the 1950s.  What made this even more interesting to me back then (14 years ago…..I’m getting old) is that it was found with a fully built Allied Swallow roadster – both owned by the same person.  I’ve always wondered if the intention of the original builder/buyer was to switch bodies on the same chassis as the owner desired.  I’ve heard many people discuss this idea over the years, but this is the closest I’ve seen to someone perhaps actually planning it (in the 1950s, that is).

The cars were sold on eBay and MG collector Dick Knutson purchased both cars.  Dick held onto both for several years and then flipped each car separately. 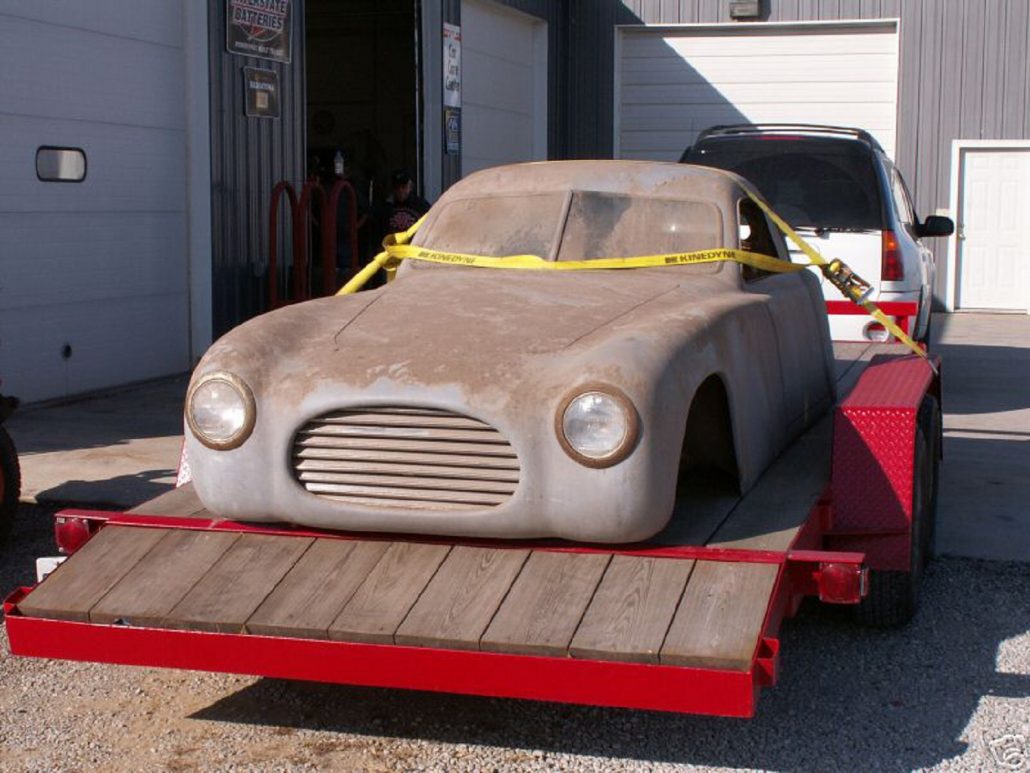 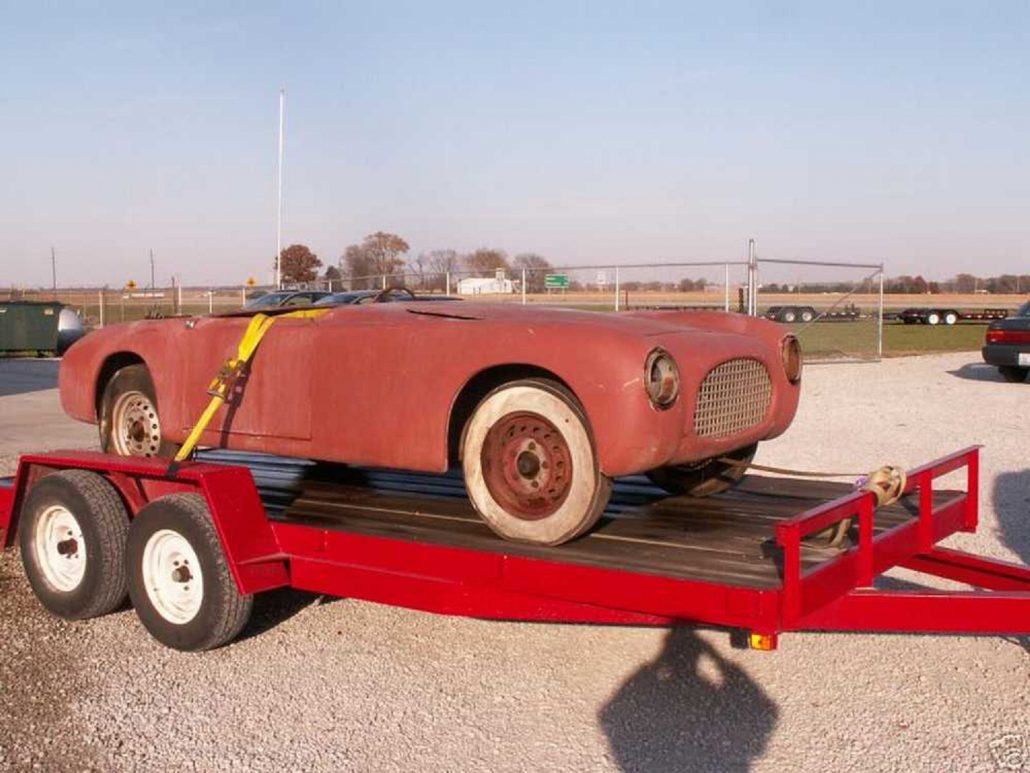 I’ve always wished to find the story on how the Allied coupe body and the roadster were found together. Perhaps the owner was going to switch bodies on the chassis as desired?

Ultimately Dick sold the coupe and roadster separately.  The coupe went to Charles and that’s when the planning started.  Work is now underway with our restoration team in Venice, Florida to fully restore the body and build the Allied as a race car for the Bonneville Salt Flats.  To my knowledge, this would make it the third Allied Swallow to race at Bonneville.  The first was in 1953 and was Bill Burke’s Allied which set a record at 167 mph for a closed coupe in 1953.  The second was in 1954 and was built by Gene Hersom with a modified Duesenberg engine.   Both are shown below. 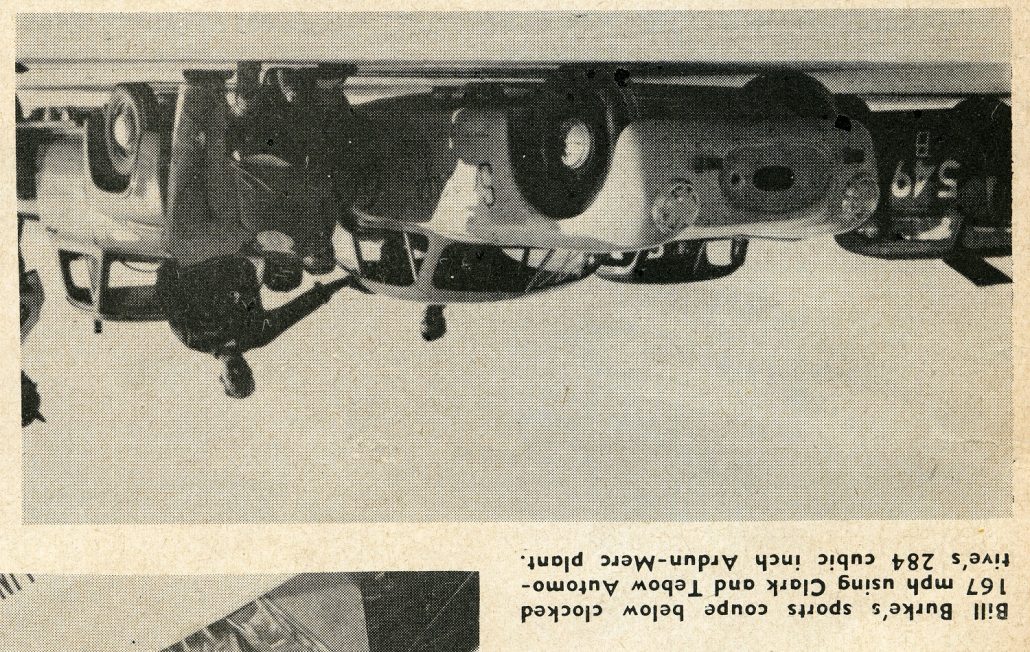 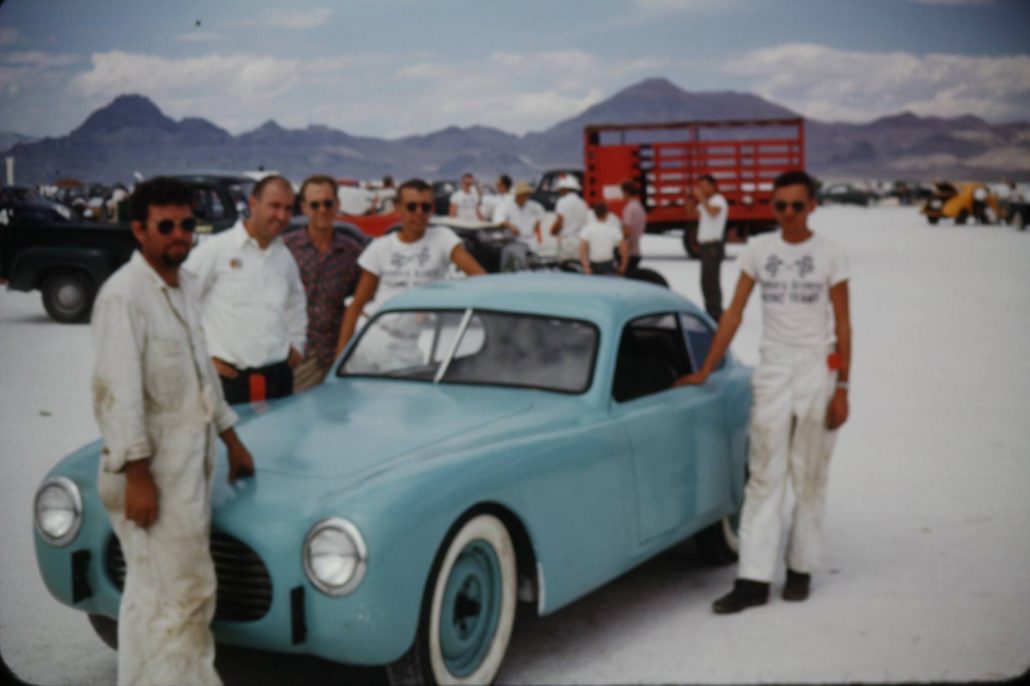 Gene Hersom’s / Kay Kime’s Allied with Half a Duesenberg engine was at Bonneville in 1954. Charles Allied in the story will be the third time an Allied Swallow appears at Bonneville.

We usually think of “straightening” as something we do with steel or aluminum bodies – but the same is true with fiberglass.  Over the years, panels warp just by aging and depending on how the body has been stored, the body might be torqued or twisted too.  Getting everything level and straight is the essential first step to any restoration or build, and in the photos below you’ll see how the team at JR’s Speed Shop is beginning the process. 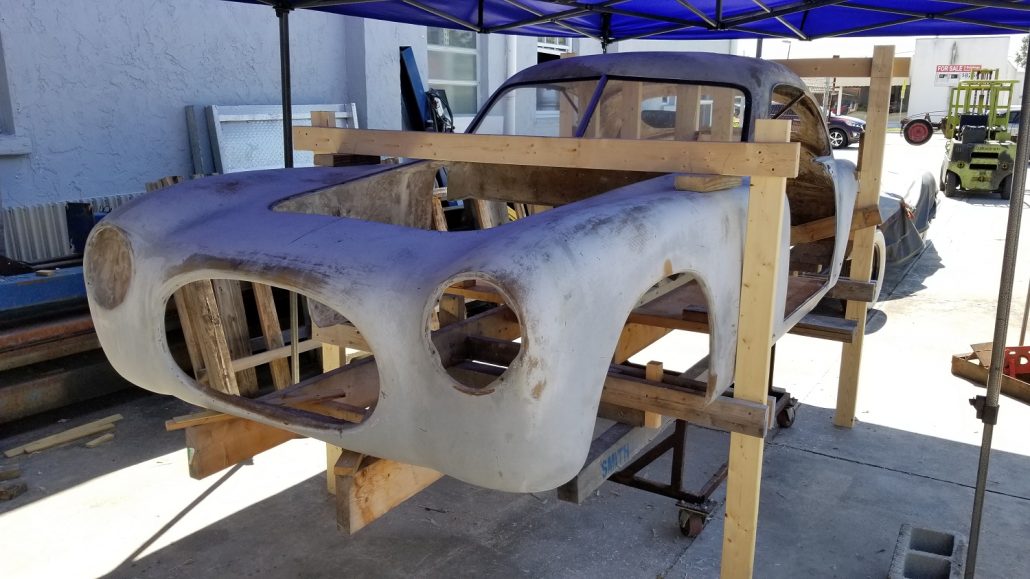 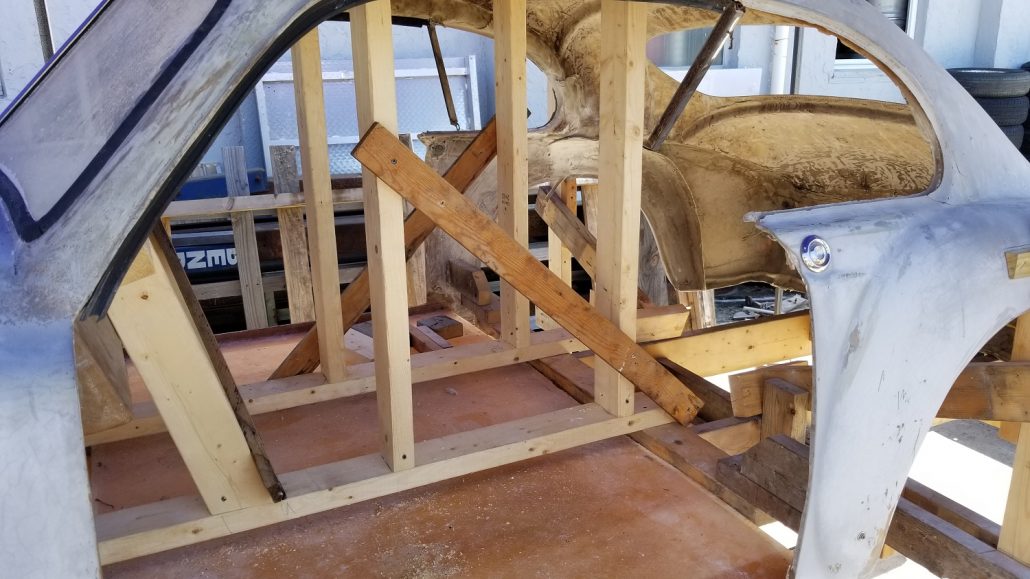 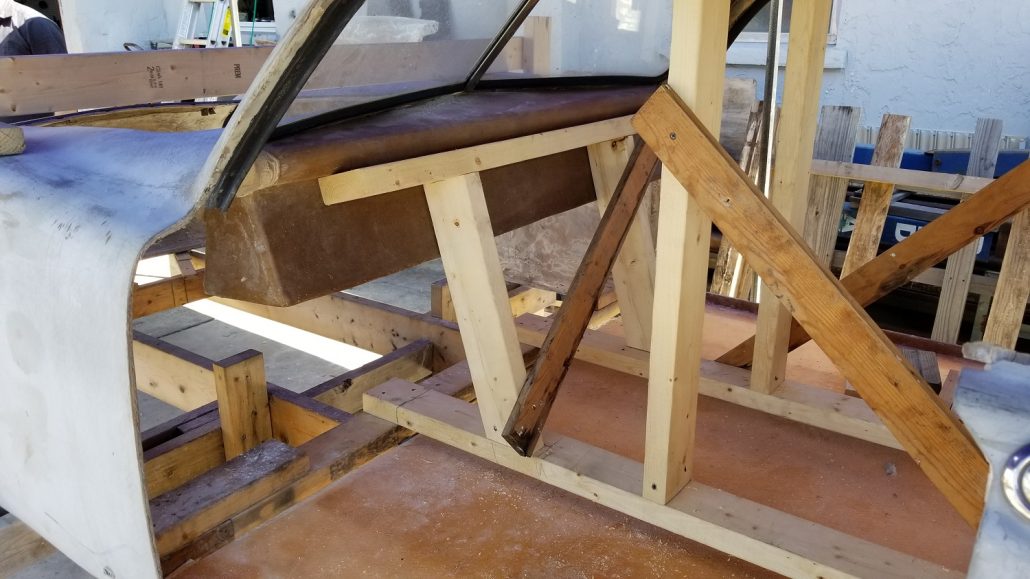 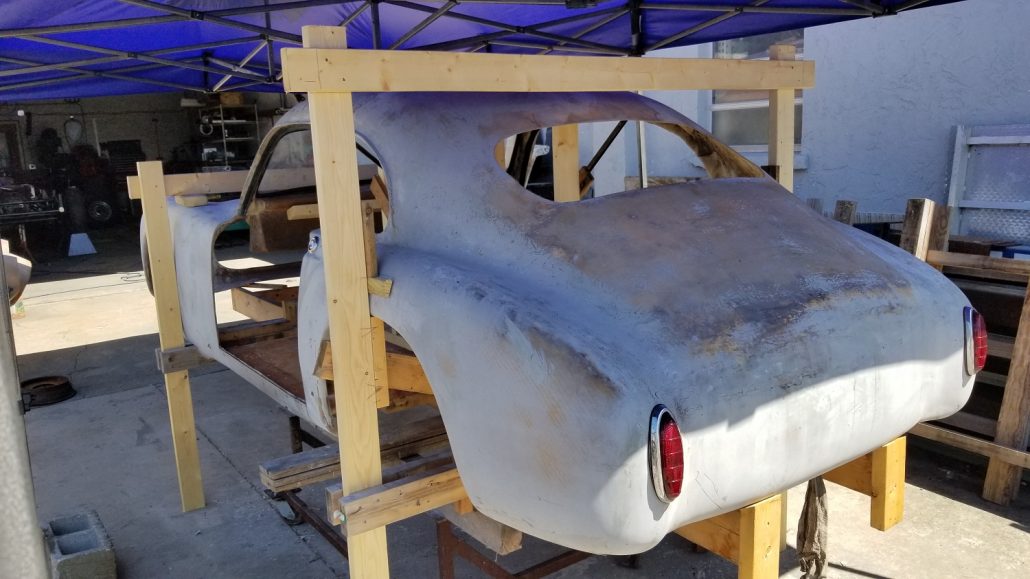 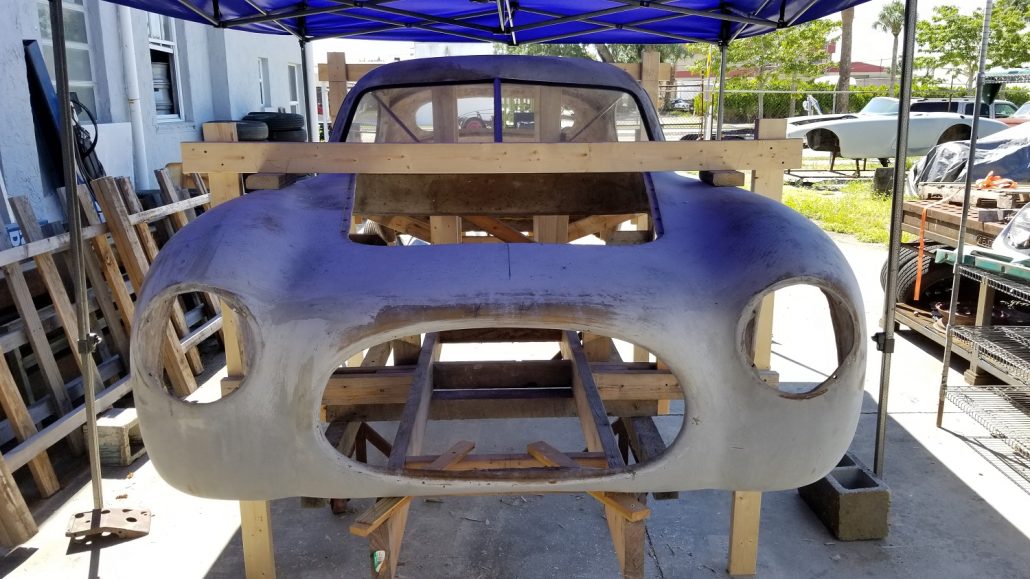 What’s the next step?  Charles is currently neck-deep into a restoration of a Kurtis-Byers SR-100 at JR’s Speed Shop.  The finished Byers will debut next year and as that car nears the end of its restoration work will begin on this Allied with a custom tube chassis currently in the planning stage.  Watch this space for word and progress on both these restorations.