More “firsts” here in the world of fiberglass.

We first covered the UK’s first fiberglass car called the Allard Clipper.  In our last story we reviewed the first plastic car in America – Ford’s 1941 Plastic car.  So let’s go back overseas again.   I’ve been sitting on lots of information about a company in 1950’s Germany called “Spohn”.  They were a custom design house, and produced an amazing amount of custom sports cars in the 1950’s – more about that in the next story.  But for now… how ’bout another foreign fiberglass fantastik…

The article below appeared in June 1955, Car Life magazine, and showcased the first fiberglass sports car from Germany.  It was built on a Volkswagen chassis, and may have been one of the first companies to utilize the VW chassis as a foundation for a new car (still researching the earliest uses of a fiberglass body on a VW chassis, and early contenders at this time are the Alken and the Devin.  Not sure they’re earlier than June 1955, though).

The 1955 Spohn Plastik had some unusual features with a basket weave texture on the sides, and a hardtop roof section that slid into a recess in the rear when not in use.  There was mention of production models of this car, but the little research I did, showed nothing on the internet (anyone wanting to lend a hand…just let me know).  And if it survives today, there is no mention of it on the internet either.

Neat car that’s worth sharing, and another of the “firsts” for fiberglass overseas.

Hope you enjoy the article… 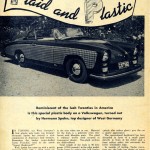 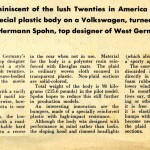 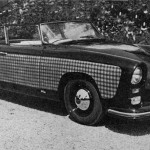