We track down history here at Undiscovered Classics with one added bonus – ours come with cars.  Now that’s cool!  And before you go any further into today’s “part 2” of the story, be sure you read part 1 via the link below:

Although Brian Meyer had just found a Woodill Wildfire with 1956 Chevrolet taillights, I remember an interesting research project I had done some years ago researching a Wildfire in a magazine with the same modifications – the Eding Special which was called the “Darciedi.”  I learned later how the name was created, but let’s go a bit back in time and review this research project.

In Search of the “Darciedi”

About 5 years ago, I came across an article that showed a Woodill Wildfire with modified taillights – but this wasn’t the only interesting feature.  It was an article from late in 1957.  Now that makes it interesting because that was after the Woodill company stopped making bodies and cars and certainly one of the last “in-period” articles on a Woodill Wildfire.  I was nearly right.

Here’s the Motor Life article from December, 1957.  It discusses the “Darciedi” built by Warren Ecling (yes that’s a mis-spelling) of San Diego. As it turns out, you can’t always believe what’s in magazines – and the internet for that matter too.

Let’s take a look at this photos and captions of the car in the article: 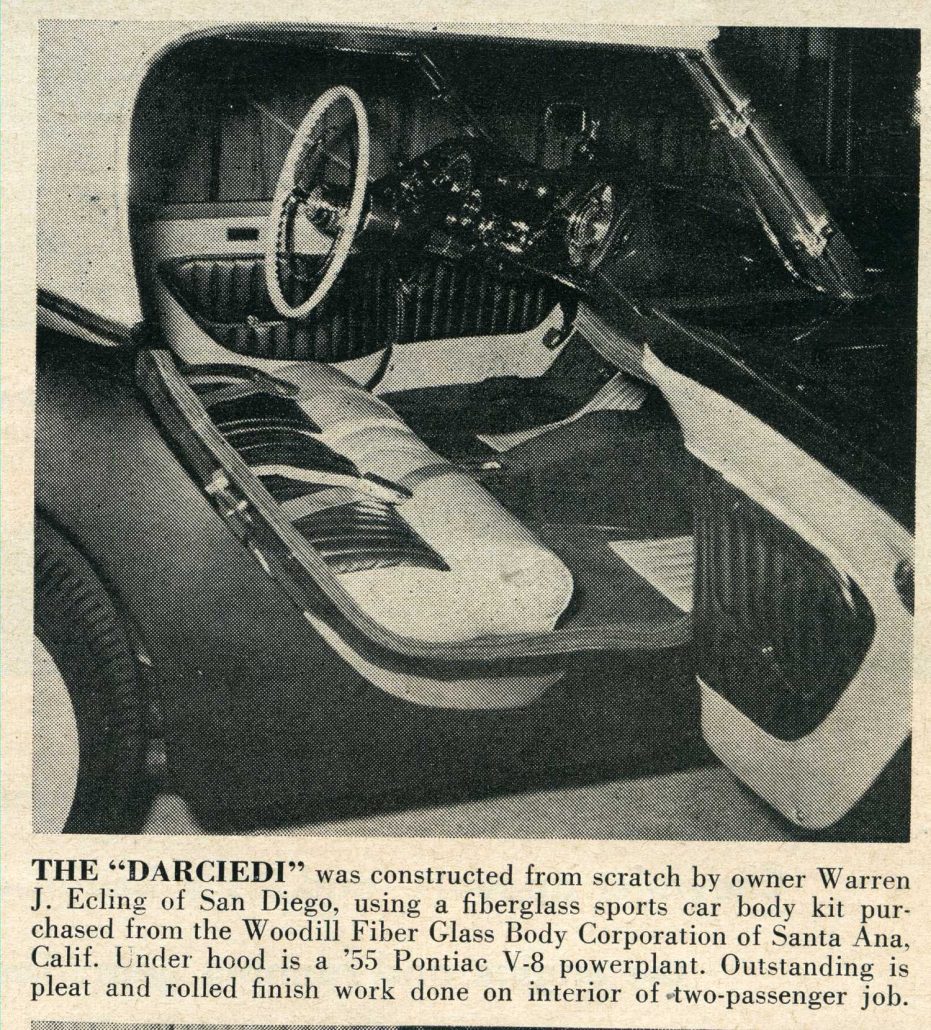 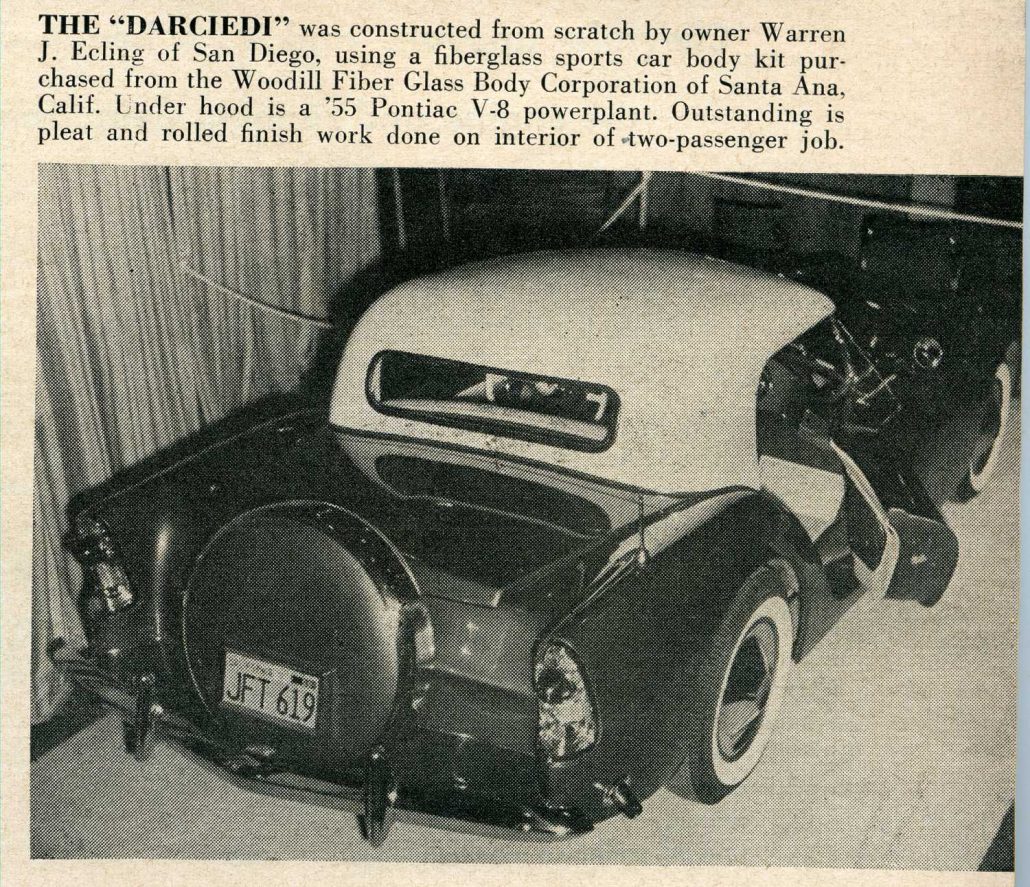 The Power of a Unique Name – For Research

I love unique names.  I can research those.  Give me a guy whose name is John Smith….too common.  But Warren Ecling – I can find him!  Sadly, when I researched “Warren Ecling” – I found nothing, but you know the reason why.  And for the time being there were no more leads to follow.

Until I found another piece of information in the September, 1958 issue of Custom Cars (yes I have a large vintage magazine collection for those of you wondering…)  Let’s have a look of the one photo and caption shown: 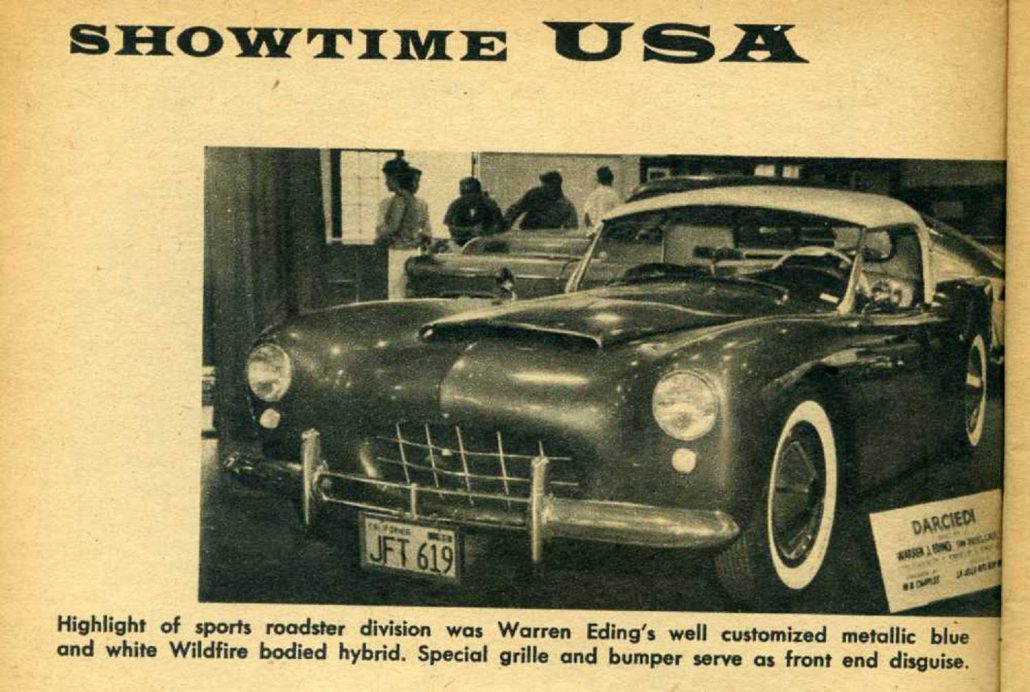 Here I had more information about the name of the car, how the front of the car looked and confirmation that the correct spelling of the builder’s name was Warren Eding – not Warren Ecling as stated in the earlier article.  I even was able to blow up the sign by the car and reveal new information as shown below. 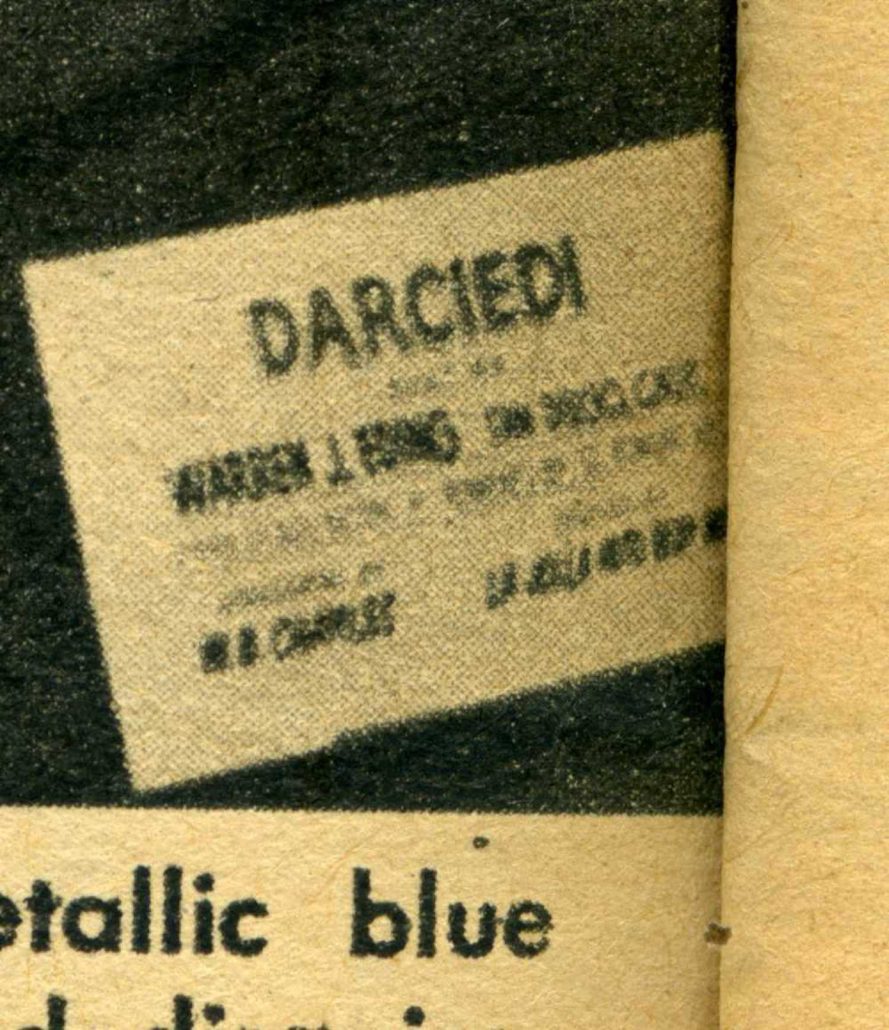 And guess what – I found Warren Eding.  He and his wife Arlene still lived in California, and I had a chance to interview them and learn more of the story on their car.  I shared this second article with the readers of Undiscovered Classics and the news that I had found Warren Eding back in October, 2014 with the promise of more information.

Click here to Read the October, 2014 Article on the Darciedi and the News We Found Warren Eding

Back in 2014 and early 2015 I pushed the research on the Warren Eding Special even further.  I remember seeing an interesting Woodill Wildfire in the Frank Cornell Wildfire archives that used 1956 Chevrolet taillights.  And it looked nicely done.  Here are the photos Frank kept in his archive on this car (thanks for being so thorough Frank) 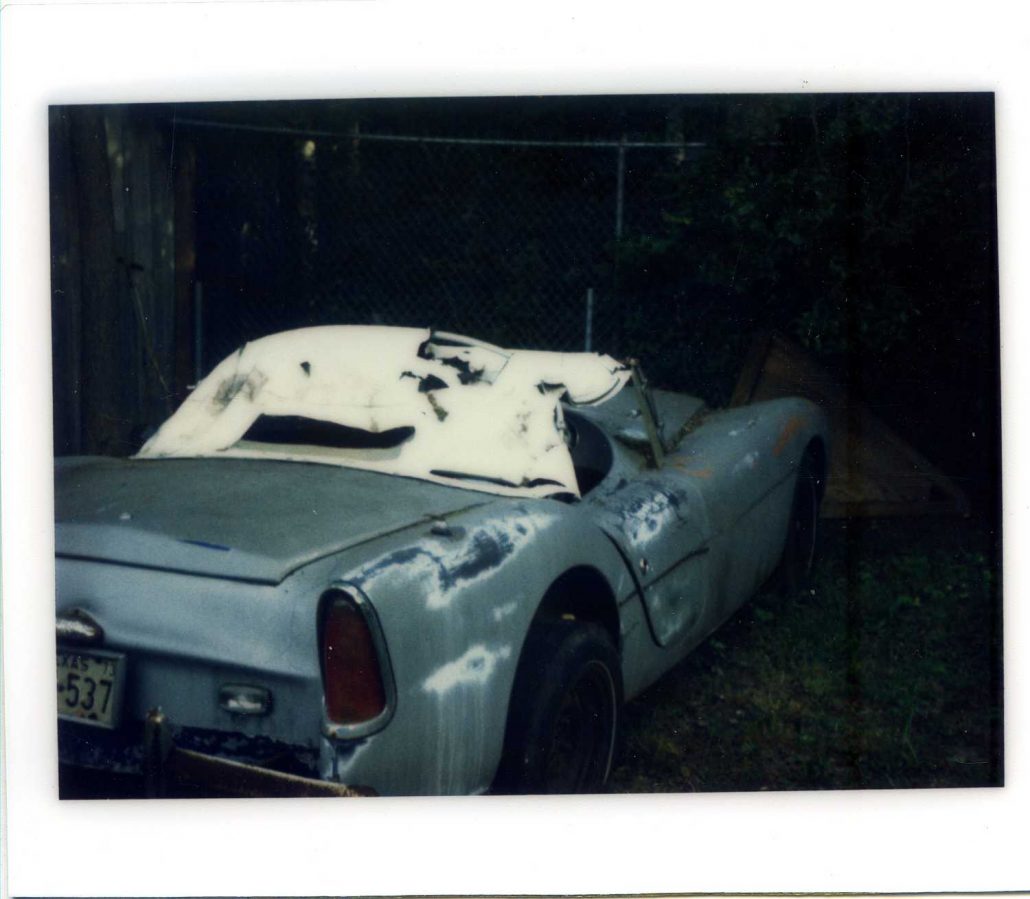 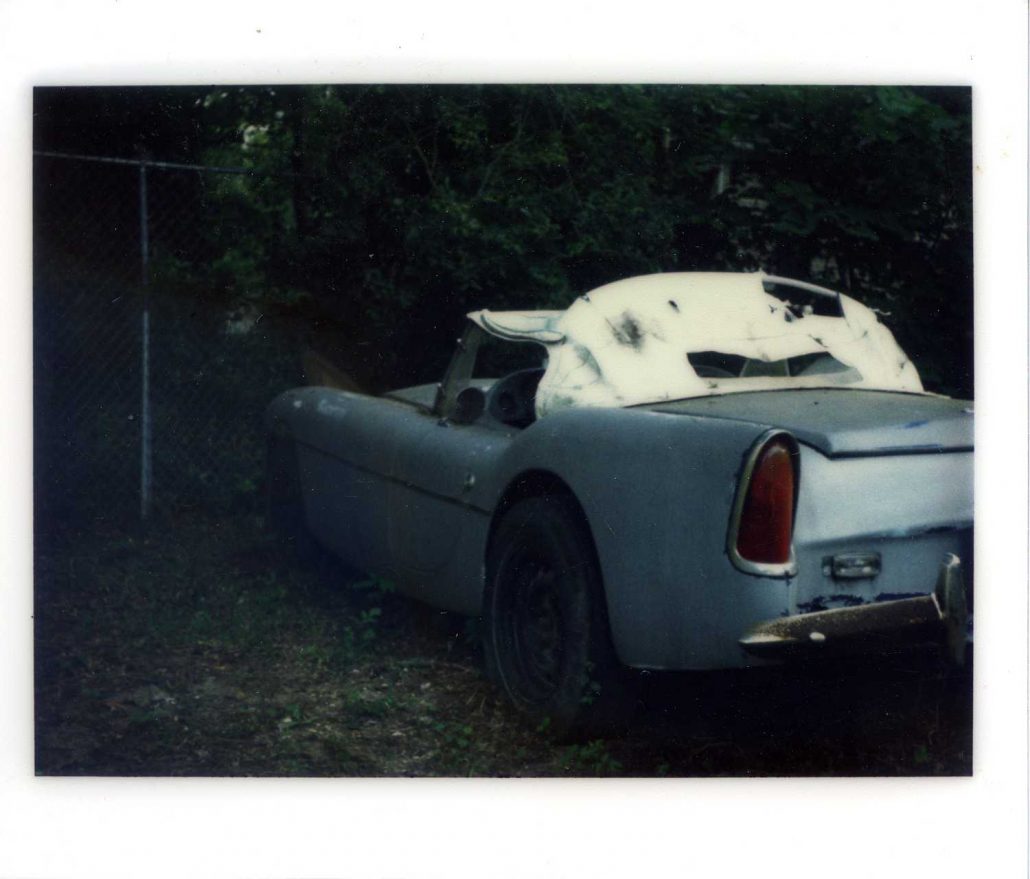 I didn’t notice it at the time but the license plates showed “Texas.”  This would become important later.  I didn’t notice it because from what I could tell, the car was owned by a person in Colorado – and there was a third photo of it there confirming its location.

Subsequent calls to the person confirmed that he did have the car, but after a short time he became unreachable, and the number went bad.  Very frustrating.  I researched the magazine articles, we found the Edings, we found the car and now the car went missing with the owner.  That later turned out to be wrong.

So I continued with the research and enjoyed conversations with the Edings and all of us worked hard to document Warren’s car.  We went through the serial number list that Frank Cornell had acquired with his research and found that Warren had bought the body on December 19, 1955 and completed paying for it on July 28, 1956.  Indeed this was one of the last Wildfires sold – three from the end of the list. Wow!

I was right about the lateness of the articles about Warren’s Wildfire too.  The last two articles published about Wildfires in the 1950s were about Warren Eding’s Wildfire.  The next article about Woodill Wildfires that was written by Michael Lamm and published in 1974 when they published a historical article  in Special Interest Autos – click here to review.

So where was the Warren Eding Wildfire?  Probably not in Colorado you might have guessed.  The clue was in the license plate shown on the photos in the Frank Cornell archives, but it would take nearly 5 years for serendipity to intervene and for Brian Meyer to find the Darciedi.  Right where the license plate said it would be – Texas.

All things will come together in part 3 of the story as well as what we learned from Warren and Arlene during our conversations.  And maybe a new photo of two of what the Wildfire looked like back then.

In the meantime, hope you enjoyed the story, and remember…